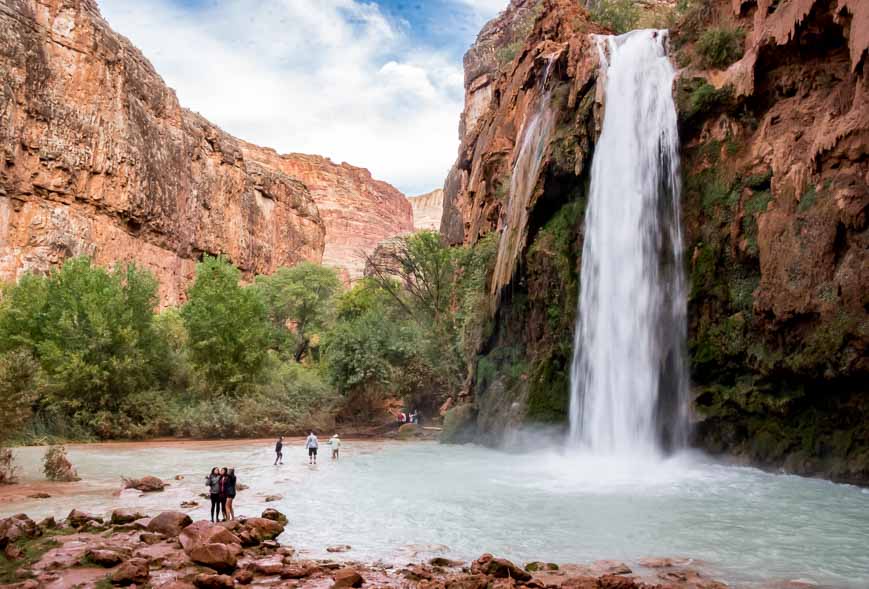 It’s hard not to be amazed by the power and the beauty of waterfalls around the world. Here are 20 of what I think are the world’s most beautiful waterfalls.

Niagara Falls is beautiful at any time but they are outstanding to see on a sunny winter morning shrouded with ice when there is not a soul around. There are two sets of falls – the other being in New York State. Both are easily accessible.

Hunlun Falls are Canada’s third highest waterfall plunging 401 metres. Located in Tweedsmuir Provincial Park, they are difficult to access unless you’re prepared to make an overnight hike or you cough up the cash for a ride on a floatplane.

Havasu Falls aren’t that high – just about 33 metres, but the contrast of red rocks and blue green waters makes them an outstanding sight to see. They’re located near the Grand Canyon.

Read: Why You”ll Want to do the Hike to Havasu Falls

Yosemite Falls, one of the main attractions in Yosemite National Park, plunges 739 metres from the top of the upper waterfall to the bottom of the lower falls. They are the sixth highest waterfalls in the world. They are best viewed in late spring when their flow is at its peak.

Thi So Lu is one of Thailand’s biggest waterfalls consisting of three waterfalls in total. It’s located on the Mae Klong River in northwest Thailand, down from the Umphang Wildlife Sanctuary.

I first heard about these falls last year when I saw photos on the blog of my friend Traveling Ted. These falls are on the Potaro River in Kaieteur National Park. They plunge 226 metres and are considered to be some of the most powerful waterfalls in the world. For comparison’s sake, they are four times higher than Niagara Falls.

Murchison Falls (sometimes called Kabarega Falls) is located on the Nile River. At the top of the falls the Nile is forced between a gap only seven meters wide and falls 43 metres into Lake Albert.

Victoria Falls, located on the Zambezi River on the border between Zambia and Zimbabwe are the only falls in the world over a kilometer wide. The mist from the waterfall can be seen from a distance of 50 kilometres. During the dry season one can walk through part of the waterfall.

These falls are located in southern India on the River Kavari. The falls aren’t large – only about 20 metres – but they are extensive.

The Baatara Gorge Waterfall in Lebanon

The Baatara Gorge Waterfall is located in Tannourine, Lebanon on the Lebanon Mountain Trail. These falls have a drop of 255 metres.

The Ouzoud Falls are located 150 kilometres northeast of Marrakech in the Grand Atlas village of Tanaghmeilt. The falls are 100 metres high over three drops.

Angel Falls are the world’s highest uninterrupted waterfall boasting a height of 979 metres. The waterfall is located in Canaima National Park.

Probably one of the most photographed falls in the world, Iguazu Falls lies on the border of Brazil and Argentina. Most of the falls are on the Argentine side. The longest drop is 82 metres.

Located in north central Iceland, Godafoss Waterfall is one of the most spectacular in the country. The water falls 12 metres over a width of 30 metres.

Skogafoss Waterfall is one of the biggest in Iceland with a drop of 60 metres. It sits in the south of Iceland on the Skoga River.

The Plitvice Waterfalls are really a network of 16 lakes connected by waterfalls. They are considered by some to be the most beautiful in the world.

Latefossen, a well known tourist attraction, is a set of waterfalls in western Norway with a height of 165 metres.

Which one of these waterfalls do you think is the most beautiful?

One of the best ways to discover Canada in the summer is via a canoe.…

Even though I've finished my book - Discover Canada: 100 Inspiring Outdoor Adventures, it doesn't mean that I've…