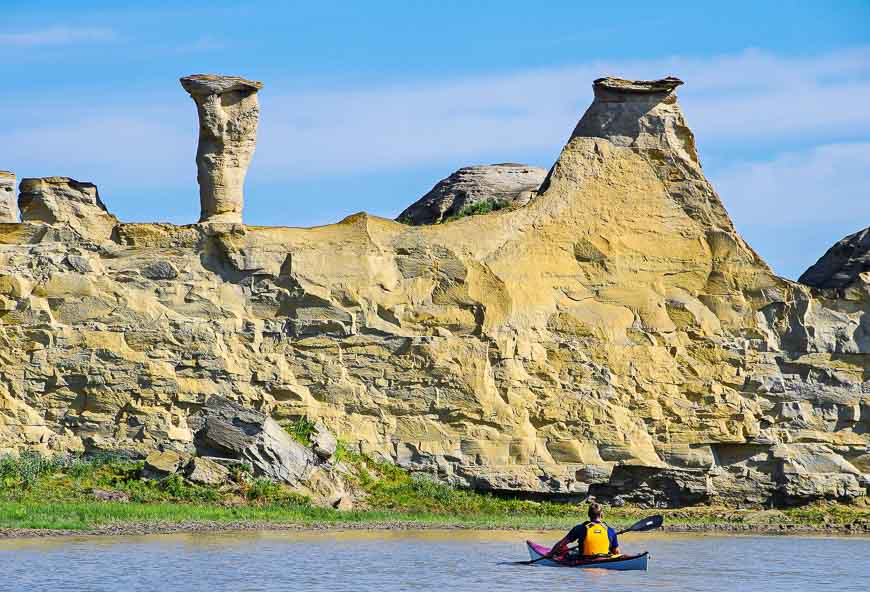 The Milk River, named for its milky colour by Lewis and Clark back in 1805, flows north out of Montana into southern Alberta and then back into Montana again. Over its 1,173 kilometre length, there is a fantastic section that can easily be done as a 3 day canoe trip beginning in the town of Milk River, Alberta.

Logistics for a canoe trip on the Milk River

John and I rented a canoe from Ken Brown of Milk River Raft Tours (Ph: 403-642-7619) and my brother joined us with a boat in a bag – AKA a Trak kayak he had on loan for the long weekend. We handed our car keys over to Ken who then shuttled our car for $50 to our take-out point in Writing-on-Stone Provincial Park.

Launch from the town of Milk River, Alberta

It was a sunny, hot day as we launched from the local campground in Milk River. Our plan was to paddle 20 kilometres to Gold Springs – a private campground that is popular with the RV crowd.

Most of the first day’s paddle was spent admiring the birds – including a great-horned owl and five ospreys within 10 minutes of launching. Swallows were everywhere too – and were our constant companions along the length of the river.

We also had to get in the groove of reacting quickly to the water. There are plenty of rapids – mostly Class I and easy enough to paddle – except that the river is shallow and there are a lot of rocks to avoid.

I went to bed that night thinking – paddle left HARD, go straight, rock on right. We certainly bumped into a few of them and ran aground a couple of times – but nothing more serious than that over the entire 73 kilometres we paddled.

The campground at Gold Springs

When we pulled out at Gold Springs, we felt like we’d gone from relative desolation to full on civilization again. But we were lucky enough to snag a campsite right by the river, between two RV’s.

One was empty and the other stayed that way until the storm hit so we did feel like we had some personal space – something we all like on a wilderness trip.

We woke on the second day to chilly temperatures and spitting rain. I was happy it wasn’t pouring and windy considering our tent had been rattled and shaken for hours during the night. Thank heavens we didn’t get the hail that Calgary had that day!

Our tent would have been toast. At Gold Creek there is a picnic shelter so we could eat breakfast without getting wet – an advantage to semi-civilization.

Once on the water we knew it was going to be nothing but rapids for the entire day. In fact the area between Gold Springs and Poverty Rock is known as the Rock Garden and more than a few canoes have met their demise here. The average gradient according to the map is 2.4 m/km.

We wore rain gear all day long though it actually stopped spitting the minute we got in the boat. Still, it was hypothermia-type weather and we wanted to stay warm.

It’s 20 kilometres from Gold Springs to the turquoise-green coloured Coffin Bridge – named for Frank Coffin who came to the area with 200 head of cattle in 1902.

On this section there are only a handful of places to pull out; around the bridge itself, it’s quite steep. Some people drive to Coffin Bridge to put in – as we discovered on arrival at Poverty Rock.

A couple of the rapids in this section of the Milk River are Class II or Class III if the conditions are right (or wrong depending on how you like your rapids.) It took us about 90 minutes to get to Poverty Rock from the bridge.

Once there we were met with the sight of about a dozen canoes. As we hadn’t seen a soul on the river we figured we’d have Poverty Rock to ourselves. No such luck – so we just humped our stuff away from the main group – and once again felt a sense of privacy.

The large group at Poverty Rock had put in at Coffin Bridge. They had lots of young kids with them so I can understand their reticence to do a full day of rapids.

At Poverty Rock there is a cooking shelter, an outhouse and several garbage cans. It’s managed by Alberta Parks but there are no fees to camp here.

Poverty Rock itself begs to be climbed. But the whole area around it is also fantastic for hiking. We walked for well over an hour, climbing high above the area to enjoy the views.

Do watch out for rattlesnakes around the rocks. Ken, the fellow that rents boats informed us that “the rattlesnakes are blind right now as they shed their skin so they sense you by vibration only.” Don’t put your hands in any holes and watch out for sunning snakes on rocks. (We saw none.)

The section from Poverty Rock to Writing-on-Stone Provincial Park is the easiest and I think the most scenic section on account of the huge number of hoodoos.

We did it in 3.5 hours including breaks. One of our stops was across from the nest of a big horned owl. With binoculars you could see inside the nest from across the river – and in it were three owlets.

You can also pull out (and arrange the shuttle) at Weir Bridge, 10 kilometres into the paddle. I’d recommend continuing to Writing-on-Stone for the scenery, though there’s a good place for a break just after the bridge.

When to canoe the Milk River

The Milk River flow is constantly shifting. It tends to be highest in June and early July. The flow drops off considerably over the summer so the paddling can be very difficult with the large number of rocks. It’s best that you have some experience before attempting it.

Also beware of rock fall from the cliffs and slumping – of which there is plenty especially after a heavy rainfall.

No reservations are required though at peak times it might be handy to make one for Gold Springs Park (Ph: 403-647-2277). Also consider picking up the map – A Paddler’s Guide to the Milk River. 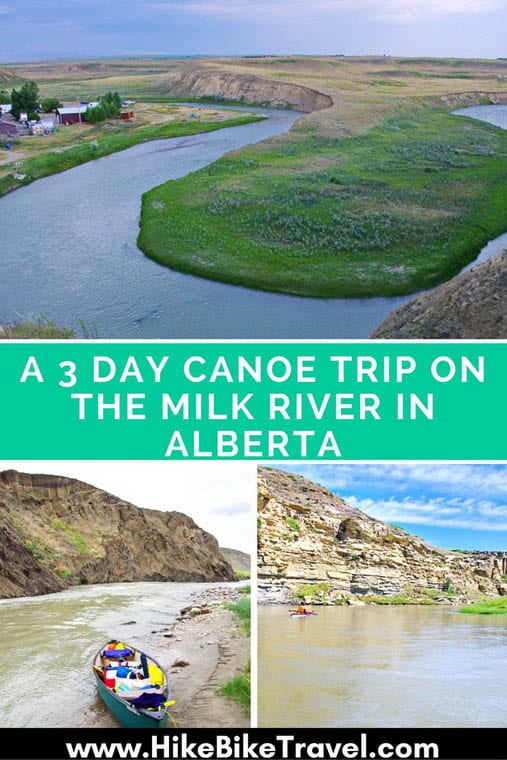 Thank you to Travel Alberta for sponsoring the trip. If you’re an intermediate paddler or better you’ll love the experience.