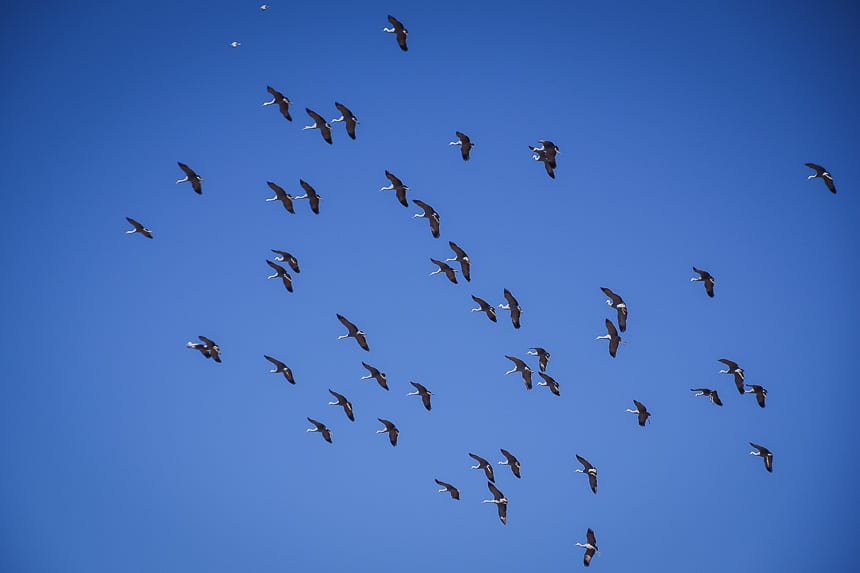 A Trip to See Sandhill Cranes in Arizona

My husband John is a very good sport about joining me on adventures, whether they interest him or not. Fortunately most do. But like any marriage there needs to be give and take so since he is an avid birder I agreed to several hours of birding – mostly to see the sandhill cranes in Arizona.

Specifically we visited Whitewater Draw, a globally important bird area in the southern part of the state. Don’t get me wrong. I love birds and have a good eye for new species. But I don’t have nearly the patience to watch them for hours the way he does. At least with sandhill cranes there is no mistaking their presence and you don’t have to wait for them to flush from the bushes.

We had traveled to Cochise Stronghold, almost due east of Tucson to hike in the Chiricahua and Dragoon Mountains. With extra time we were able to fit in a trip to Whitewater Draw.

It’s about an hour’s drive south of Wilcox, the largest town of note in the area. Finding Whitewater Draw wasn’t obvious. It was almost as though they didn’t want hordes of people showing up. We saw perhaps another half dozen people when we visited.

Sandhill cranes usually begin to arrive in the area in October and most of leave by mid-February to mid-March. According to an article in the Arizona Range News “the Arizona Game and Fish Department estimated more than 23,000 sandhill cranes in the valley earlier this year, with the largest concentration of 15,343 at Whitewater Draw”.

Usually cranes hit the skies at dawn to feed on grain from farmer’s fields and return somewhere between 11 and 4 PM. I don’t know how many sandhill cranes were in attendance when we visited around noon, but whatever their numbers it was a sight to see them on masse squawking away.

Take Highway 191 to Davis RD. Make a right turn onto Coffman RD, then a left turn and finally 2.5 miles.

Sandhills are the most common of the cranes.

The average lifespan in the wild is 20 years.

Sandhill cranes have a five to six foot wingspan and weigh between 3 – 6.3 kilograms.

Visit Nebraska’s Platte River in spring if you want to see as many as 50,000 sandhill cranes at one time. The San Luis Valley in Colorado is another major stopover.

It can get very noisy during mating season when pairs vocalize.

Nests are situated in shallow marshes or wet meadows.

Cranes lay two eggs but usually only raise one young per year.

Food ranges from plants to mice, snakes, worms and insects. Grain is also part of their diet and they’ve been known to cause significant damage to farmer’s fields.

When you’ve had enough of watching the sandhill cranes in Arizona take a walk on the trails in the area, especially around the ponds and you’ll see a very large number of bird species. 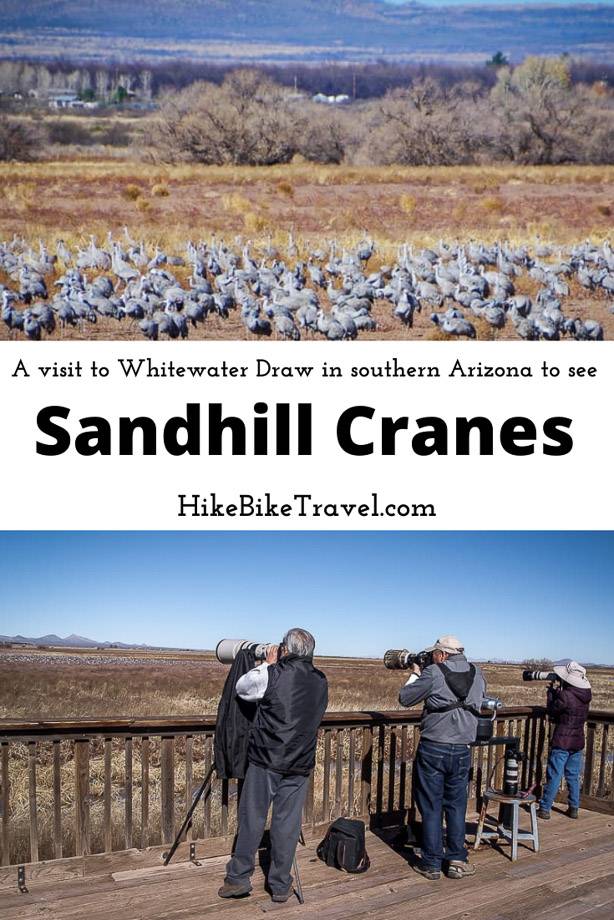