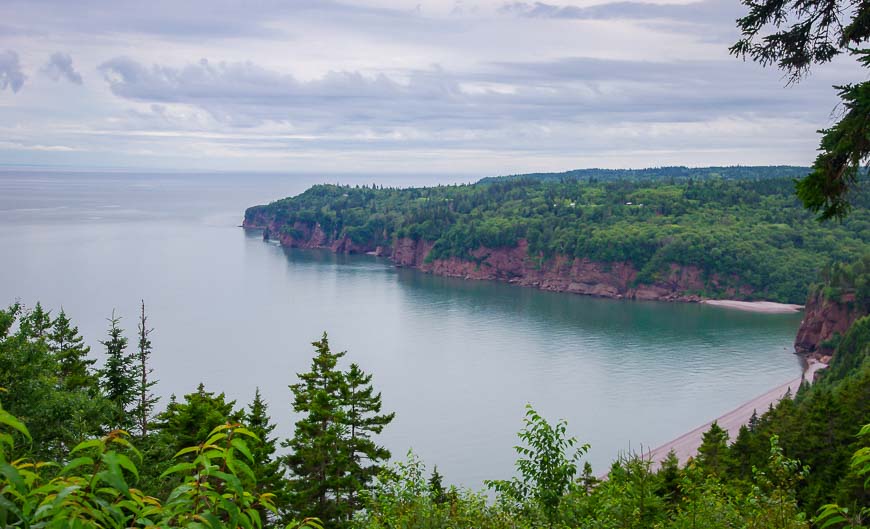 While most people drive the popular Fundy Trail Parkway, a 30 km paved coastal road, it’s also possible to enjoy it via a strenuous bike ride or hike. The parkway, located just 10 km east of the village of St. Martins, is being lengthened. In 2020 the Fundy Trail is scheduled to connect to Sussex and in 2021 to Alma. The trail is easily accessed from Saint John or Moncton but don’t confuse it with Fundy National Park which lies further to the east.

If you’re looking for far-reaching views and coastal wilderness along with lots of stops and viewpoints the Fundy Trail is for you. Enjoy 21 lookouts, three waterfalls and beaches at four different places along the route. A suspension bridge, Flowerpot Rock and a sea captain’s burial ground are some of the other not to be missed sights.

Fundy Trail Parkway – what to know before you head out

Before heading to the trail, whether you’re biking or driving, fuel up in St. Martins as there is nothing to buy on the parkway itself. It’s not a hardship with roadside stands offering tasty lobster rolls, ice cream cones and other high calorie but delicious fare.

What you should know about biking the trail

I’d come to bike the Fundy Trail. Most people don’t. They drive it and there is a reason for that.

There are hills – bloody big hills with grades of up to 17% and although they might be short they’re still lung bursting and tough. I’m used to the Rocky Mountains but in my arrogance I discounted the difficulty that I would find on the east coast.

You can still access the parkway the rest of the year but by using human power only – via biking, hiking, skiing or snowshoeing.

I rented a bike at the entrance to the parkway. If you can, bring your own. I felt like Wilma Flintstone on my bike. The breaks were almost non-existent – and I had chosen one of the better ones – so on the descent I used my feet to break leaving the smell of rubber behind. I also pumped the hand breaks as hard as I could and thank the powers to be that there was hardly a car on the road the day I did it.

Let me explain what I ended up doing.

I had limited time, perhaps three hours in total. I started off on the bike trails – which at the beginning were very easy. Then they steepened to the point that I had to walk my bike and I NEVER walk my bike.

I was wondering what was wrong with me and it wasn’t until I moved to the road that I understood that I walked a section with either a 14% or a 17% grade. However the bike path – which is the same as the hiking path – enjoys better views and easier access to the numerous viewpoints.

One of the first side-trips I did was to Fuller Falls. Although accessed via a set of rickety steps the falls themselves are very beautiful and in fact are considered to be one of the Fundy Biosphere Reserve Amazing Places.

I passed marked viewpoints with scenes like the one in the photo below. On a sunny day the place would be glorious.

But eventually I gave up on the path and moved to the road in the hopes of making speedier progress. I did but I still had doubts about making it to the far end and back in my allotted time.

If you start to run out of time

So I cheated – well sort of. I cycled most of the way to the Visitor’s Center and turned back perhaps half a kilometre shy of it. Then I whooshed down the parkway – great fun really – all the way to the car.

I returned the bike and suggested to the staff that they might want to do a little bike maintenance before hopping in my car and driving to the far end of the parkway.

I’m so glad I did what I did. The hills were really big coming out of Big Salmon River but the views were the best of the entire parkway.

The trail is very popular with families. With so many viewpoints and side trails you could easily spend a half day here.

Interestingly you used to be able to make a night of it at the Hearst Lodge (of Hearst publishing fame). Check periodically to see if the place reopens.

If you make it as far as Saint John or Moncton then I highly recommend getting a taste of the Bay of Fundy Coast by driving or biking the parkway. Go on a sunny day if at all possible when the views will be at their best. 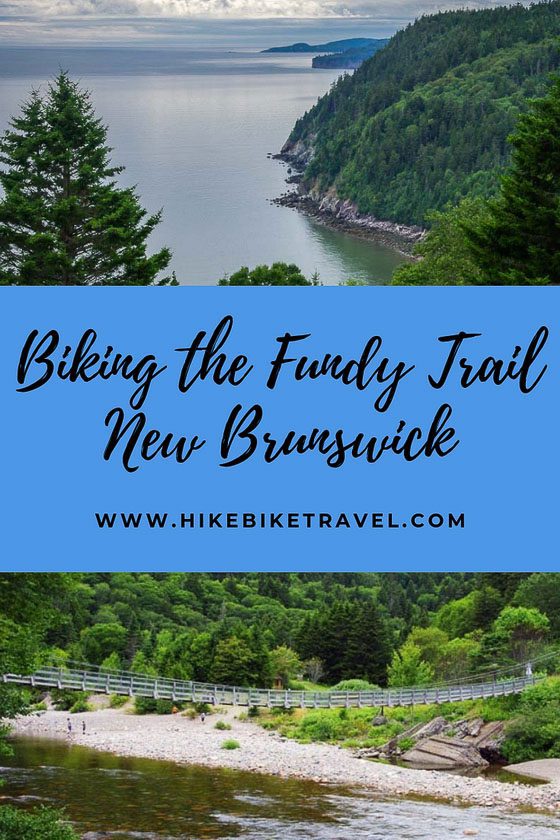