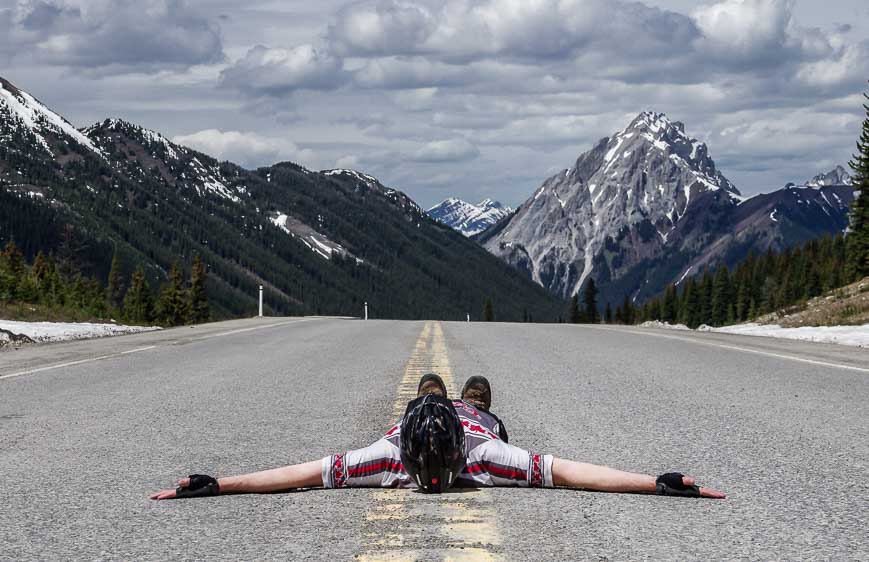 I celebrated my birthday one year by taking the day off and heading with John to Kananaskis Country, Alberta. Our plan for the day was to cycle to Highwood Pass on the highest public road in Canada. We chose to do the more gradual route from the entrance closest to the community of Longview, accessible via a 1.5 hour drive from Calgary.

This bike ride had been on my wish list for several years. But I’d always wanted to cycle to the pass during the narrow window when the road is snow-free and cars aren’t allowed. There are three weeks at most in a year that you can do that. Starting June 15th cars are allowed.

The snow pack on the road can vary greatly from year to year. Some years, even in June, you will be turned back by snow pack.  But during a warm spring, the road clears more quickly. Use your judgement and be prepared to turn around. Also take extra layers of warm clothes as the descent can be frosty some days.

The best way to do the bike ride up Highwood Pass

The ideal scenario for this bike ride would be a one way trip where you start at the gate nearest Longview, cycle 37 kilometres to Highwood Pass and then descend 17 kilometres on a road with a much steeper grade to the gate by King Creek.

If you were climbing from the King Creek Trailhead, part of the road would be Category 1 – the steepest grade the bikers on the Tour de France climb.

In 2013 the road was closed once the floods hit. You can see the devastation in many places – but especially at this bridge which washed away. The work is all done and the roads are in amazing shape. The roads get swept just before they open to cars and are in better shape than the ones I see in Calgary.

The beauty of doing the bike ride before the cars are allowed on the road is the pure freedom of having the entire road to yourself. It’s absolute bliss. The road has a wide shoulder so even if you cycle it from now through the summer, there’s never a problem with having enough room to feel safe.

The grade on the road to Highwood Pass, coming from Longview, is generally gentle. There are plenty of occasions where you get a good ride down and it’s really not until you reach Peter Lougheed Park and the last four kilometres that the road steepens.

There are numerous recreation areas along the highway – complete with washrooms and picnic tables. They make good rest stops.

The summit is notoriously windy though it wasn’t bad on the day we were there. Do bring warm clothing and rain gear as you top out at 2,206 metres (7,238 feet). The difference in temperature between your starting point and the pass is very noticeable.

We both carried cans of bear spray as we had heard from others that they had seen grizzly bears up here in the past. We saw plenty of scat – and moose poop too, but the only animals we saw were the Rocky Mountain sheep.

How long does it take to cycle to Highwood Pass?

All told it took me 2¾ hours to cycle to the pass, with plenty of stops for photos and a few refueling stops. On the return it took us about 2 hours. We did cycle down the other side of the pass but didn’t go far as the grade is extreme for the first five kilometres and we had to be home by a certain time. That at least, was my excuse.

It’s a long way to drive between the two trailheads – over two hours, so shuttling cars doesn’t really make a lot of sense.

Most people seem to ride to the summit from one of the starting points and return the same way. If you’re a very strong cyclist then you could ride up and down – a total distance of about 108 kilometres with a vertical gain of up to 1,267 metres (4,157 feet).

No matter how you do it, you will feel pretty darned pleased with yourself once you reach the pass. Go prepared. Bring lots of water and food along with warm clothing and rain gear.

Where to spend the night on Highway 40

There aren’t many options. There is some camping in Peter Lougheed Provincial Park but you need to bike a dirt road to get there. Click on the Alberta Parks camping website to learn more.

In Kananaskis Village there is a Wilderness Hostel. For a higher end experience, choose the Kananaskis Mountain Lodge. 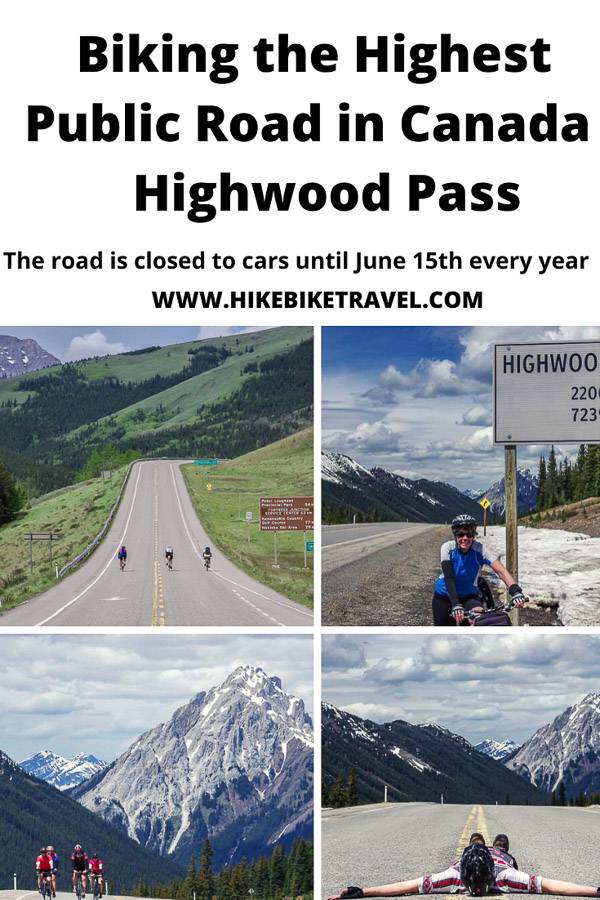