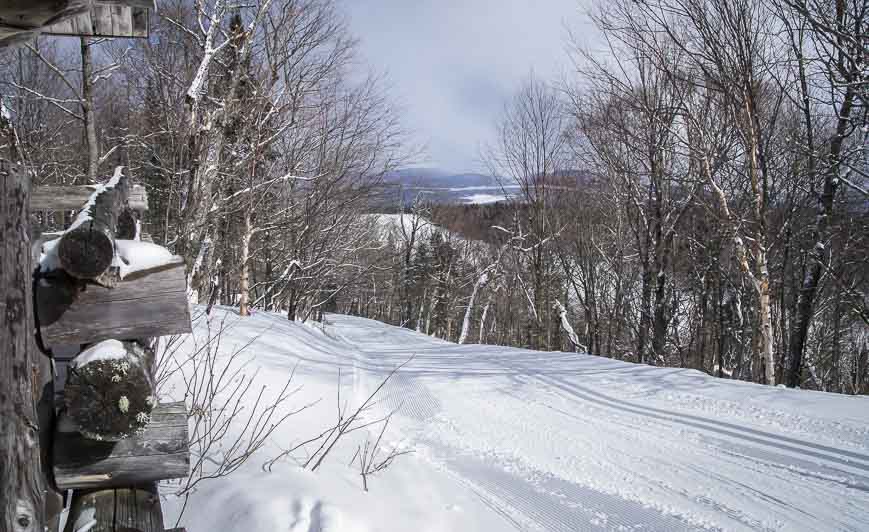 The view from the Refuge Saint-Anselme

Mont Sainte Anne in Quebec is best known as a downhill ski resort but I’d recommend visiting for the phenomenal cross-country skiing on 200+ kilometres of trails. Mont Sainte Anne, one of the mountains in the Laurentian mountain chain, is located about 40 kilometres northeast of Quebec City in the town of Beaupré.

The cross-country ski area at Mont Sainte Anne (Ski de fond in French) is just seven kilometres up the road from the downhill area in the village of Saint-Ferréol-les-Neiges. Those kilometres make a difference. From the downhill resort, it’s a climb all the way to the parking lot – so when it might be raining at lower elevations, it could very well be snowing at the Nordic Center.

With an annual snowfall of over 400 centimeters (13 feet) per year you can almost always count on the snow. On our recent trip to the east, Mont Sainte Anne had the best snow of the four places we skied at – and that’s saying something as they all had good snow this year. (Others included Algonquin Park, Gatineau Park and the Mont Tremblant area in the Laurentians.)

Why is Mont Sainte Anne a delight to cross-country ski?

The sheer choice of trails is fantastic. They bill themselves as the resort with the largest number of cross country ski trails in Canada. There are over 200 km of trails if you do them as loops. Of that 191 km are available to skate skiers.

There is plenty to choose from across all levels of difficulty. John and I generally head for the most difficult trails as we like a workout and the solitude that these trails usually provide.

Pierre Vézina, the manager of the area who’s been working at the resort for decades, tells me that the black (most difficult) trails were specifically designed for the first major international race to be held in Canada – The World Junior Nordic Championships in 1979.

We chose to ski trail #24, a black trail that took us way up into the hills. The trail was drop dead beautiful, the ski tracks were as expertly groomed as any I have skied and we had the pleasure of following a moose.

We didn’t see the moose but the moose tracks were in those of a skate skier who was ahead of us. We were told that moose are very commonly seen – and they don’t like to move so be prepared to turn around if that is the case.

Our lunch stop was at the Refuge St-Anselme, one of five sprinkled around the park. Views over to the north side of the Mont Ste Anne ski resort were excellent.

From this warming hut it’s almost all downhill to the parking lot so once you’ve made it here rest assured that the rest of the skiing is easy. However, the downhill stretches might be very cold because of the wind-chill.

We chose to explore the 11.5 kilometre trail running on either side of the Rivière Jean Larose. Although the trail was beautiful, it didn’t afford the big vistas that we had come to love the day before.

Where to stay near Mont Sainte-Anne

We spent the night at the base of Mont Ste-Anne at the very lovely and newly renovated Château Mont Saint-Anne. From our dinner table we could watch the night skiers coming down the hill. The thought of some night time downhill skiing crossed my mind but I quickly banished that thought when I considered the temperature –  about -18 C, too cold for me.

But the hotel is as ideally situated for downhill skiing as you could ask for.

The Nordic area at Mont Sainte Anne is open from 9 AM until 4 PM, except on weekends when it opens at 8:30 AM. The season is a long one so if you’re a local a season’s pass could make sense. The trails usually open sometime in November and close after the first weekend in April.

Onsite there is a place to rent and buy skis, boots and clothing. You can also get your skis tuned up here. In the same building, located adjacent to the parking lot, you can purchase food and drinks and warm your feet by a toasty fire.

Despite the price I’d ski here again – because of the snow, the variety of trails and the expert grooming. And next time I hope to see a moose.

For more information on the cross-country skiing visit their website. 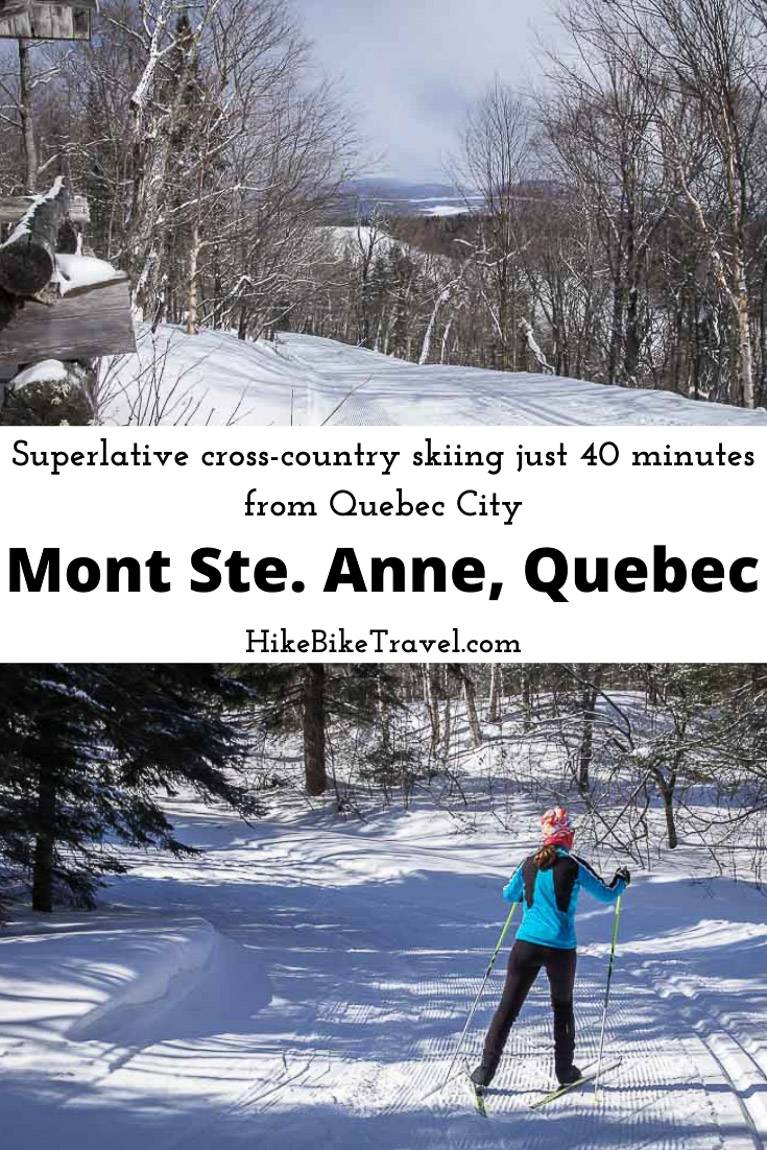