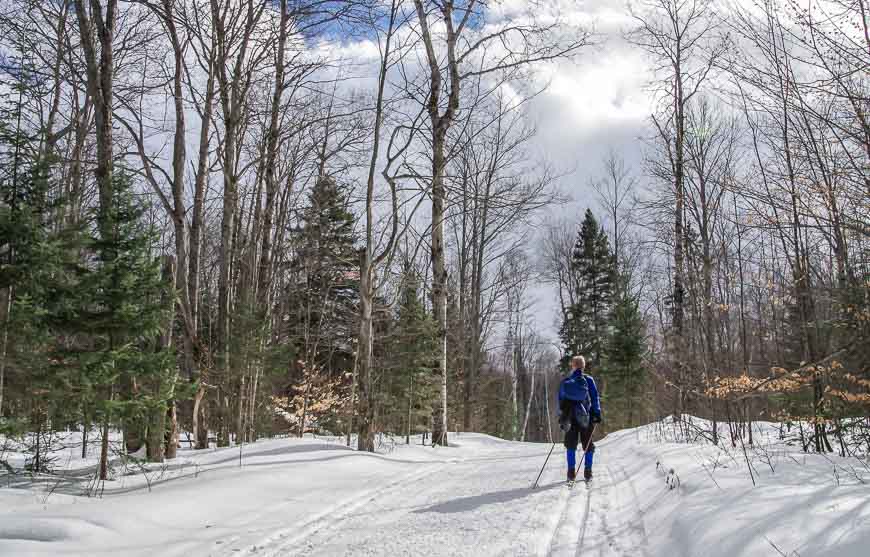 I was on a working-holiday kind of trip through eastern Ontario and Quebec….in winter. The first stop on our itinerary was for some cross country skiing in Algonquin Park, about a three hour drive northwest of Ottawa.

Algonquin Park is a very special place in winter. It’s exceptionally beautiful especially on a blue-sky day after a fresh snowfall when conifers can be seen drooping with heavy loads of snow and frozen lakes offer up an unbroken expanse of pristine and untouched wilderness. There are no crowds to speak of either. You’re more likely to run into a moose or a wolf than a human – a slight exaggeration, but only slight. The cross country skiing in Algonquin Park is sublime.

I don’t know too many people who willingly opt for a winter holiday in Canada – let alone in a park where one of the major winter attractions is simply cross country skiing.

But Algonquin Provincial Park, is an underrated winter gem. It’s gorgeous. The trails are lovingly maintained. Warming cabins are heated by wood – and are warm before you arrive.

There’s a very good chance of seeing wildlife especially pine martens at the warming huts. And Algonquin Park has the best trail signage of any cross country ski place I have ever visited.

Three areas for skiing in the park

There are three areas within Algonquin Provincial Park for cross country skiing.

The Leaf Lake trails are considered to be the best of the lot but they are close to the east entrance. Not everyone wants to drive across the park if they’re coming from Toronto – especially in winter conditions so you may have to try the Fen Lake Ski Trail near the West Gate or the Minnesing Trails at kilometre 23.

The Leaf Lake Trails offer multiple loops of varying difficulty. The difficult ones require a lot of climbing but the reward is some awesome downhills. There are enough easy loops close to the trailhead that skiing here can be very enjoyable for families.

The Pinetree Loop in particular has been called the premiere ski trail in all of southern Ontario. While it offers plenty of hills, there are also some wicked fun downhill stretches.

The 5 km Fraser Lake Loop is another of the more difficult trails, but the views from the high point offer quintessential Algonquin Park scenery and make the climb up entirely worthwhile.Thistle Cabin, located at the southern junction of the Fraser and Thistle Lake loops is another convenient place to warm up.

No crowds in Algonquin Park

There weren’t crowds. In fact we only saw ONE other skier all day. We did see a couple of rangers on snowmobiles – one taking a group of Canada Goose folks (the people that make some of the warmest winter parkas on the planet) around and another ranger, Kirk, who kindly groomed the trails just ahead of our arrival. He also gave us the lowdown on the park as he’s worked in it for over three decades.

But why should you drive to a deserted park in the middle of nowhere in the winter?

Maybe the photos of our cross country skiing Algonquin Park will answer the question.

There is a daily fee of $18 per vehicle to access the trails (2019-2020 prices), and considering the state they are in I think it’s very reasonable. Trails are normally open from late November until late March.

If you go, be prepared for winter conditions. Take warm clothing, hot drinks and extra food and make sure you’ve got a shovel in your car.

Where to stay in and near Algonquin Park in winter

If you’re super keen to prolong the experience try some overnight camping in a yurt at the Mew Lake Campground. It’s open year round. The Couple’s Resort, a five star resort, just outside the eastern park boundaries is another lodging possibility.

I was very impressed with the cross country skiing in Algonquin Park. John and I certainly felt like we’d had an outstanding day on the trails.

Further reading on things to do in winter in Ontario 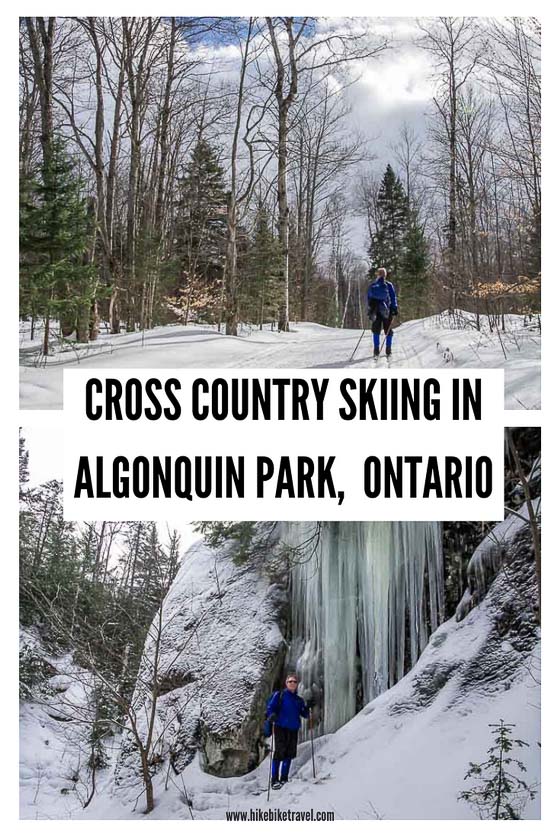