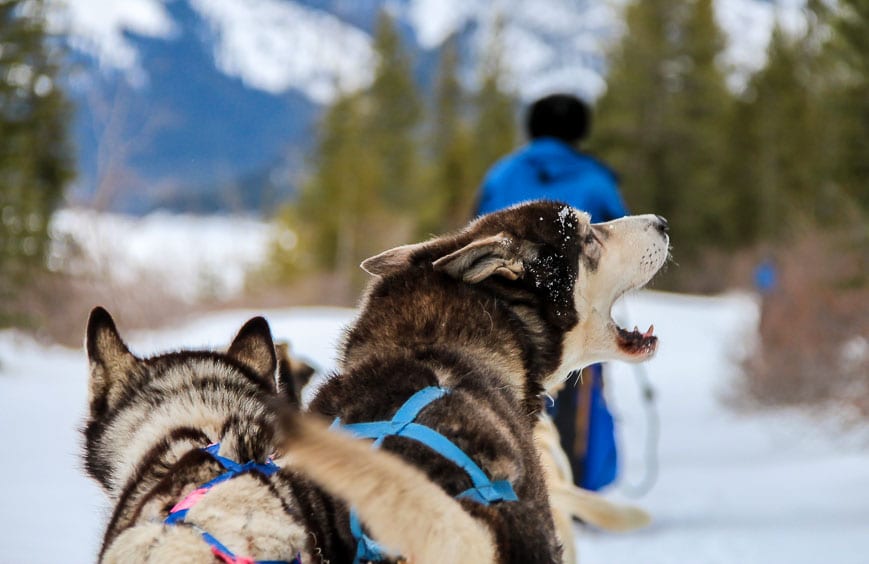 Is dog sledding in Canmore on your bucket list? If it isn’t, it should be. It’s so much fun – whether you’re snuggled up with your significant other or you’re actually on the back of the sled mushing the dogs. On the downhills it can be a real thrill – the faster you go the more exciting it gets. You’ll also find the enthusiasm of the dogs to be contagious.

If you’re suffering from the winter blahs or you’re just looking for a fun winter tour, dog sledding in Canmore checks off all the boxes.  We did it with Howling Dog Tours one January afternoon  – and found it to be a fantastic way to spend time outdoors – especially when with the Rockies as a backdrop.

Dog sledding had been on my bucket list for quite some time. I always associate dog sledding with the far north – thinking of the Iditarod and Yukon Quest races.

But dog sledding is gaining in popularity – because almost everyone can do it and  and it’s such a fun way to spend some time outside. In Canmore alone, there are three dog sledding companies.

Howling Dog Tours is the company we chose to go with. They’ve been around for more than 15 years and now have a kennel with close to 200 dogs.

They are typically a cross between a Siberian Husky and either a greyhound or setter type dog. That surprised me. I expected to see all Alaskan Husky dogs. Seven of their dogs have competed in 1,000 mile plus races, including Gizmo, one of the dogs that pulled our sled.

Typically there are seven dogs pulling one sled with two adults and up to two kids depending on weight. If the track is fast and icy then only six dogs are used and if it’s slow and mushy then eight dogs are put to work.

These dogs love to run. That’s not to say that the guides (mushers) don’t try to give them a break on the hills by hopping off and running beside the sled – an exhausting activity I might add.

How long is a dog sledding tour?

The tour we were on was two hours in length – plus a very scenic narrated drive of half an hour on either end to get up to the Spray Lakes from Canmore.

Typically the company runs four tours a day – at 10 AM, noon, 2 PM and 4 PM. The dogs run twice a day and have a rest in between. In any given week the dogs may run on three to five days.

The actual tour starts with harnessing the dogs and if you’re interested, you can help. Then each dog is put on the line while one person sits in the sled – to prevent it from taking off – and another holds the line. In a matter of minutes you’re ready to go.

Initially we both sat in the sled, covered with blankets. It’s a real thrill when you first take off. That’s followed by pure enjoyment of being outside in nature with the wind in your face and the enthusiasm shown by the dogs.

I tried my luck on the back of the sled after our hot chocolate-cookie stop. Great fun and where I’d like to spend more time. I have a new appreciation for the shape that dogsled racers must be in.

About 20 minutes into the ride, John decided it was time to hop on the back of the sled. That’s where the real fun and the hard work lies.

On the hills you typically try and help the dogs by jumping off and pushing the sled and then quickly hopping onto the runner before you take off flying again. Exciting to say the least on the downhill or on a curve.

At the end of the 10 kilometre loop the dogs are given a big bowl of water and chicken bits to prevent dehydration. Without the chicken bits, the dogs might not drink. Then you can show them some love and give them a biscuit.

I was surprised by many aspects of dog sledding

The size of the dogs was much smaller than I thought they’d be.

Greyhound is part of what makes up many an Alaskan Husky.

The dogs are very friendly and loved any and all human attention.

This dog sledding tour has just whetted my appetite for more. Now I’d like the real wilderness multi-day experience, camping out under the stars.

If you decide to go dog sledding in Canmore

Wear clothes in layers and make sure you have a scarf or neck warmer to protect your face from the wind.

Be prepared to smell a bit doggie by the end.

The price of Howling Dog’s two hour tour is $199 plus tax per person in high season. It’s excellent value when you consider how much goes into keeping these dogs healthy and happy – and the shear number of bodies needed to run a dog sledding company.

If you’re visiting in the Calgary – Banff corridor or if you’ve got a case of the winter blahs and you’re up for trying something new, then I really do recommend a dog sledding tour in Canmore.

Further reading on things to do in winter in Alberta 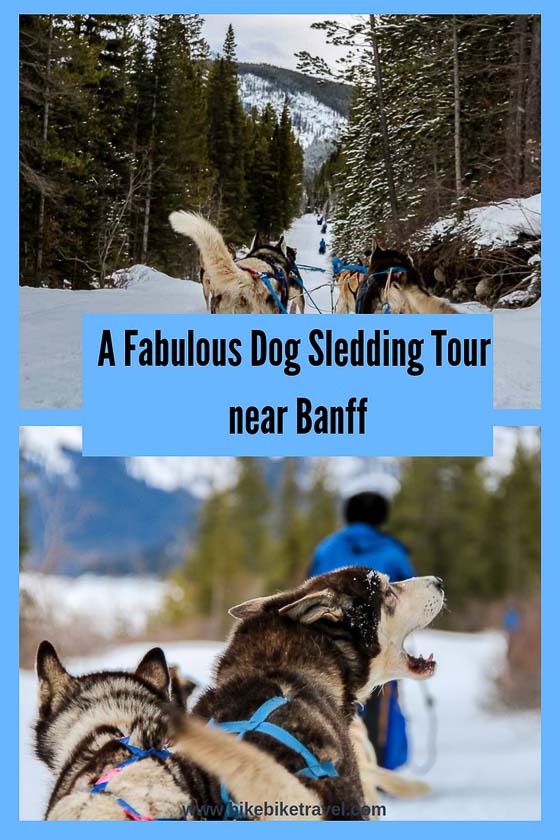