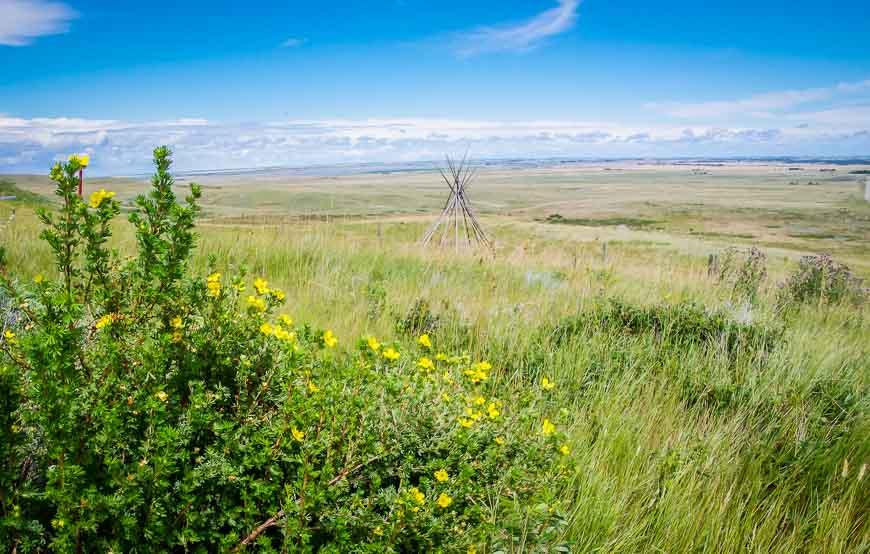 The Head-Smashed-In Buffalo Jump in southern Alberta is a UNESCO world heritage site worth visiting. My visit to the Buffalo Jump, was an illuminating journey into the life of the Plains people and the buffalo culture. This buffalo jump is one of the world’s oldest – and best preserved jumps.

The name Head-Smashed-In Buffalo Jump traces its origins to a legend about a foolish young brave. He wanted to watch the herded buffalo come flying over from the shelter of a ledge below the sandstone cliffs. Unfortunately for him it was a particularly successful hunt and the buffalo began piling up.

Eventually the brave became trapped between the animals and the cliffs. His people found him with his skull crushed by the weight of the buffalo carcasses – and hence the name.

Updated January 2022. This post includes some affiliate links. If you make a purchase via one of these links, I may receive a small commission at no extra cost to you. Thank you for your support.

The site of the buffalo jump may be underwhelming to some. However, the story is anything but – and the Interpretative Center is a five story architectural gem built into a hillside. Designed by Robert LeBlond, it showcases the life of the Plains people and their reliance on the buffalo.

6,000 years of buffalo jumping at Head-Smashed-In

There is evidence that humans were active in this area 11,000 years ago and archaeological evidence points to nearly 6,000 years of buffalo jumping. The Plains people intimately understood buffalo behavior and the local topography. They used this information to successfully herd the buffalo over the cliffs.

The actual day of a buffalo hunt likely occurred in the fall after the animals had fattened up over the summer. A great deal of preparation preceded the hunt.

Large stones were positioned to mark the drive lanes. Branches were put into these stone cairns as a way to focus the buffalo. Then a few native hunters were chosen to wear wolf or coyote skins and would then herd the buffalo.

Another hunter would dress in buffalo skins. His job was to fool the buffalo into thinking he was a calf. He would work his way forward towards the cliff, while at the same time the wolf and coyote skin wearing natives would slowly edge closer to the herd.

The cairns and branches kept the buffalo in the drive zone which narrowed towards the cliff. Eventually the calf would run in the direction of the cliff and at the same time a huge number of natives would jump up alongside the drive zone and start waving buffalo skins.

The confusion set the herd to stampeding with the buffalo dressed native in front leading the way. He would duck out of the drive zone at the last second and by then the momentum of the herd was so great that they literally flew over the cliffs to their deaths.

The fall wasn’t that great – between 15-30 feet. If they didn’t die flying off the cliff then they would be clubbed by natives waiting at the bottom or be squashed by 1,000 pound bodies building up on top.

The Interpretative Centre does an excellent job showcasing native life on the plains. Displays of tools, foods, clothing and shelter are skillfully done. If you take the time to watch the 15 minute movie, you’ll be well able to imagine the day of the hunt.

Hike the trails around the buffalo jump

Finish a visit to this unique part of the world with walks above and below the cliffs. The hike to the top of the buffalo jump is 1.4 km return. It’s easy and family-friendly.

Where is Head-Smashed-In Buffalo Jump?

Head-Smashed-In Buffalo Jump is close to the town of Fort MacLeod in southern Alberta. From Calgary take Highway 2 south for roughly 190 kilometres until you reach Highway 785, just north of Fort MacLeod.

Turn west (right if you’re driving from Calgary) and follow it for 16.5 kilometres to reach the visitor centre. There is signage on Highway 2 pointing you in the right direction.

Head-Smashed-In is open 7 days a week from 10 AM – 5 PM except for Easter Sunday, Christmas Eve, Christmas and New Year’s Day. On occasion they close if there is severe weather so check ahead of time.

For more information on Head-Smashed-In Buffalo Jump visit their website.

Where to stay near this Alberta UNESCO site

Fort MacLeod is the closest town of note. The Prairie Rose Cottage is small but rated exceptional for two people.

If you’re up for a 45 minute drive then you’ll find more accommodation options in Lethbridge. Both the Holiday Inn Express – Lethbridge Southeast and the Fairfield Inn & Suites by Marriott Lethbridge get great reviews. 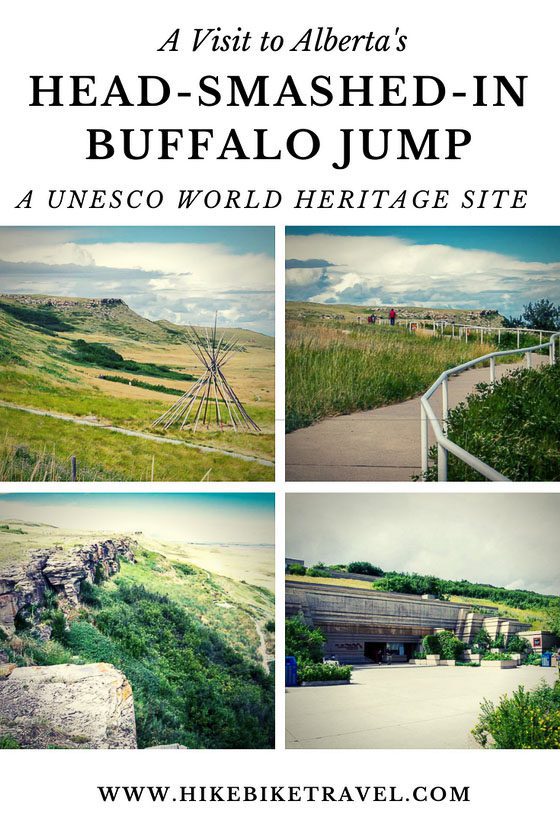