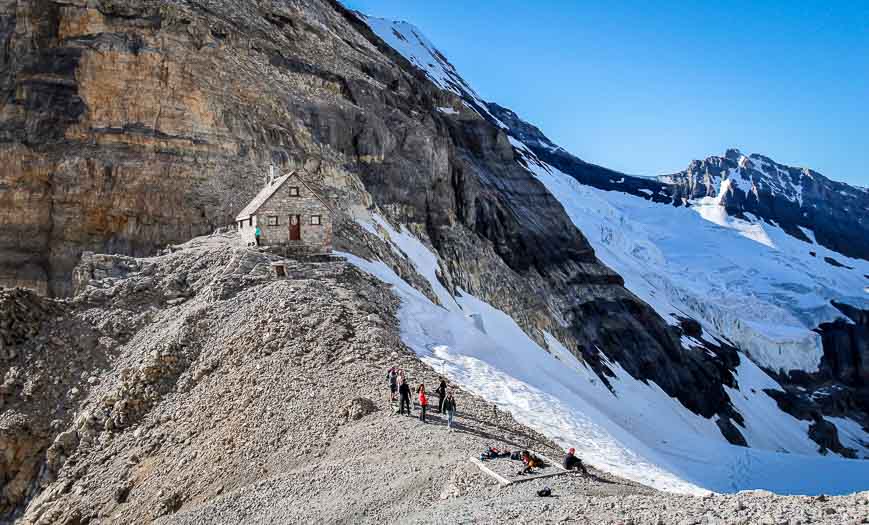 Hike to Abbott Pass Hut on the BC- AB Border

I was invited by the media group representing Travel Alberta to join a group on a two day hike to Abbott Pass Hut on the Alberta – BC border. Their goal was to produce a three to four minute video of the journey for the Travel Alberta website for release later in the fall. Part of the hike to Abbott Pass is a serious scree climb and the hut is precariously through beautifully situated.

Please note: The Abbott Pass Hut is permanently closed as of 2022 – and in fact the hut was taken down for safety reasons in July 2022. Apparently there was more slope erosion than originally thought and some cracks in the masonry. An end of an era.

Our group consisted of four hikers, three mountain guides and ten others – including crew, client and agency people.

In our hiking group – talent is what we were called – none of us had been in anything but a home video before. We had to agree before going that we would cooperate at all times with photos, videos and interviews. Sure – no problem I figured. And fortunately, the on camera sessions got easier over the course of the two days.

When you see a picture of Abbott Pass Hut you might ask yourself why in God’s name anyone would want to hike there.

Hike to Abbott Pass Hut for the challenge

I love the mountains. I revel in their beauty and delight in the solitude. That’s not to say that I’m not intimidated at times and in fact occasionally terrified on a talus slope when the boulders underneath you start to move. Trust me, I am.

But with the security of a mountain guide and their expertise with route finding, I had no problem agreeing to go.

Out of the four hikers, I was the oldest by far. In fact I could have been their mother. What I had going for me was experience and I figured I was in shape enough to make it up the close to 3,000 feet of vertical with a pack on my back.

And as it turned out there were many in the group of ten who had never done anything like this before. In fact our guide Tamara said that she thinks it was probably the first time Abbott Pass Hut had anyone walk through the door in jeans. (Thank heavens the weather cooperated because not all were dressed appropriately!)

Over the course of about an hour you make your way up on a wide trail from the incredibly hued Lake O’Hara to the equally gorgeous Lake Oesa.

Time to get serious

Above Lake Oesa it’s time to don helmets and get serious. Initially the scree slopes are easy to cross; it’s the final 2,000 feet of climbing that gets gnarly.

Once you get into the section of unstable boulders you need to focus on every footstep. You don’t want to get a leg or a hand caught under a boulder. And you certainly don’t want to dislodge one and send it bouncing down the mountain.

The only part of the climb I really disliked was the middle section. Through here the boulders were larger and more mobile. At times it felt like you were on a sliding mountain. Whenever a boulder started to go my adrenaline surged. One step at a time was my mantra.

As we got close to the top the grade seemed to steepen even more – but solid outcrop appeared so you felt a sense of safety grabbing onto it.

The backside of the saddle that takes you down to Lake Louise is called The Death Trap. One of the guides said he’d done it once before and never again. Ice randomly breaks off from the glacier plus there are numerous crevasses to traverse.

Would I do it again?? Maybe – but there are so many great hikes in the Rockies I’d like to do, that I think for now I’d rather explore new country.

Tips for the hike to Abbott Pass

The hike to Abbott Pass Hut is a serious one. Accidents happen regularly on the scree slopes and people have been killed. Follow these tips for a safe hike.

Further reading on easier hikes in BC and Alberta 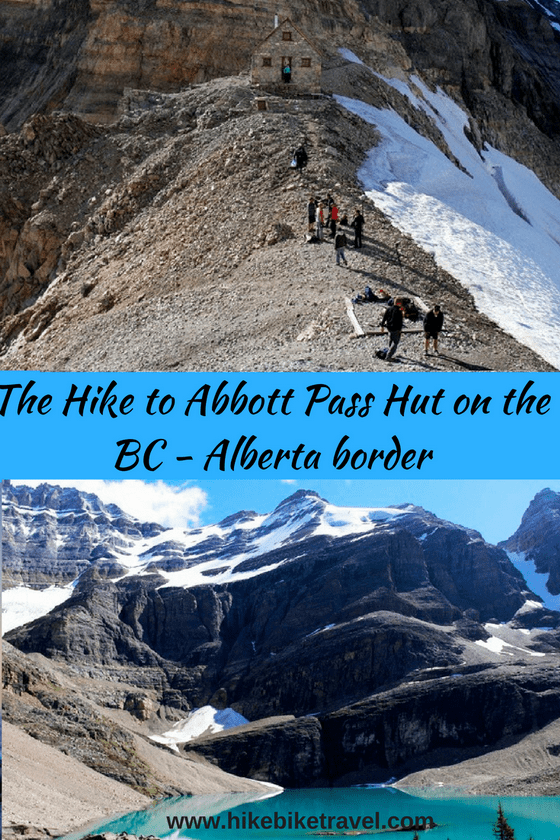