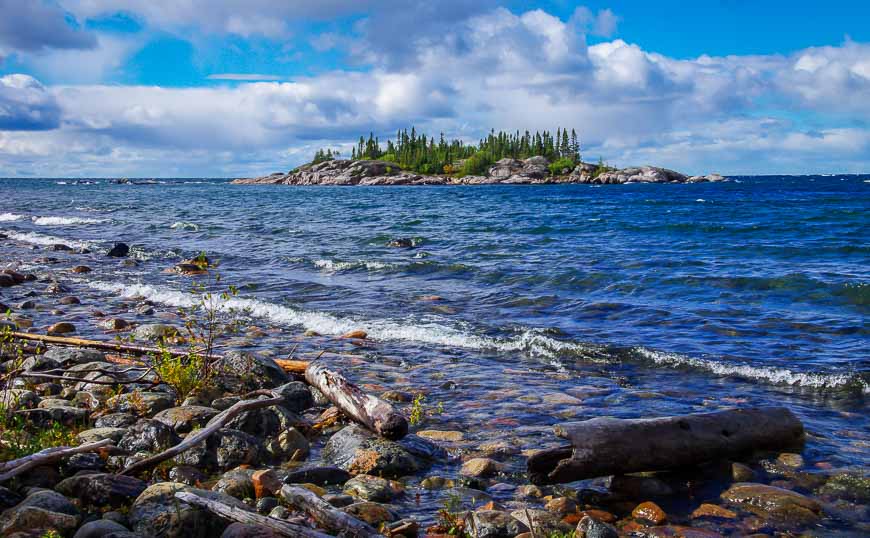 If you’ve been following my adventures hiking in Pukaskwa National Park you would know that it had been a tough hike so far on the Coastal Trail. Fortunately on the fourth day we were able to make some serious progress.

Our plan for this day was to hike the Coastal Trail from Oiseau Bay to Willow River, a distance of 14.1 km. We got started at 9 AM but didn’t roll into camp until 6:40 PM. Still we were thrilled to have made it.

The hike to Fish Harbour

The Coastal trail on day 4 was a delightful mix of woods and shoreline. The highlight had to be the section leading towards Fish Harbour that takes you through a cleft in the rocks and deposits you on the Lake Superior shoreline. Here you have to scale a small cliff – which for us was no problem but it required a big lift up for the dog.

The next two photos show off the superb scenery on our way to Fish Harbour – just after we had scaled the cliff.

Morrison Harbour is in bear country

After lunch it was more woods walking until we reached Morrison Harbour. We had made reservations to stay at Morrison Harbour – for the night before no less – but in hindsight I’m glad we didn’t end up camping here.

It’s smack dab in the middle of bear country – and the one area where you are warned at the orientation session to be on the lookout for bears.

We had seen countless piles of bear scat before arriving at Morrison Harbour. I have never seen blueberries in such abundance as I did through here so it makes perfect sense that the bears love the area.

The woods were often filled with moss like the one below. They were thick and dark too.

By late in the afternoon we were all bagged and starting to wonder when the bloody trail would ever come to an end. It seemed we were on a never ending obstacle course – lichen covered, ankle twisting lake bottom rocks, beaver dams, cobbles, slippery rocks along the shore – even rotting logs.

But the beauty of the place made up for it all. Really it did.

The last part of the walk to the Willow Creek campground

The last section of trail was a few kilometres of easy walking through the woods. Somehow I had missed the sign and trail that offers you an option to hike a longer coastal route on route to the Willow Creek campground.

So when we came to a trail intersection and I relayed where I thought we were to my friends, I instantly felt their spirits sag. Another kilometre and a half to go is what we thought – and it was 6:30 PM already.

In just a few minutes I realized I was wrong. I’d been thinking we might be further ahead than we were – just because of the length of time that had elapsed and the sense that something wasn’t fitting with the map.

When I saw the Willow River suspension bridge I almost collapsed to the ground to give thanks. From there it was an easy five minute walk to the Willow River campsite – probably the prettiest one we stayed at on the whole trail.

We had our tents up in record time – and quickly threw on layers of warm clothes as it couldn’t have been more than 3 or 4°C by the time the sun went down. But with a fire going, and another good meal we ended the day feeling pretty darned pleased with ourselves.

Would you consider hiking the Coastal Trail after seeing these photos?

Further reading about hiking in Pukaskwa 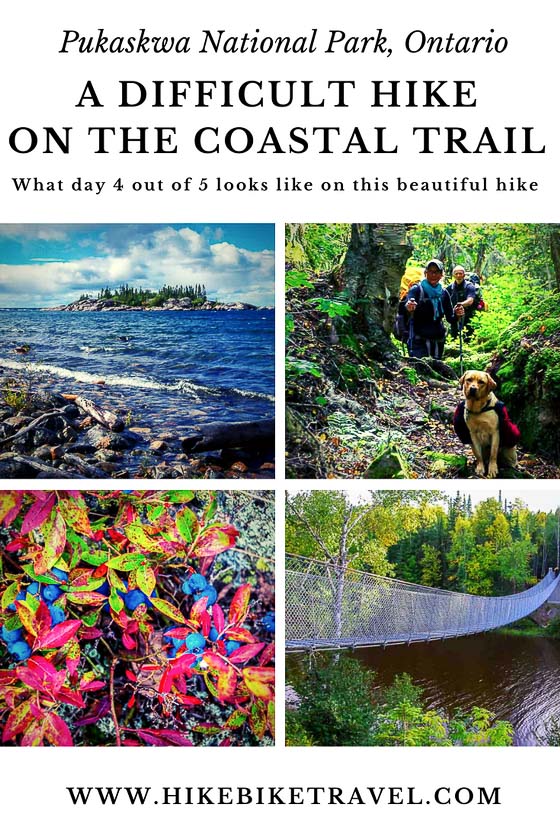