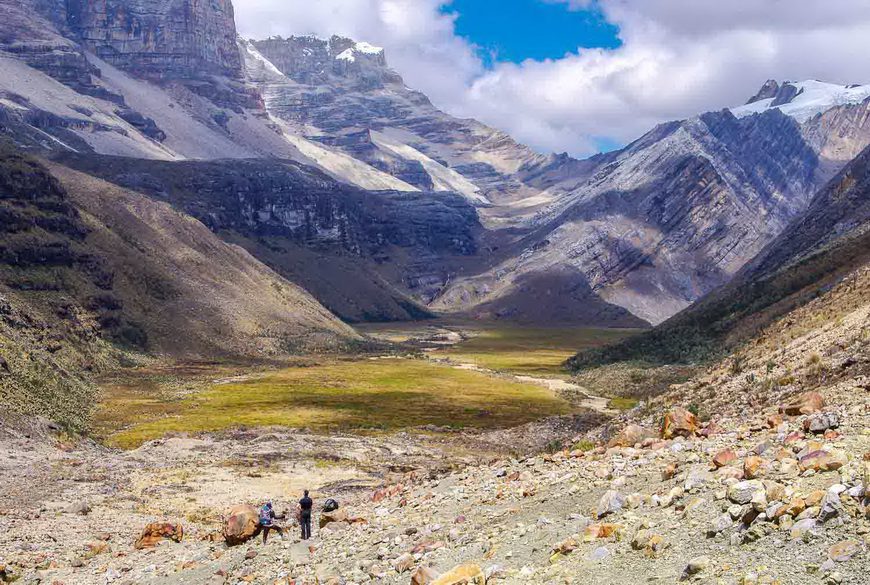 I’m just back from hiking in the Sierra Nevada del Cocuy range of mountains in eastern Colombia. I don’t think hiking in high mountains is the first thing that comes to mind when people think of Colombia.

It certainly wasn’t what John and I originally planned to do when we bought our airline tickets. But after considerable research a six day trek looked like a great way to see this little known part of the country.

Back in 1988 when the Lonely Planet published its first guide book on Colombia, the El Cocuy mountain range was identified by Christophe Didinsky as being the most beautiful in all of the South American Andes. I’d already trekked through the Cordillera Blanca in Peru – and thought them to be spectacular – so I was intrigued by what we might see.

It turns out – at least according to one of our porters – that only about 500 people per year do the six day circuit. Those numbers are starting to climb as more and more people hear about the hike.

John and I spent six days in total hiking the Sierra Nevada circuit starting in the small town of Guican – accessed via a horrific 14 hour bus ride from Bogota. Fortunately that was the only nasty part of the trip.

The hike itself was difficult. On average we hiked about six hours a day – not excessive by any standards. But this hike is at altitude. Guican is the low point of the hike – sitting at 2,750 metres (9022 feet).

The high point is Boqueron de la Sierra Pass at 4,650 metres (15,256 feet). But the real issue is that you’re sleeping at an altitude of between 4,000 and 4,350 metres for five nights. We took Diamox to mitigate the effects of altitude since we didn’t have a lot of time to acclimatize.

Also its cold the minute the sun goes down so there’s a lot of tent time involved. And the weather is unpredictable. We were lucky. It rained for 20 minutes at the end of the first day, just as we approached the hostel we were to sleep in that night. We had chilling fogs on a few occasions too but our luck overall with the weather was excellent.

We compared our experience to that of two Canadians we met at the top of the first pass on the second day. They had woken to snow on three occasions and the only clear day with a view was on the day we met them. How disappointing not to see these mountains in all their glory!

In total we climbed and descended six passes. Generally the trails were in excellent shape and the only tough section I found was climbing through an extra large boulder field – the ones where you step on a boulder, it moves – and a limb gets stuck.

Nothing untoward happened to either John or I except for one blister apiece. That’s not to say I wasn’t gasping for air like a fish out of water on every pass we climbed. I was but after a short rest I’d be good to go again.

We had hired a guide – Rodrigo who runs Colombia Treks. I’d found him on an online forum and had got a reference from an American who had done our proposed trip. Still I wasn’t entirely sure how it would all work out until we got there. It turned out to be just fine.

Rodrigo is a knowledgeable mountain guide and he speaks English which was a bonus for me. We also hired an extra porter so we didn’t have to lug our full packs on two of the days. That was worth every penny.

Rodrigo and one of the porters also acted as cooks – and that along with the fact they put up our tent for us were really the only luxuries we enjoyed on the trip.

If you think you’d like to go to this region, plan to hike during Colombia’s summer season. In winter the weather is even more unpredictable.

For a full account of our fabulous 6 day trek in the Cordillera Blanca read my day by day post.

Have you ever been hiking in the Sierra Nevada range in Colombia? Would you want to go?