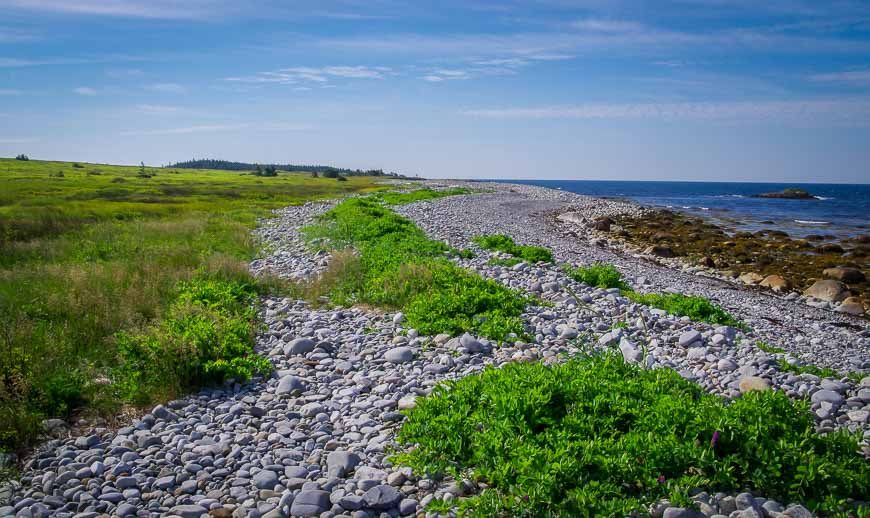 Tough walking on this cobbled section of beach

Much of the hiking in Kejimkujik National Park Seaside is superb. I loved the desolate beauty of the place – wild flowers galore including the orchids pictured below that I’d never seen before, rocky beaches, stunted trees and spectacular ocean vistas.

What I didn’t love was locking eyes, not once but twice with a black bear before I bolted. I’d been looking out at a wave breaking over a rock in a beautiful section of Kejimkujik National Park Seaside. It was a peaceful and Zen-like coastal scene with nary a soul around. I could have stopped and watched the waves breaking for hours.

I was all alone. It was about ten in the morning and there wasn’t another car in the Kejimkujik parking lot when I pulled in. I in fact had congratulated myself of having the place to myself.

I had planned to hike about a kilometre out to the start of the 5.5 km loop hike around Port Joli Head, do it and then call it a day. I was about 80% done with the loop – making good time even with lots of photo stops.

I should have known something was up. I saw bear scat – fresh too – but mistook it for a dog and figured someone had walked rather then driven in with their dog to hike the trail, perhaps from nearby Thomas Raddall Provincial Park.

The scat didn’t have any berries in it – as it wasn’t berry season – and looked pretty darn pebbly if you want to inspect the picture. The scat should have been obvious clue #1.

After admiring the waves crashing on the shore, I turned around to read the blurb about the shepherd’s ruins. It wasn’t until I got my camera out to take a picture of the ocean that I noticed not only a big, beautiful black bear – but her two cubs. And no I don’t have any proof – just the memory of my thumping heart.

There was a section of boardwalk I hiked before I got to the shelter – and I thought it was rather strange that all the ferns coming out through the cracks were torn and beaten up. I actually made some noise through here – just in case. Well duh.

If I’d put two and two together I would have known I was about 15 minutes behind the bears. Sometimes ignorance is bliss – and I continued to snap pictures of the pretty scenes below.

Once I’d seen the bears from the ruins of the shepherd shelter I started to back away. In fact I ducked behind the shelter to see if I could get a quick shot of the bear. But mama was still staring at me. That’s when I decided I was out of there and there was no time for a picture.

You’re not supposed to let a bear see you running – and I didn’t but as soon as I turned the corner and was hidden from view I ran with everything I had in me.

I put many kilometres between she and I before I slowed down to a normal walking pace. For the first 15-20 minutes I glanced back every few seconds. I also picked up a few pieces of driftwood to make myself look larger.

Since I’m writing this blog I obviously didn’t have any ongoing bear issues. In fact, I ran into four people on the return and warned them. At that point I had some peace of mind because they were now between the bear and I – unless she completed the loop and started back in my direction.

The bottom line is that the hiking in Kejimkujik National Park Seaside is sublime, but some bear spray is in order.

There is also the 5.2 km Harbour Rocks Trail. It’s an out and back hike.

No matter what hike you do, you can knock it off in a half day.

The best time to hike is between May and October. 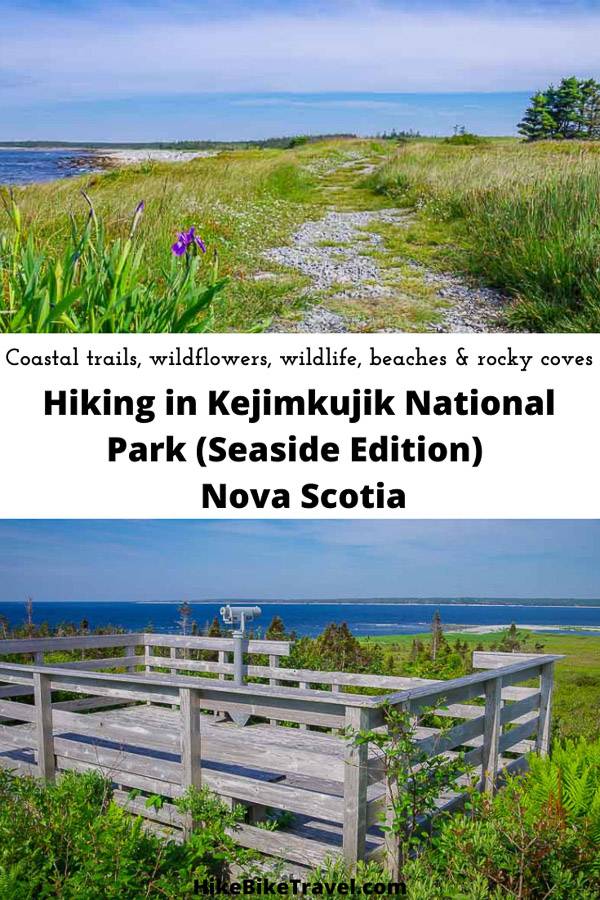