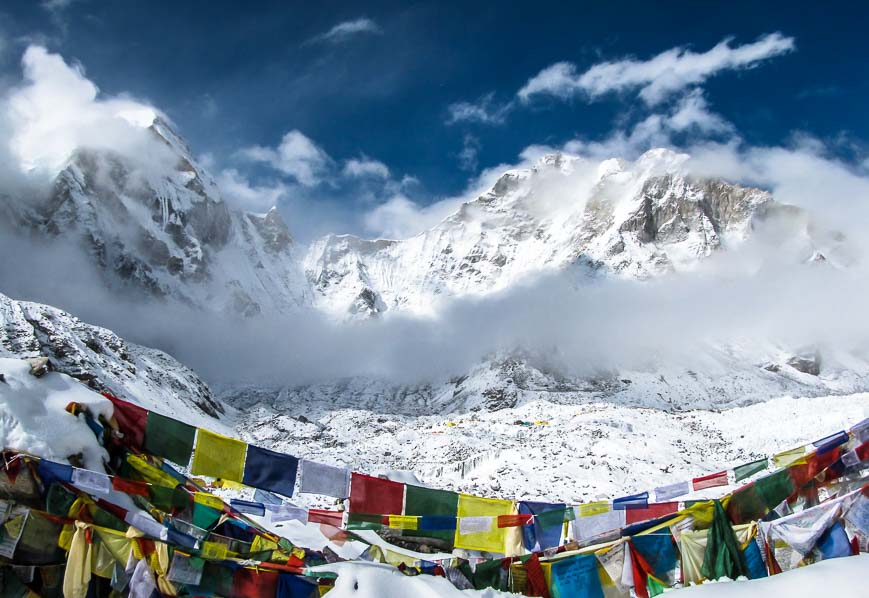 This is a guest post written by my daughter, Kristen McAdam – an adventurous soul with her mother’s wanderlust. At least her cubicle is more interesting than most! She describes 8 reasons for doing the Mt Everest basecamp trek.

You can always find reasons for not doing the Mt Everest basecamp trek but if it’s been on your bucket list, carve out a chunk of time while you can still hike five to seven hours in a day and endure some privation to do it. It’s one of those treks you’ll never regret doing.

A month in Nepal

Back in February I made the decision to ask my boss for an entire month off to travel to Nepal. I was feeling the familiar tug of the travel bug and was eager to tick off another item on my ever-growing bucket list.

I’ve wanted to visit Mt. Everest base camp since I first learned of it when I was eight years old. I had actually planned a trip a few years ago (paid the deposit and everything) but life sent me on a different path and I ended up walking the Camino de Santiago instead.

So when one of my best friends told me she was going to Nepal for several months, I decided this was the perfect opportunity to make it happen. I work in professional sports so my life revolves around the NHL and NBA seasons. I knew my time off had to coincide with their breaks so I pitched my boss with that angle in mind.

Luckily she signed off and a few months later I was off on three planes and travelling over 40 hours to Kathmandu. As one of the best experiences of my life, I wanted to capture the top reasons to make the trip.

8 Reasons to make the trek to Mt. Everest Base Camp

#1 – Leave the office for an entire month.

Nothing rejuvenates the soul and clears the mind like a month of adventure!

#2 – Meet people from around the world

I booked my trip with G Adventures and loved it. I would highly recommend booking with them. I had people on my trip from all over the world: Canada, the U.S., Wales, Switzerland, Mongolia, India, and of course our amazing porters from Nepal.

On the day that we finally reached base camp, I met a man who had summited Everest only two weeks prior. I was in awe of his accomplishment and spent a few minutes hearing about his experience.

His wife had also reached the top the day before so he was heading back to Namche Bazaar (the only town between the airport and the mountain) to inform their family and friends of the good news.

After my trek was over I met another group who had also just finished. Not all of them made it. One of the gentlemen got within about 20 minutes of the summit when he ran out of oxygen and was forced to turn around.

Can you imagine? The thing that stood out from both of their experiences was that the bodies of past climbers who didn’t survive are now used as trail markers.

#4 – Wake up, step outside your door and be surrounded by the most amazing scenery you’ve ever imagined

Every morning was absolutely incredible but I remember waking up in Namche Bazaar the best. There had been cloud cover during the first few days on the trek so we hadn’t had the opportunity to see the mountain peaks.

In the early morning hours in Namche Bazaar, I stepped outside while everyone was still sleeping to the most incredible view in front of me. High above the clouds, the mountaintops rose into the sky. With the light of the morning striking the steep faces it was the most incredible sight.

With the calm and quiet of the morning melded with the beauty of the Himalayas, I remember feeling the most incredible gratitude for that moment.

The runway at Lukla Airport in the depths of the Himalayas is a short slab of concrete on the edge of a 2,000 foot cliff. To land the pilot has to execute with precision so as not to miss the runway and crash into the cliff or land so far up the runway that the plane doesn’t have enough time to stop before the barrier.

Taking off is a different can of worms. If the plane doesn’t gather enough speed, it will fall off the cliff at the end of the runway. The runway is also on an incline of about 12 degrees so you land going uphill and take off going downhill. It makes for a memorable (and frightening) experience!

I have the utmost respect for the people of Nepal that spend their lives moving goods through the treacherous mountain terrain. We saw them carrying everything under the sun but the most memorable item was the huge beams of wood.

The porters must each have had 10 or so two by fours. And some of them were doing it in sandals that were so torn apart it was like they were walking in bare feet. I wish I could have tipped every single one of those men I met.

The monastery itself is beautiful. It sits at the top of a hill about 800 feet up from the river below. It is painted in bright bold colours and the surrounding peaks add to its allure.

The monks in the Thyangboche Monastery are kind enough to let trekkers in to view a prayer session. Visitors are required to cover up their arms and legs and remove their shoes. Pictures are allowed without the flash.

Each of the monks is dressed in a red thick shawl and sits hunched over on one of the lines of benches. There is a thick incense in the air. Each session is several hours long though our group only stayed for about the first hour and a half. This was definitely one of the highlights of the tour and I was humbled to have been given such a rare glimpse into this life.

If you are a foodie then the Mt. Everest base camp trek is not for you! The menu is exactly the same at every place you go: fried rice, momos (Nepalese dumplings), oatmeal, and a few other options.

It all sounds okay at first but after two weeks of the same thing, your palette begins to crave more. In a few places you can buy apples (for about $5 each) for a little variety, but all in all, the trek will make you appreciate your variety of options back home.

As I said, this trek to Nepal stands out as one of the best adventures I’ve ever had. If you are experiencing wanderlust and are looking for the trip of your life, you won’t regret a visit to Nepal!

Further reading about hiking adventures around the world