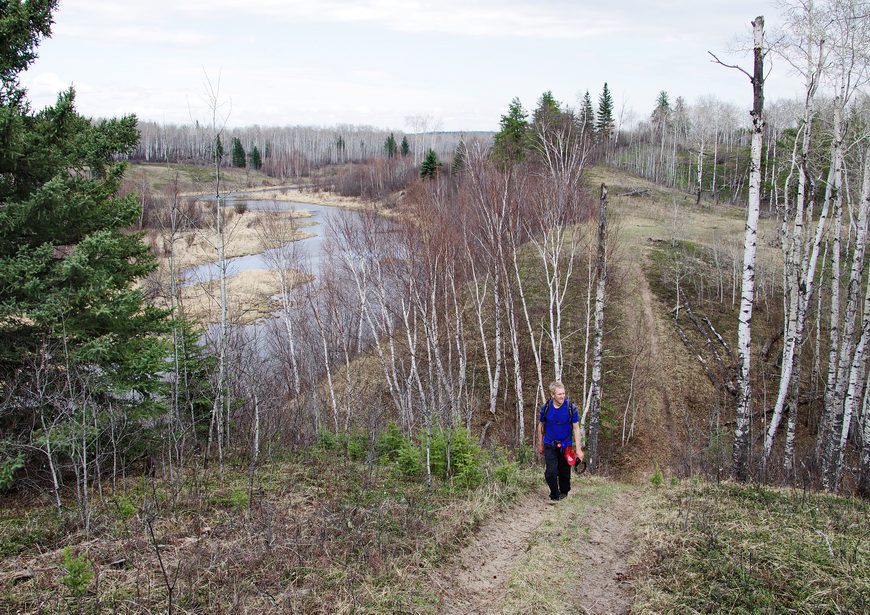 The Mustus Peitahigan hike in Saskatchewan’s Meadow Lake Provincial Park had not been in our plans for the May long weekend. John and I were in the park for the specific purpose of hiking the Boreal Trail.

The day before we had hiked a beautiful 16 km section of the trail located at the western end of the park. On the second day we planned to explore the far eastern end of the trail and then do an up and back hike from the road to campsite BT9. But we hadn’t checked the Boreal Trail website before we left – and it wasn’t until we were on the trail that we learned a section was impassable.

Find the trailhead and to do that you really need a topographical map. I suggest you visit the Boreal Trail website before you show up.

We started off on the Nature Trail which is actually part of the Boreal Trail – though it’s not signed as such. Parking is at the side of the road.

A few hundred metres into the trail, we came across a bigger sign describing the Newbranch Hiking Trail along with the 11 km Mustus Peitahigan Loop.

That sign didn’t even mention the Boreal Trail OR the fact that between campsites BT8 and BT9 there’s a giant beaver dam – that renders that section of the trail impassable – at least when we did it.

That information is on the website if I’d looked in advance, but it would be advisable to let people know on the trail as well.

The Nature Trail lived up to its name

John and I set off on the trail and in very short order heard some howling, probably within about 10 minutes of seeing the trail sign. On a first pass it sounded like a dog caught in a trap, though that made no sense to us.

As we got closer, the noise intensified. John suggested I stay on the trail while he went to investigate. No, was my immediate response. I would be joining him – along with our dog that I kept on a short leash.

Less than 100 metres from the trail, we came across a fresh deer kill – with the intestines in a nice pile and lots of fur and hair around.

Then, just off in the bush, perhaps 50 m away, we caught sight of what I think was a wolf because of its size. Needless to say we made a hasty retreat at that point – but so did it. As wolves often travel in packs, I didn’t stop looking behind me for the next hour of hiking.

(As a side note, John was not bothered by the wolf at all. That’s probably because many years ago, he was by himself on a long traverse up in the Northwest Territories. For the better part of a day, he was partially circled and followed by a pack of wolves – though they never made any aggressive moves.)

It was an easy 3 km of hiking after our wolf sighting to reach the beautifully situated BT8 campsite. In the summer a refreshing swim would be a lovely way to finish the day here.

From BT8 to BT9 it’s 6.4 km (and then a final 11.6 km to reach the eastern end of the Boreal Trail) but most of that distance is after the beaver dam. I didn’t take a picture of it but be assured it would be a very tricky, dangerous crossing with a fully loaded pack (and even without one) to get across the river.

Fortunately, there is the option to hike the rest of the Mustus Peitahigan loop. You can make that decision at the intersection with the short spur trail to the beaver dam.

The rest of the loop is a delight.

Hike up and down eskers, through the woods to eventually reach Peitahigan Lake. Look for a giant osprey nest. We saw chicks moving in it as we hiked by.

One reader tells me that when he went swimming in the lake, a number of curious loons came very close to him to check him out.

From Peithigan Lake, it took us less than an hour to reach the trailhead. Despite the fact that we only hiked about 3 kilometres on the Boreal Trail per se, both John and I were really very happy with the day.

The Mustus Peithigan hike is a great option for a moderate outing in the park. It’s only 11 kilometres long in total so with lots of breaks – including a stop at a beach and some swimming possible, kids should be able to do it.

You can reserve a campsite in Meadow Lake Provincial Park. 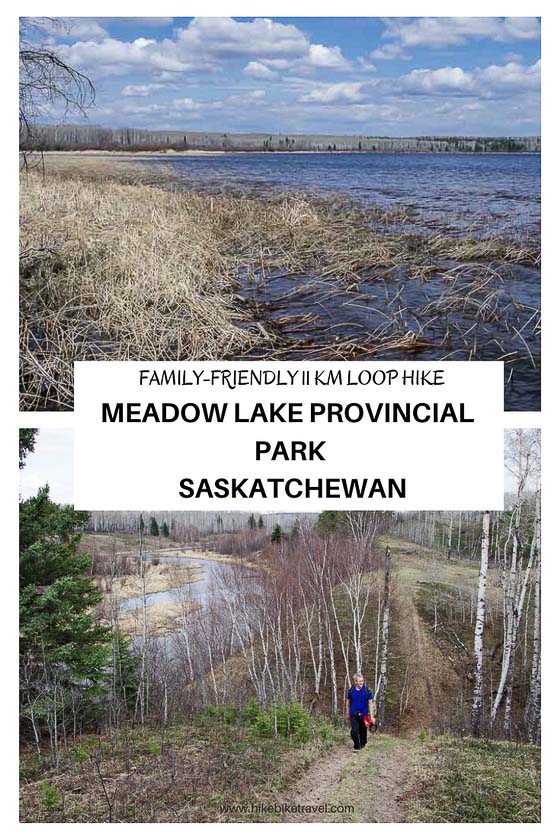