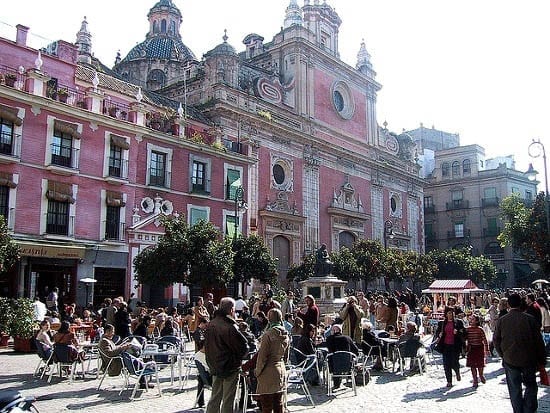 My daughter, Kristen, is in Spain walking the 1,000 kilometre Camino de la Plata which begins in Seville in the south and heads north then northwest to finish in Santiago. Every week for about 6 weeks I will post her updates on hiking this trail. In an email to me she says that you absolutely need a hiking guide – and even then you can expect some challenging route finding.

If you had told me 6 weeks ago that I would be walking my way through Spain today, I probably would have laughed out loud. But after 3 years of living in Toronto and working for Maple Leaf Sports and Entertainment, I abruptly decided it was time to move on. I love Toronto but I am an outdoorsy girl and the lack of wilderness finally got to me.

When I am finished travelling in Europe at the end of July, I will return to Toronto to move my things back out to the West Coast, but for now I am living the good life as a nomad. I heard about the Via de la Plata when I walked the Camino Frances in 2007. At the time I did not think twice about it as I did not anticipate returning to Spain but here I am, 4 years later, sitting in an internet cafe in Caceres, Spain, having just walked 13 days of the Via de la Plata.

Sevilla is an absolutely beautiful city. I spent a full day here investigating the part of the city near the cathedral. Taxis aren´t allowed into the streets by the cathedral so my cabbie dropped me off and immediately I was lost. Fortunately I stumbled upon Hotel Simon where I was able to purchase my Credencial (a passport to prove your pilgrimage) and the nice receptionist provided me with a map to my hostel.

As far as the route from Sevilla to Guillena – there is nothing really worth mentioning. Most of the day winds through the industrial area outside Sevilla and then onto a camino de tierra (dirt path) that seems to go on forever until you finally reach the small town of Guillena.

It would appear I didn´t work my new boots in as much as I should have as upon taking my boots off I discovered I already had 4 blisters – awesome. I stayed in what seemed like a new albergue for a mere 5 Euros that evening.

I got off with an early start because the other pilgrims were rustling through their bags starting at 5:30 in the morning – groan. But with the early morning light I headed out. I lost sight of the yellow arrows (that guide you on the route) within about 5 minutes. I saw a bridge ahead and decided to cross it and head up the road. After a good stretch on the main road I came to roundabout with a bar where I could grab some toast and a coffee for breakfast. I found the yellow arrows here and for the rest of the day I followed the path through pretty countryside. I made it to Castilblanco de los Arroyos by lunchtime. It was an all white village that was quite picturesque. The albergue is right across the street from a bar where you can grab some lunch/dinner. Again only 5 Euros to spend the night. 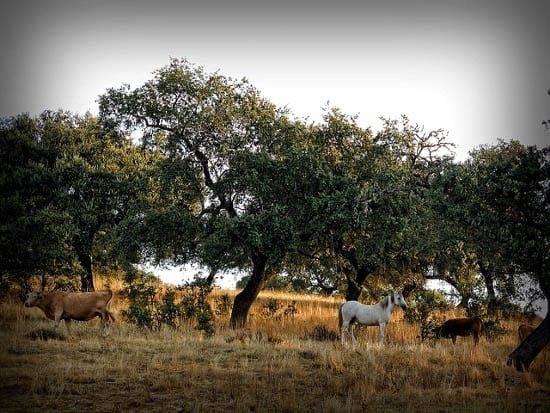 I set off early again knowing I had a long day in front of me. I crept my way through the town and upon exit I came across a cute puppy who looked like he´d never received any human love. I showered him with attention and I wish I hadn´t. He ended up following me for 2.5 hours on the main road and long story short, I witnessed him get run over by a car.

Pretty bleak day after watching something like that. Anyways, the route initially follows a road for the first 16 km of the day that just keeps winding up and up and up. Finally you turn off to the right into a¨park¨for the remainder of the day.

After about an hour of walking you will come across a stream/pond that is a perfect place to dip your feet. Near the end of the day you have to hike straight up for 1 km to a lookout point before descending just as steeply 1.5 km down the other side.

You definitely need to bring a lot of water with you on this day as there are no places to get food or water on the route. I stayed in the private albergue for only 10 Euros that evening. I had my own room and I met a very nice Dutch couple who I had dinner with at the restaurant just down the street.

This is a very nice day though it is quite hilly. You wind your way through a private estate and there are endless farm animals milling about. Very pretty and El Real de la Jara sneaks up on you before you know it.

DO NOT STAY IN THE ALBERGUE. It is by far the worst I have ever seen. Picture a damp dungeon with beds that make you think you will catch a disease by touching them. Another couple found Pension Molina which is only 10 Euros and even though I´d already paid my 8 Euros for the Albergue, I switched knowing I couldn´t sleep in that awful albergue.

Within 20 or so minutes of leaving El Real de la Jara you come across a small castle. From there half of the day takes you along a dirt road through the countryside. Then you get to a main road where there is a truck stop if you need to grab a drink or a snack.

From there it´s mostly a side road/track that leads you into Monesterio. I stayed in the Hostal Extremadura which I believe was 15 Euros for a private bedroom. The hostal is across the plaza from a restaurant which has a huge patio area where you can have a cold drink and read the afternoon away.

Today was a quiet day as I only saw one other pilgrim the entire route. The path winds through a foresty area before opening out into the plains. For the next several days the countryside is nothing but miles and miles of tall yellow grasses. Can be a bit boring so I tend to break out my iPod for these days. Stayed in an apartment this evening for only 15 Euros. Private bedroom, full kitchen, etc. It was nice but felt a little sad somehow, maybe because it was a rainy and gray sort of day. I came across an American couple from Phoenix in the restaurant where I had lunch and boy was it nice to have a conversation in English!

Today the route passes through a couple small towns which is nice. Towns provide you with a marker for how far you´ve come and they are also a welcome break to grab a snack or drink throughout the day.

Most of today´s walk was through an overgrown dirt road and so you feel like you are pulling cobwebs off of you all day long. Needless to say I was not a fan. But Zafra is a lovely town dubbed the Mini-Seville. I stayed in the albergue here for 10 Euros. Nothing fancy but you can spend the day roaming the town.

Information on the following weeks to come! Buen Camino!