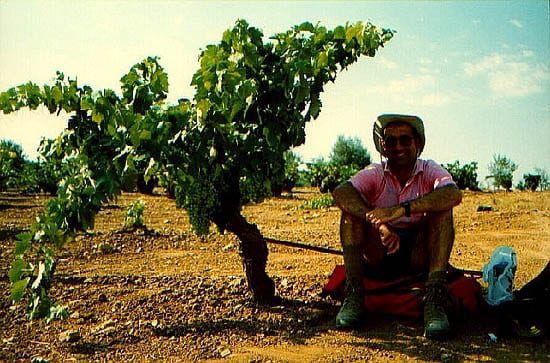 I think I´ve mentioned it before but I love it when the Camino passes through towns throughout the day. I especially like it when the first town is between 5 and 10 km from where I start in the morning – so I can grab some breakfast. This was one of those days and after a gradual climb up and then down the backside, I entered Los Santos de Maimona. You have to ask around to find the bar.

The rest of the day was an uneventful walk through the usual farmlands. About 7 kms from Villafranca you get a view of the city but for some reason these last 7 kms seem to drag on. I stayed in Casa Pelin for 18 Euros. By far the most expensive place in town but my own room, bathroom, rooftop terrace, kitchen, internet, etc were worth it!

The first 9 kms passed by very quickly but then the road seems to go in a never ending straight line for the rest of the day. There is an option to stay in Almendralejo which is 4.5 kms off the Camino part way through the day but I have not hear nice things about the town.

Torremegia is nothing special at all. It’s really just a passing through sort of place for the N630 highway. There are two albergues – I stayed in the private one for 10 Euros. I hear the other one is much nicer and the same price.

The walk into Merida is unremarkable. Most of the 16 kms is alongside the main road and then out into wide open fields before you hit the outskirts of Merida. But I was very happy to have a short day going into Merida because it’s a beautiful city with so much to see. My guidebook says that Merida holds more important remains of Roman antiquity than any other town in Spain.

I decided not to spend the 8 Euros to see the Roman amphitheatre and theatre but I peered through the gates and they are really quite something. I definitely recommend walking around the city and just gazing at the sites and architecture.

There are also a ton of outdoor patios in the main plaza which is nice for reading and people watching. I stayed in the Albergue here for 5 Euros – very average but it´s right by the river so you can stroll the parks lining the river in the evening. Very pretty.

This was the longest and hottest day to date. Leaving Merida you follow a main road for sometime, but after about 7 kms you reach the beautiful Embalse de Proserpina. It´s a reservoir with outdoor cafes and such but I was there early in the morning so nothing was open.

The Camino then steers out into the country again. A little bit of climbing and winding through some sporadic trees leads you into the sleepy town of El Carrascelejo. Nothing here. Then another 2.5 km to Aljucen where you can grab breakfast or a snack at the bar in the main square.

From there it was another 21 kms out into the middle of nowhere winding through more sporadic trees and walking on a combination of sandy and rocky paths. You need to have lots of water on this section. I ended up giving ½ of my bottle to another Pilgrim who didn´t bring enough water. Can´t stress that enough. It´s hot!!

The albergue here is in a monastery which also provides housing for the sick and poor. Dinner is made by the hospitilero and all the pilgrims eat together after a pilgrim mass conducted by the funniest priest. His laugh is fantastic. The albergue here is paid by donation of any amount you choose.

The bar across from the albergue opens early so you can grab some breakfast before heading out. Today was a nice short day which I badly needed after the long and hot day before. Nothing particular to note. Aldea de Cano is not much of a town. The albergue only has room for 7 people and there were 4 of us there. It was 5 Euros and across from the bar/restaurant. Not a nice place – lots of flies. I mean LOTS of flies.

I actually really enjoyed my evening in Aldea de Cano though because a huge thunder/lightning storm came pounding through town. I swear the lightning hit within a block from the albergue because the crack of thunder was instant. It was such an amazing thing to watch.

I woke up this morning to a light rain and the four of us staying at the albergue decided to walk on the N630 instead of the actual Camino. The path would have been incredibly muddy and we weren´t up for it. So we all walked alongside the road which was quite quiet as it was early in the morning.

About 10 kms in, there is a restaurant next to a gas station where you can grab some breakfast. Caceres is an odd place. The old town is very pretty but the city felt dead. There were not many people out and about the main square – Plaza Mayor felt like a ghost town.

There were some protesters in makeshift tents on one side of the square and tourists in the cafes on the other side. I stayed in the Pension Carretera for 20 Euros so I could have my own room. Nothing special but it´s right in Plaza Mayor. Apparently the albergue is 18 Euros anyways.

I thought this was going to be a 31 km day but it turned out to be 35 kms. Luckily my energy was running high and the weather was a bit cooler so it wasn´t so bad. After passing Casar de Caceres the camino heads out into open country again.

Lots and lots of cows roaming the expansive acres of farmland. Much later into the day the Camino turns to the left and you finally get some incredible views of the massive reservoir.

I feel weird calling it a reservoir because it is like an unbelievably beautiful lake. The stark countryside contrasts with the striking blue of the water. There is an albergue here for 15 Euros that has incredible views of the lake. Such a pretty spot.