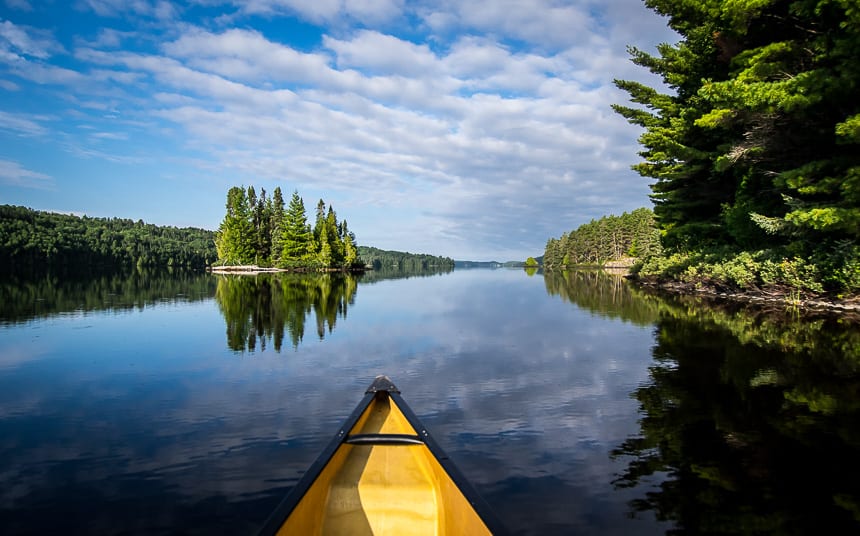 Quetico Provincial Park is an ideal destination for people who like to get truly off the beaten path and experience real wilderness. Note that in summer you can also rent cabins and drive to campsites from the highway.

John and I had a week set aside to paddle in Quetico Provincial Park. In consultation with Shane from Canoe Canada Outfitters in Atikokan we came up with a paddling route that started and ended at Beaverhouse Lake. It could easily be lengthened or shortened – depending on wind and weather.

Distance and portages: Approximately 12 km with two portages – a 1,030 m portage from the parking lot and an easy 200 m portage to get into Quetico Lake.

Time: 2.5 hours tops but we didn’t pay close attention as we were racing to beat the rain.

We got off to a slow start on our first day, largely because of the drive from Sleeping Giant Provincial Park through to Atikokan to pick up the canoe and get advice.

Throw in grocery and lunch stops as well as the final drive to the launch area and I think we finally started paddling at about 6 PM.

Beaverhouse Lake has a reputation for wind but it behaved for us as we made our way to the second portage of the trip – one of the trickier ones of the entire week.

You either have to hug the shore and line the canoe on river right or cross a small river and paddle with all your might to get to the take-out. That’s what we did but it took a couple of attempts to get in the right position. The portage itself was a snap and in minutes we were paddling again on Quetico Lake.

We had marked a number of campsites on our map so we had a good idea of where we wanted to go. The first few were full and then the sandy one pictured below seemed too buggy so we kept on paddling until we rolled into a small campsite with a great view down the lake. It too was buggy but only in the woods. It was one of those evenings where you made dinner quickly and immediately fell into bed.

Distance and portages: Approximately 23 km with two short and easy portages (120 m and 170 m) into Jean Lake but a headwind

Our day started with a giant snapping turtle sighting. John had yelled at me to come quickly but in the end there was no rush. This turtle was curious and huge – the biggest one I’ve ever seen in Canada. It spent a lot of time looking at us so we lingered at the campsite after breakfast.

We spent the day paddling down the length of Quetico Lake with one stop at a lovely campsite for lunch. We had a bit of a headwind that slowed progress but otherwise it was a great day.

Our original plan was to head for beautiful Burntside Lake via a 420 m portage out of Jean Lake but when we passed a campsite on a point in Jean Lake with a beach landing I voted to stop. It turned out to be my favourite campsite of the whole week.

Although it was cloudy most of the day it never rained and by the time we rolled into the campsite it was sunny and a perfect temperature for a swim – something I did multiple times every day.

This was a long hard day because of the length of the portages. We were really very fortunate as the wind on Sturgeon Lake – a huge lake – never presented any problems.

One of the things that slowed us down, here and later in the trip was getting over beaver dams. We’d have to step onto the dam very carefully and gently pull the canoe up and over on an angle so we wouldn’t damage it. It was my least favourite thing we had to do on the trip.

Today we met one other family at a portage and then caught sight of a canoe entering Sturgeon Lake. That was it. The islands on Sturgeon Lake very much reminded me of the Georgian Bay area with slabs of granite outcrop and windswept pines. If I’d had an extra day I would have camped on this lake.

Lonely Lake is accessed by a couple of portages. By now we were off the main route and felt very isolated though we did have frequent visits by a seemingly friendly and very large snapping turtle.

At one point it came right up to me when I was about to go swimming. I jumped and screamed. This lake had loads of loons and their calls seemed to ricochet around the lake. It was lovely.

Distance and portages: 20.5 km of paddling and 2,240 m of portaging (X 3 trips) with six portages including two that were over 700 m long

Today we woke up knowing most of the day would be spent unpacking the boat, portaging and packing up again. We had opted for a system of little lakes that would deliver us to Batchewaung Bay. A longer alternative with more paddling but fewer portages risked us getting wind-bound on big water near Pickerel Lake.

Our paddle took us from Lonely Lake to Walter Lake to Elizabeth Lake to Jesse Lake to Maria Lake and finally out to the bay. Jesse and Maria Lakes would be okay for camping – the others not so much. It was the one day we saw painted turtles but not much else.

Upon arrival at Batchewaung Bay, you can immediately tell the area has more paddlers. The first few campsites were taken as we got into the bay and the wind had picked up. All I wanted to do by this time was relax.

Fortunately we happened on a great campsite at the northwest end of the small island you first see when you enter the bay. What a relief to find it empty as the next marginal one was another portage away.

We had a beautiful, peaceful evening – the first one though without a large snapping turtle visitor.

This was a long day with all the portaging we did. Right off the bat we had four short portages through a lot of swampy terrain that was actually tough to paddle. Then we had a long stretch of paddling down McAlpine Lake, my least favourite lake of all as the shore is primarily sandy and rocky with little in the way of outcrop.

There’s a short 50 m portage to get into Kasakokwog Lake, a much nicer lake of some size. The last portage was also the longest at 950 m. It took us the better part of an hour considering you have to walk it three times, twice carrying gear.

From the end of the portage it’s a short paddle to get to a nice campsite on Cirrus Lake, just minutes from a trail to Sue Falls.

We hadn’t seen a soul all day so figured we’d visit the falls rather than setting up camp first. Halfway over to the falls we saw two couples emerge from a portage so we did an about face and hustled  back to grab the campsite. I was not keen about paddling any further and we really did want to visit the falls.

Sue Falls exceeded all expectations. They must be a magnificent sight in the spring with all the runoff but even in late summer they were beautiful. There are sections where you can get up close and enjoy a shower but in the late evening we were just happy to rock hop and explore on foot.

We were very lucky to have the calm, sunny day we did considering the distance we traveled. We got an early start and were on the water by 8 AM. (That was early for us.)

We had a long paddle down most of the length of Cirrus Lake followed by a 360 m portage to get into Quetico Lake. Cirrus Lake is lovely and worthy of a night or two.

The portage into Quetico Lake was a little trickier than some as a big tree was down. It was the only blockage we ever encountered on the trails we used.

Once into Quetico Lake our destination were the cliffs on the north side of the lake that had pictographs. We did see a few of them but the more interesting ones are further to the east and we just didn’t have the energy to add another four kilometres round trip. Still there was a quality about the area that seemed almost spiritual.

From there we still had a lot of paddling to do and we could hear thunder rumbling in the distance. We had one open section of the lake to cross and we wasted no time getting to safety. In the end the storm passed to the west of us.

Our final night was at a campsite within minutes of the portage from Quetico Lake into Beaverhouse Lake. It turned out to be a very beautiful area even though the campsite was obviously more heavily used than others.

Day 7: Beaverhouse Lake back to the boat launch

Distance and portages: About 5 km and one final portage to the parking lot

It’s always bittersweet finishing a wilderness trip. It had been a real treat to truly unplug as there is no cell service anywhere we paddled. The weather cooperated with only a few hours of showers on our first night out.

We were up early with the mist still rising from the lake. I’d had one last early morning swim as who knows when my next fresh-water swim will be.

John and I paddled on calm water back to the launch site in about an hour – again without anyone around – except at the launch site an older gentleman showed up. He was off on a three week solo paddle. He told John he’d been coming every year for 40 years, some summers twice – and all the way from Calgary.

For information on how to plan a canoe trip, visit the Quetico Provincial Park website and read this blog. Truly this is an exceptional part of Ontario to explore and one that had been on my wish list for decades. It was real treat to paddle on freshwater lakes in the Canadian Shield with no worries about bears. 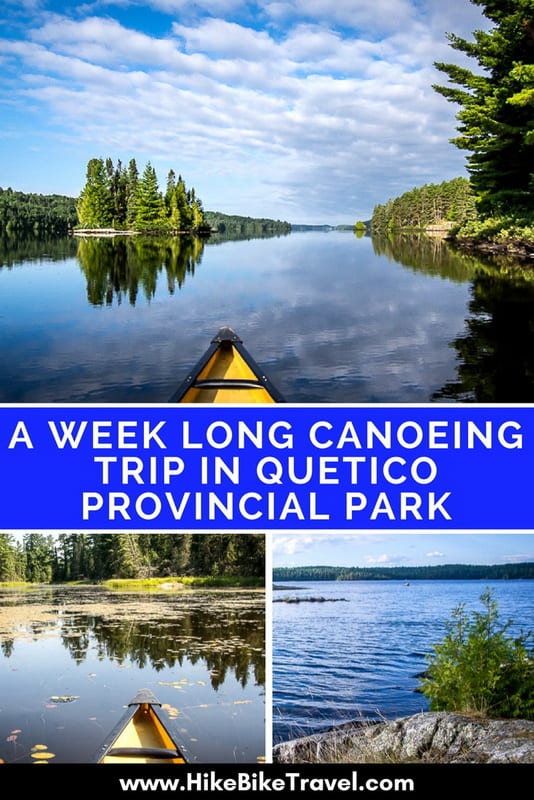 A huge thank you to Destination Ontario, Ontario Parks for all the help in making this trip possible and Canoe Canada Outfitters for the use of their Kevlar canoe, barrels….