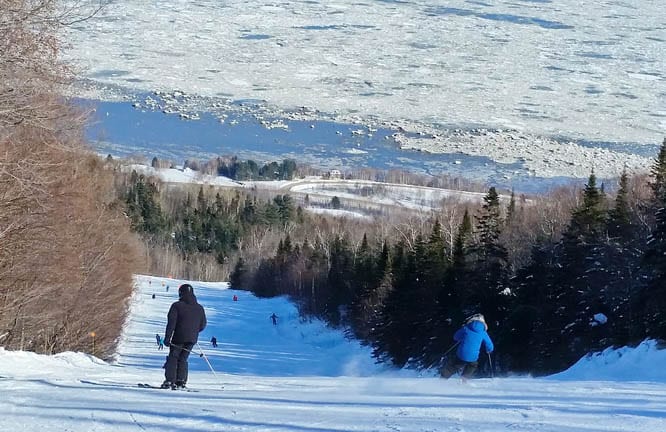 Have you heard of Le Massif de Charlevoix? Virtually unknown outside of Quebec and southern Ontario, this mountain delivers long ski runs with phenomenal in your face St. Lawrence River views. Boasting the biggest vertical drop (770 metre) east of the Rockies, this is a ski hill you’ll want to try.

John and I had the opportunity to ski Le Massif while on a short visit to the spectacular Baie St. Paul area – just 20 minutes away. (And you’ll want a few days here as well for the food and the art galleries.)

The mountain, owned by Cirque du Soleil co-founder, Daniel Gauthier, is the only one I’ve ever visited that boasts a triple black diamond run. Granted it’s seldom open because the snow so rarely sticks to the steep faces, but over 50% of the mountain is geared to the expert skier.

I prefer mellower skiing and stuck to the long intermediate runs in the centre section of the mountain. What surprised me was their length. It felt like they went on forever – a nice feeling for one used to the long runs in the Rocky Mountains.

John and I were lucky to be paired up with Denis, a volunteer ski guide for the day. When you don’t have a lot of time, it’s a treat to be shown the best runs and the lay of the land. Denis is in his 60’s but skis like he’s 16, as does John so I spent the morning chasing them but left them and happily skied alone in the afternoon.

As a resident of Baie St. Paul, Denis is a wonderful ambassador for the area. In spite of his speed on skis, he is a patient and diplomatic man – qualities that were recently put to use showing Governor General David Johnston and his wife around the hill.

This post includes some affiliate links. If you make a qualifying purchase through one of these links, I may receive a small percentage of the sale at no extra cost to you. Thank you for your support

Le Massif in normal years receives huge quantities of snow. Right now it’s got the best skiing in eastern Canada. In an average year it receives 645 cm (21.2 feet) of snow – which is marvelous in every respect except for driving.

We had a clear day on the drive which I was thankful for. Unfortunately there really is no ski-in, ski out property. Instead most people either drive 75 km from Quebec City or 20 km from Baie St. Paul – where you’ll want to stay in the lovely Le Germain Hotel Charlevoix.

The other unusual aspect to this mountain is their menu. You will find no fried foods; instead look for delicious entrées with a decidedly French bent.

A big dining room with massive windows offering views of the river is an inviting place to sit – as is the bar, where you might want to hang out and watch the sun set at the end of the ski day.

You can rent equipment on the hill. Full day lift tickets are being priced dynamically which means they change all the time. Half day tickets from noon on are available. Count on almost $120 for a ticket on Friday, Saturday or Sunday (2022 pricing). Le Massif is famous for its short lift lines. Granted I skied on a weekday but we never waited more than a couple of minutes.

In chatting with people on the gondola the one phrase we repeatedly heard – “this is the most beautiful mountain in eastern Canada to ski.”

I’d agree – and the snow here is awesome.

A big thank you to Le Massif for looking after us so well last week. Visit their website for more information.

Further reading on things to do in Quebec in winter 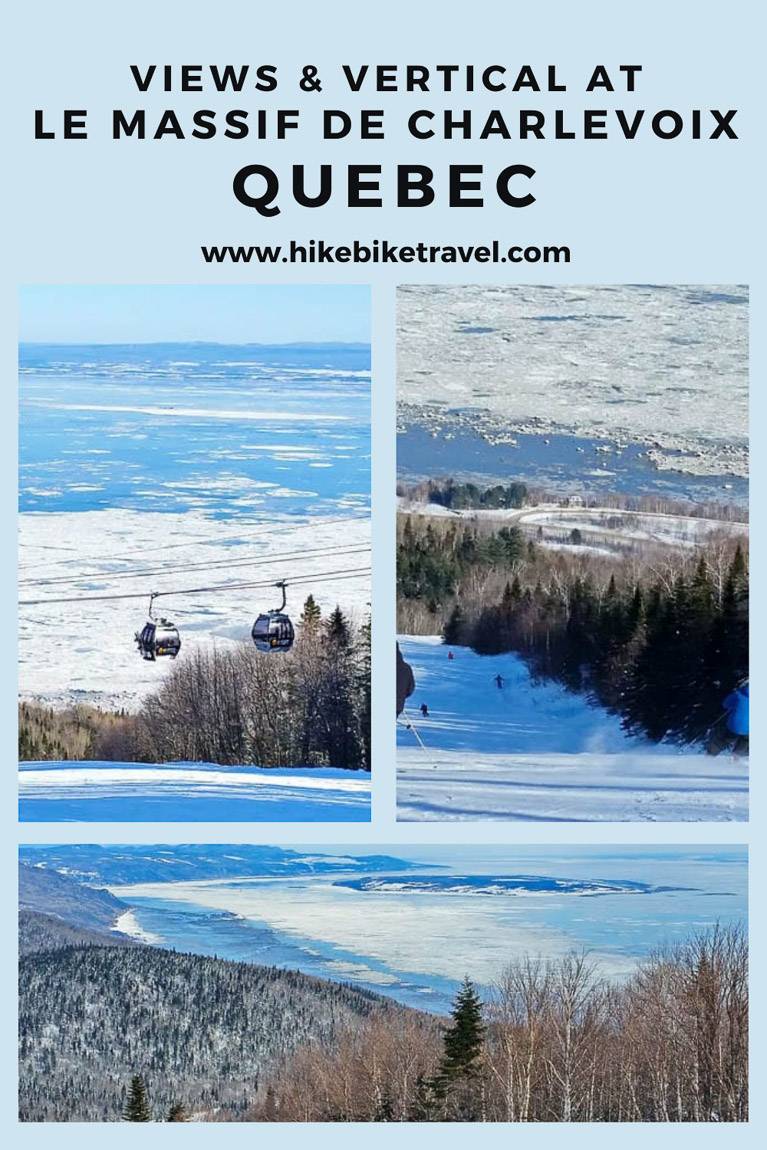