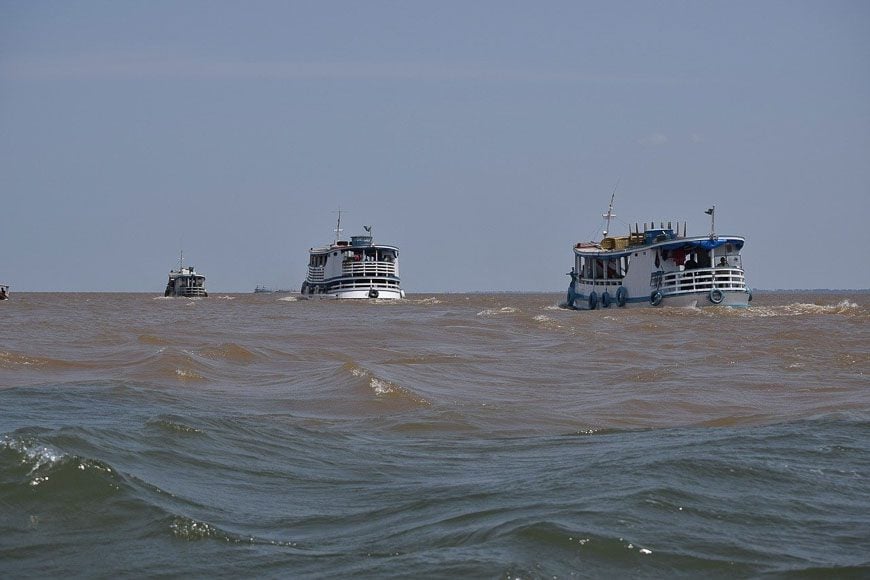 Have you ever wanted to boat the Amazon River from Peru to Brazil? In September 2003, I took a break from Dalhousie University and packed my bag for South America. My flight landed in Lima, Peru, but after a string of bad weather I opted to start my route in Brazil. I couldn’t think of a more challenging way to get there than by cargo boat.

My experience floating down the Amazon River from Iquitos, Peru to Belem, Brazil, was nothing like I had imagined.

Enjoy this guest blog, written by my cousin Andrea Lane, who traveled the Amazon River by boat from Peru to Brazil over three weeks.

I spent three weeks in three boats, each packed to the rim with locals and livestock. I really didn’t know what I was getting myself into.

Iquitos, Peru, the mouth of the Amazon river, can only be reached by boat or plane. After safely landing from a nerve jolting flight, I instantly felt a sense of relief and excitement. I had literally been dropped in the Amazon Jungle. The air was heavy and warm, and I quickly became used to the constant wet drizzle.

Two days later, I arrived at a small port and boarded my first cargo boat. The main floor was no higher then six feet and could comfortably sleep 50 people.

Despite this fact, roughly 100 extra bodies crammed into the provided space. Hammocks were hung up until there was literally no more room. They even covered the windows.

This was of little concern to most as people began occupying space on the floor until there was only a small path left to the front of the boat and the bathroom at the back.

On this particular boat there was one toilet, no shower, multiple cockroaches, chickens, a turtle, a pig, and small children everywhere. I highly recommend securing a small cabin for yourself.

It is the size of a closet but after about 12 hours, a little privacy is heaven. The conditions on the first leg of the trip were by far the worst and to my relief the boats were larger and cleaner as we moved east.

I soaked everything in as we set out, from the people on the boat, to the the lush green forest. As the Amazon opened up, the distinction between one village and another became blurry, as did the days.

The most stimulating activity was chatting with the locals over fresh Amazon fish. I have to admit, I don’t think I will ever be able to eat fried piranha, rice, or beans again.

I couldn’t wait to get off the boat when we stopped for a night in Santa Rosa in Peru. To my surprise, the village only has three hours of electricity every day- I think this is where I gave up on a shower!

My second major stop and boat change was in Tabatinga, Brazil. From here I crossed the boarder into Leticia, Colombia where I got my Brazilian visa. If you’re not too concerned with staying an extra day, and you really want your land legs back, spending time in both cities can be a refreshing change.

The second part of the trip felt like the longest. At certain points, the river was so wide you couldn’t see the other side. Looking at the same view for days on end made one particular sight fascinating- where the dark water of the Rio Negro meets the brown water of Rio Solimµes just below Manaus to form a distinct line. It is incredible.

The final boat left from Manaus, Brazil, which I was surprised to find is a large vibrant city. I highly recommend staying here a few days to enjoy the food, the nightlife, the sights, and the music. Most impressive was the Grand Opera House; it was so extravagant and beautiful it could have been in Paris.

I was overjoyed to arrive in Belem. The journey was mentally and physically exhausting. But, if you can remind yourself of where you are and what your experiencing it is really a once in a lifetime adventure and one I wouldn’t trade for the world.

Further reading on things to do in South America

Unique Peru Experiences to Try Once in Your Life

Have you dreamed of traveling to Peru, a South American country famous for its diverse…

Visiting Machu Picchu: 5 Things You Must Do

Visiting Machu Picchu is high on the list of travelers from around the world. Not…

Sacred Valley Peru – 4 Things You Must Do