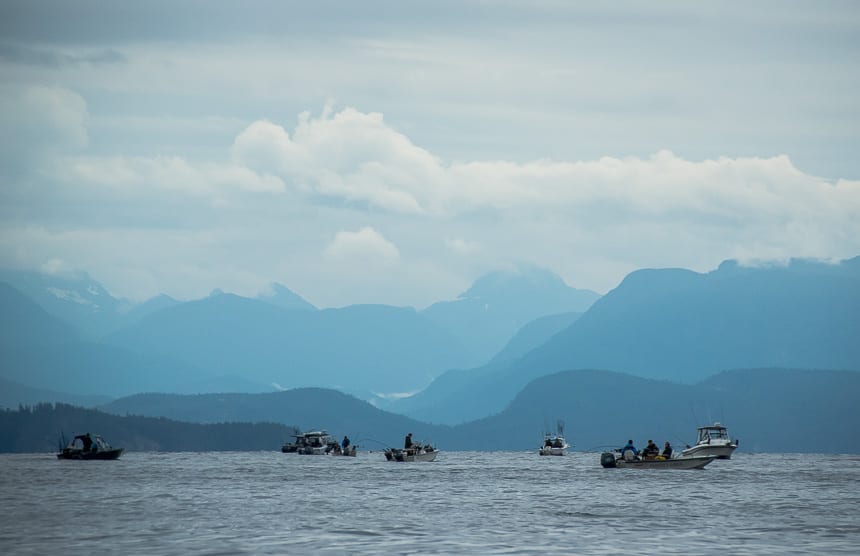 I have done my fair share of salmon fishing but chiefly from the cockpit of my 17 foot sea kayak – jigging off the west coast of Vancouver Island. Although it’s a rather delicate experience at times, it’s been largely a rewarding one.

The day started early – 6 AM ready to hit the water kind of early. With a cup of coffee in hand and clothed from head to toe in heavy-duty rain gear and a super light personal flotation device that inflates if you end up in the water (so you don’t even know you’re wearing it), I was on the dock at the appointed hour, ready to meet my fishing guide for the morning – Dwayne Mustard.

Dwayne has been guiding professionally for over 15 years and knows the waters between Campbell River and the Discovery Islands like the proverbial back of his hand.

I was sure hoping some of his fishing intuition and luck would spill over onto me and I’d be going home with both a salmon and a halibut. Why not dream big!

Salmon fishing in a boat with an open cockpit

I had not fully appreciated until I was picked up on the docks at April Point Lodge that I was going to be out in a boat with an open cockpit for three to four hours.

Granted it wasn’t a kayak but I had envisioned something larger, with a bathroom and a kettle filled with water for my next cup of morning coffee. (Bring a thermos of coffee if you can swing it.) That certainly explained the heavy duty rain attire I was wearing!

As we motored along the west side of Quadra Island towards a shelf where perhaps another dozen boats were out bobbing and setting lines I peppered Dwayne with questions – about types of fish, lures, depth, gear and costs to go it alone.

I’m sure the poor fellow was good and ready to deposit me back on the dock many hours later. But I sure learned a lot.

Why choose to salmon fish off the east coast of Vancouver Island?

There are two major differences between salmon fishing on the west coast of Vancouver Island versus the east coast.

On the west coast you typically have to motor out further before you start fishing whereas the Campbell River fishing experience is very accessible. You may have a line down within 30 minutes of leaving the dock.

The other issue for some people are the ocean conditions. It’s often rougher and wilder on the west coast and though there are plenty of people that love it that way, those that don’t would do well to try fishing out of Campbell River where seas are typically calmer.

When you’re fishing in the waters around the Discovery Islands you are hoping for one of two things; catching a resident Chinook found where the schools of herring hang out in water at least 200 feet deep or catching a migrating salmon with the species varying according to the season.

Catch Coho from June until September, Sockeye and Pinks from mid-July through August and Chum in October.

Once we arrived in the vicinity of the shelf, Dwayne checked the depth sounder looking for large schools of herring. Once he found them he had two fishing rods set up and ready to go in minutes. He told me “do not look at the reel; look at the tip of the rod.” Which I did for three hours.

We motored to new positions, changed lures, banged on the depth sounder and still came up blank. And yet around us we could see people reeling in salmon. Oh well – at least my arms weren’t getting sore as it takes about a minute per pound to reel a salmon in.

And truthfully it was such a lovely morning I enjoyed bobbing in the boat watching the birds, the lone porpoise and appreciating the ocean scenery. It was very Zen-like and though I would have loved to have a salmon in my baggage I was okay with trying.

By the time we started the trip back I counted over 45 boats – a lot of competition in a year where the salmon numbers are so-so. But don’t let that dissuade you.  It’s easy to go fishing out of Campbell River and even though Dwayne calls it an “entry level salmon fishing experience” that was just fine with me.

However, should you be one of the lucky ones to catch a salmon – or several as this family from Europe did, I think you’ll be all smiles.

Where to stay if you want to go salmon fishing

I stayed at the April Point Lodge – which I loved for its location on Quadra Island. Although not quite as convenient as Painter’s Lodge for salmon fishing, the fishing guides will still pick you up right from the dock.

Their sister property – Painter’s Lodge – would be another great choice as all the fishing guides leave and end here so its super convenient, though just as tad pricier than April Point. It’s at the docks here that they will weigh and clean any fish you’ve caught.

This post written by me was made possible with the help of Tourism Vancouver Island. All opinions and text are mine.

A Trip Through the Southern Gulf Islands on BC Ferries

There is much I took for granted when I lived in British Columbia. Sometimes I…