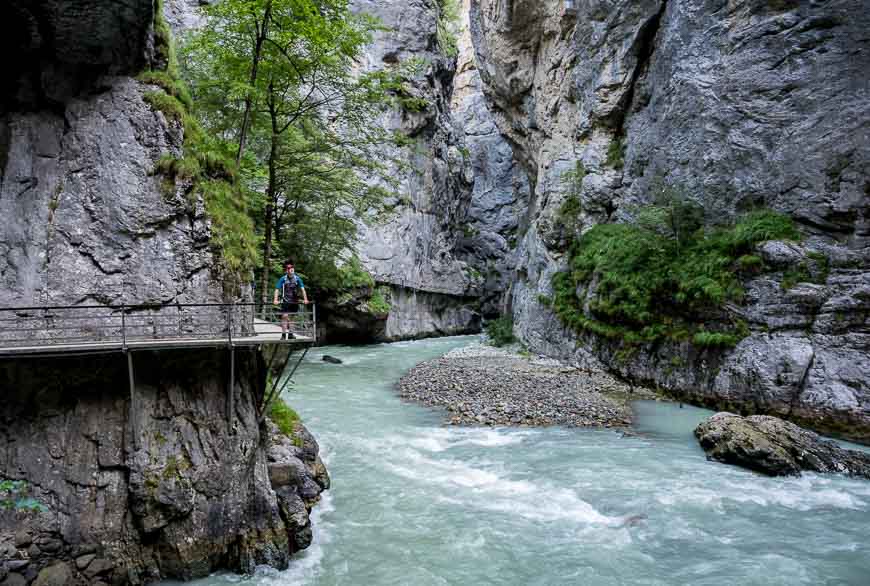 The Aare Gorge canyon walk is another one of Switzerland’s fabulous nature excursions. It’s an easy, family-friendly experience that takes at most, a half day. Access is straight-forward from the town of Meiringen in the Bernese Oberland. (To get your bearings, Interlaken is just 25 minutes west by car.) 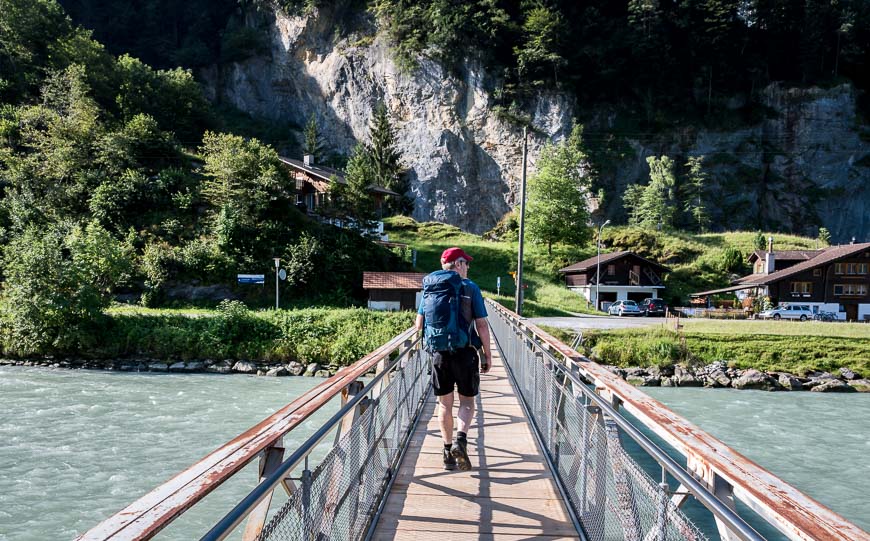 It’s a short walk to the Aare Gorge from Meiringen

The glacier fed Aare River – Switzerland’s longest river – cuts through a narrow limestone gorge thousands of years in the making called the Aare Gorge. It can be viewed via a 1.4 kilometre long walkway. While you can access the walkway at either end of the gorge, the western access is wheelchair and stroller friendly. The eastern access point is not.

The Aare Gorge has been open to visitors since 1888. Since that time there have been ongoing construction projects and improvements with night lighting set up as early as 1912. Restaurants have been in place since 1928 though as recently as 2008 the Aare Restaurant was added. 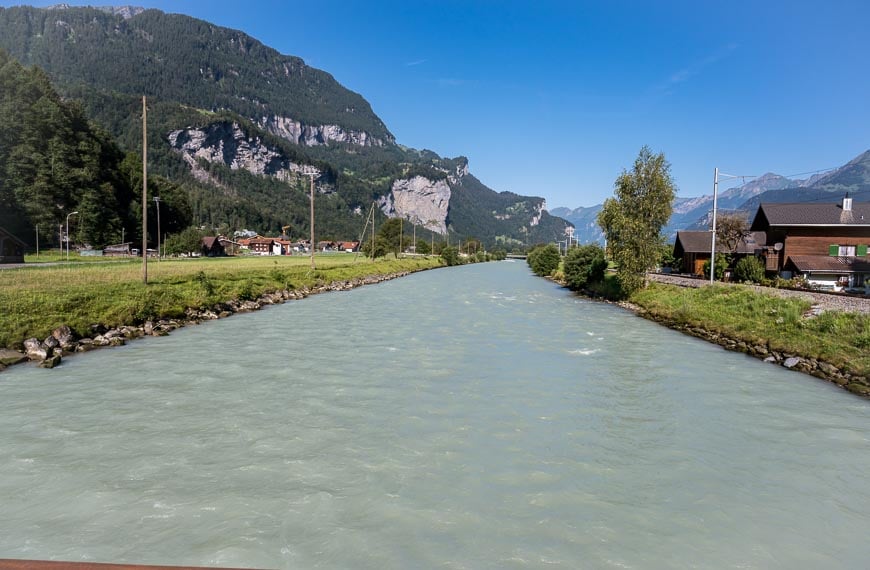 Looking down the Aare River as it heads for Brienz Lake

A walk through the fascinating Aare Gorge in Switzerland

The walk is one of those take your breath away experiences, especially if you start at the western end of the gorge. Immediately you’ll see and feel the power of the river. Peer over the railings to watch the glacially cold water move at speeds ranging from 4 km/h to 13 km/h. In just 12 minutes the water can shoot through the entire length of the gorge.

As you meander down the gorge you’ll go through tunnels but mostly you walk along a catwalk that is either beside the river or cantilevered over it. Photo opportunities – especially with “mood” lighting abound.

At the eastern end of the gorge the walk narrows and in places only one person can pass at a time. But the gorge flattens out here and the drama disappears. Note that you can cross the river at the eastern end via a rope suspension bridge.

During the gorge walk there is one place – the Kleine Enge – where the canyon walls narrow to more than a metre apart. The water pounds through here. At Kleine Enge also check out the impressive glacier mills.

Other points of interest along the walk include a waterfall spilling out of the gorge wall near the eastern end and caves that were used during World War II. Be sure to look up too. In places the gorge walls are up to 200 metres high! 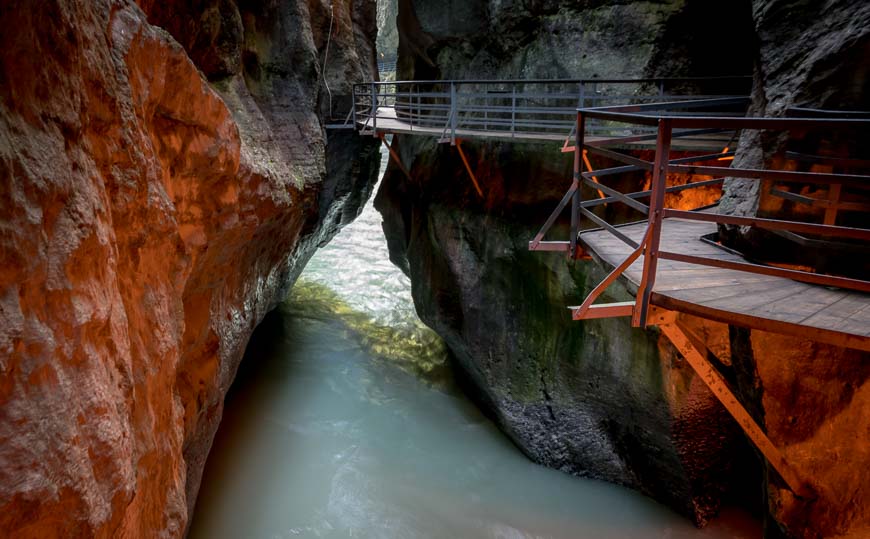 The Aare River forces its way through a narrow section 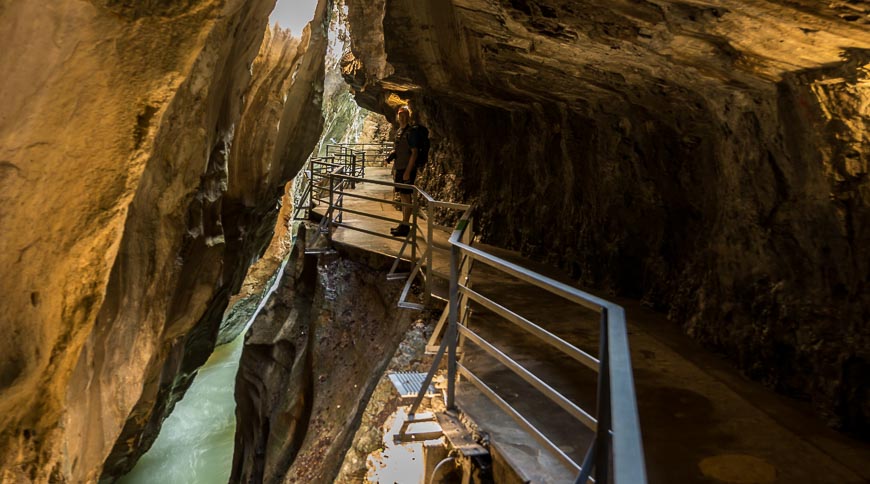 At the the narrowest point the gorge is a metre wide 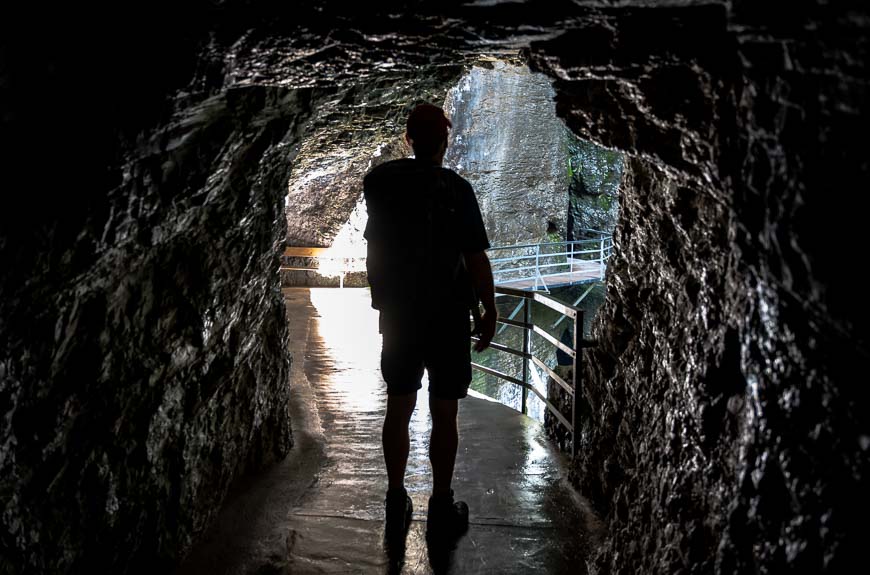 Some of the walk takes you through caves 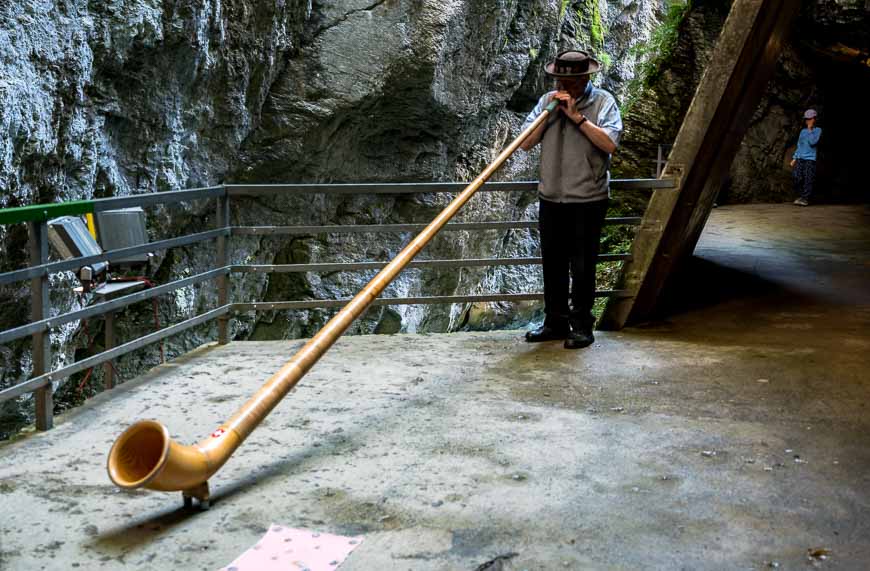 Playing an alphorn beside the Aare Gorge 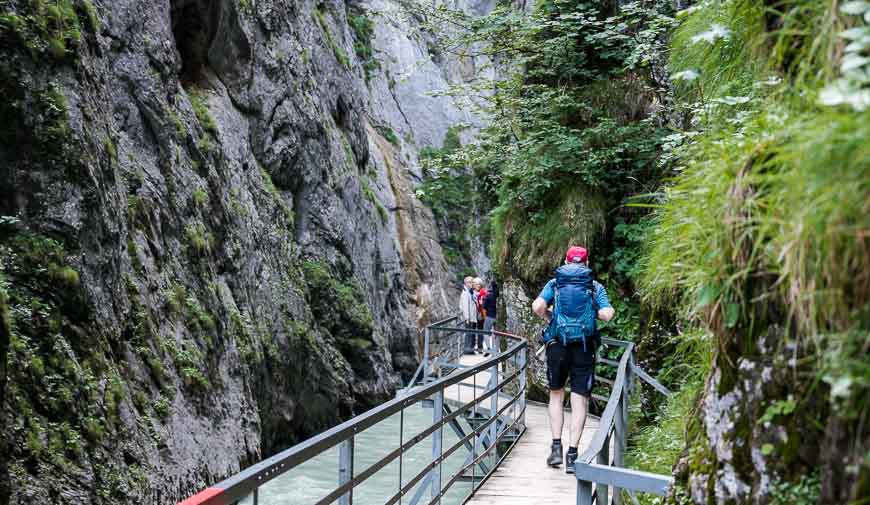 Walking an elevated catwalk through the Aare Gorge 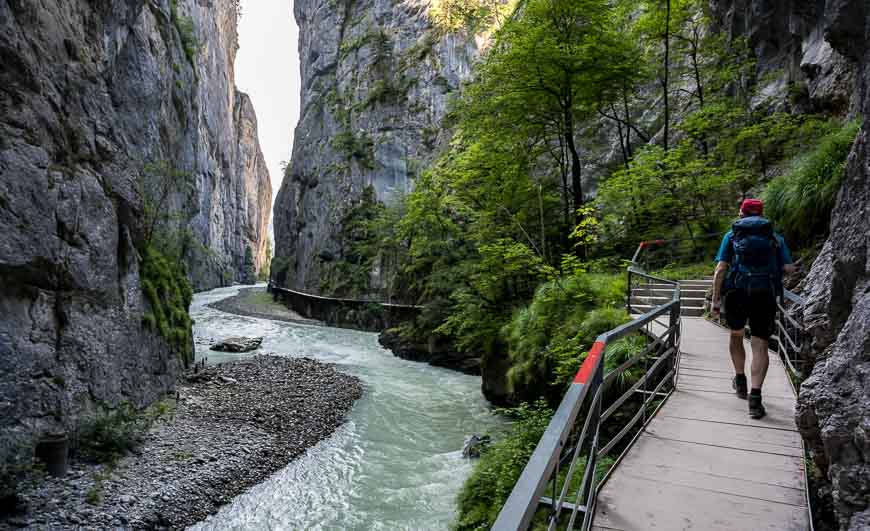 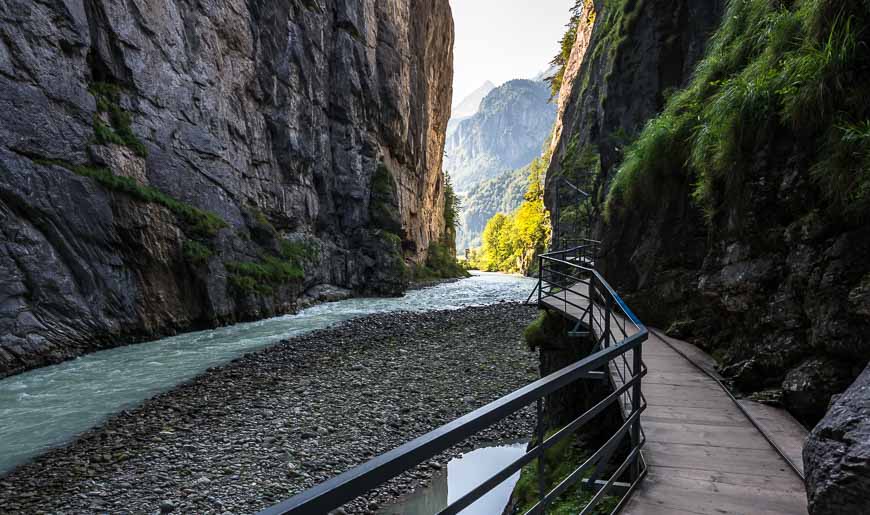 Almost at the eastern entrance of Aare Gorge 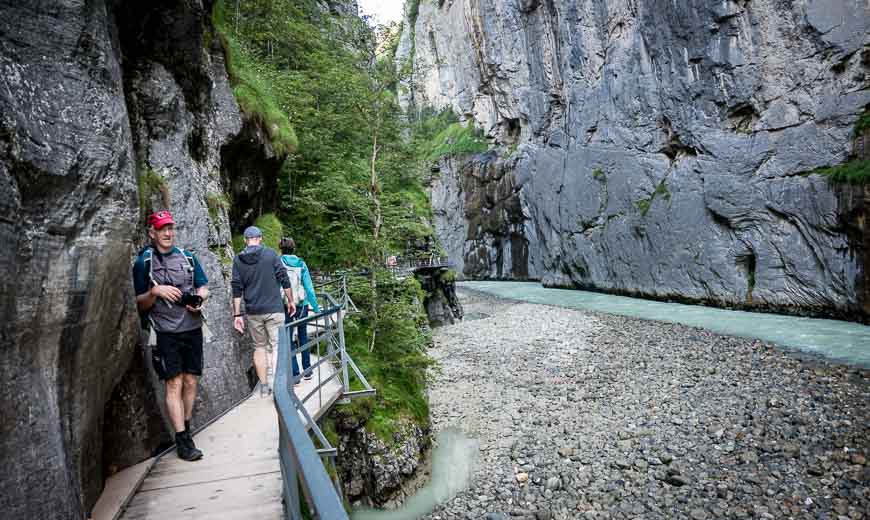 The Aare Gorge is located between Meiringen and Innertkirchen. The western entrance with more extensive facilities (playground, gift shop and restaurant) is the easiest access point from Meiringen. If you’re coming from Innertkirchen, use the eastern entrance unless you’ve got a stroller or wheelchair. The walkway is only accessible for approximately half its length with strollers/wheelchairs.

The western entrance opens in early April, the eastern entrance in mid-May. Both close in early November. Hours are 8:30 AM – 5:30 PM in summer though it’s open till 10 PM for part of the week. Check the website for exact times. 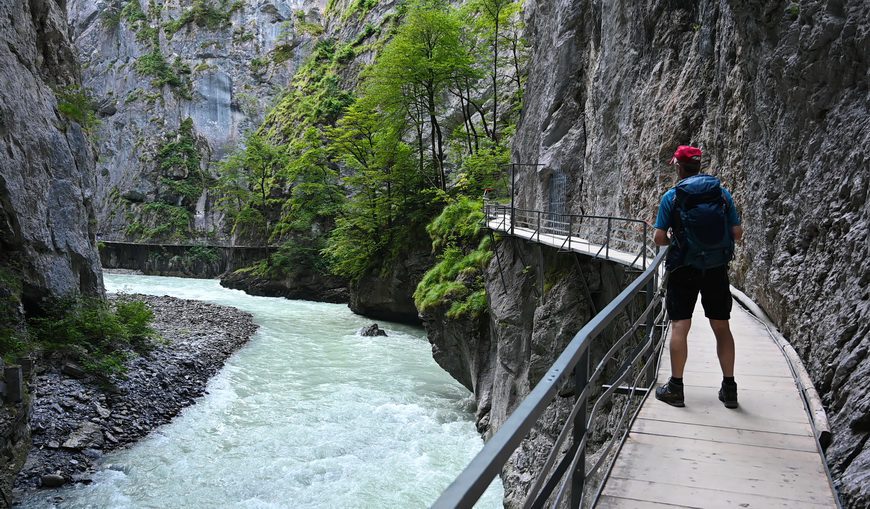 John admiring the view down the gorge

From the train station in Meiringen

It’s easy to get to Meiringen by train from Interlaken – or indeed anywhere in Switzerland. It only took us three hours with a couple of stops from the Zurich Airport. If you get a Swiss Travel Pass you can hop on and off with ease. From the train station in Meiringen allow about 30 minutes to get to the gorge on foot.

Where to stay in Meiringen

My favourite hotel over our 10 day trip in Switzerland was the fabulous Hotel Victoria Meiringen – situated across from the Sherlock Holmes Museum. Rooms are clean, modern and very comfortable. Both breakfasts and dinners here are outstanding.

A big thank you to Switzerland Tourism for hosting my stay. 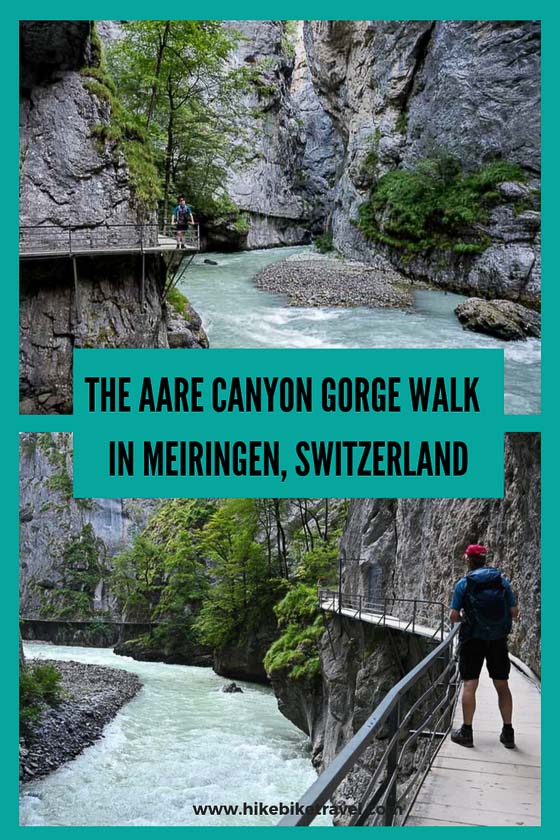 5 Adventures in Europe You’ll Want to Do

These 5 adventures in Europe are ones you'll want to try.   But before you decide…

“My revenge is just begun! And I spread it over centuries, and time is on…