Sometimes it’s the adventures you don’t plan that turn out to be highly memorable. The hike to Siffleur Falls in David Thompson Country was one such adventure. It was totally unplanned – and even in early March, a highly worthwhile hike. The trailhead is accessed from Highway 11 – a super scenic section of highway that runs east from Saskatchewan River Crossing to connect with Highway 12 west of Settler, Alberta.

John and I had other ideas for the day but because of my wimpiness when it comes to driving on deserted, snow covered roads, we chose to return to Calgary via Lake Louise and Banff instead of Rocky Mountain House – where we’d spent a delightful couple of nights. 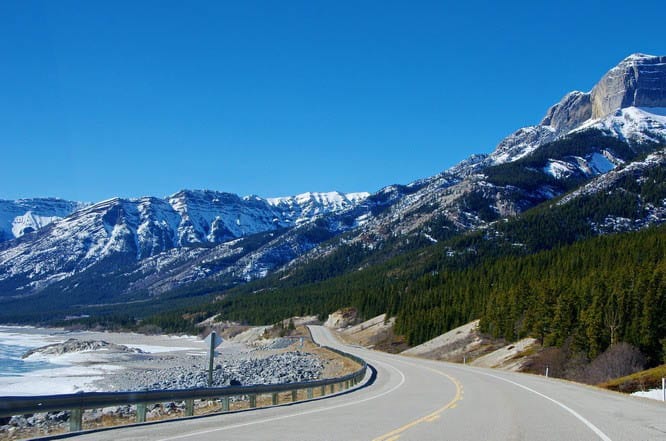 Pretty scenery on the way to Siffleur Falls

I’d driven this section of highway years ago on the way to Aurum Lodge, but I must have been too busy chatting in the car to have noticed the scenery. It’s almost Icefields Parkway kind of spectacular!

The trailhead to Siffleur Falls on the south side of the highway is well marked. I never did see any information about the length of the trail but perhaps I wasn’t looking in the right spot. I originally thought it would be a 15 minute sort of hike. It’s not!

The hike to Siffleur Falls

To get to the first set of falls, it’s 4 kilometres one way – on an easy trail but it’s likely to take you at least an hour, especially if you’re a photographer.

Cross the suspension bridge over the North Saskatchewan River – offering superb views in either direction. Continue on a long wooden boardwalk, put in place to protect the area that is incredibly sensitive to wind erosion.

At the end of the boardwalk, continue along a gravel road to reach the Siffleur River Bridge. Continue up the trail – that can be muddy or icy in sections, depending on when you visit. Reach the first set of falls at the 4 kilometre mark.

Had we known the state of the trail, I would also have taken icers with me – those grippers you attach to your shoes or boots to make walking easier. You can buy them here. 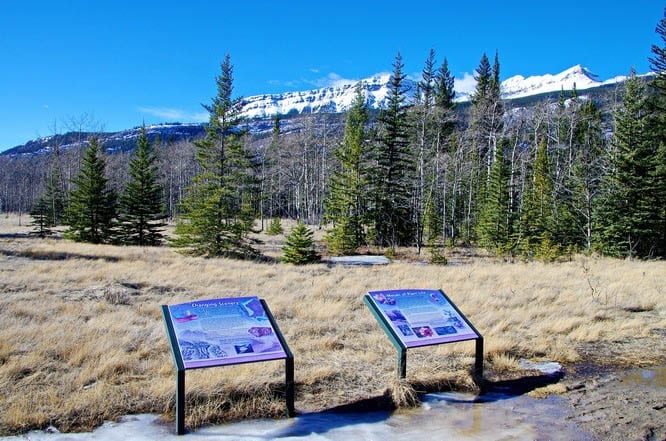 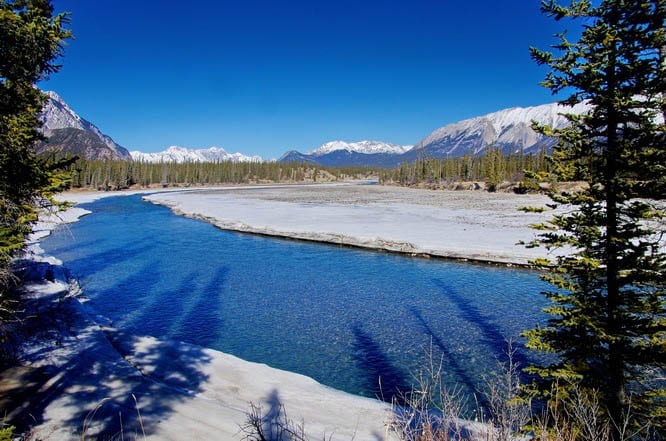 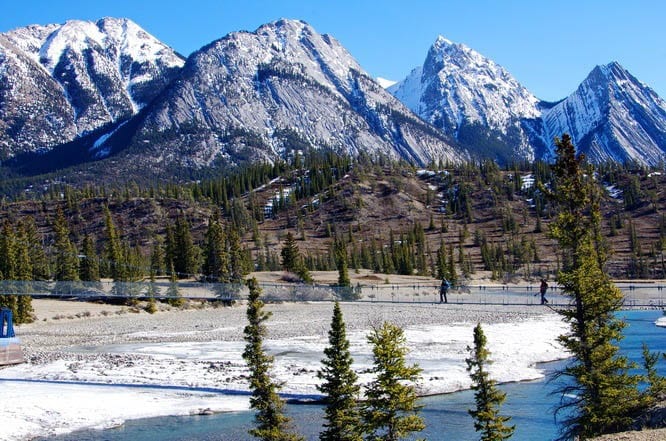 Crossing the river via a suspension bridge 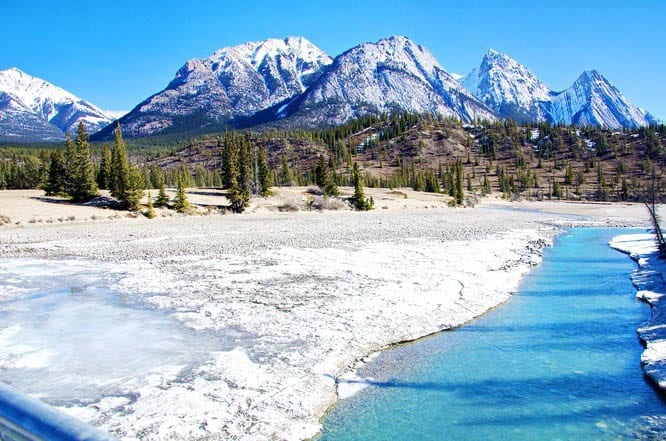 The North Saskatchewan River is a very appealing colour of blue 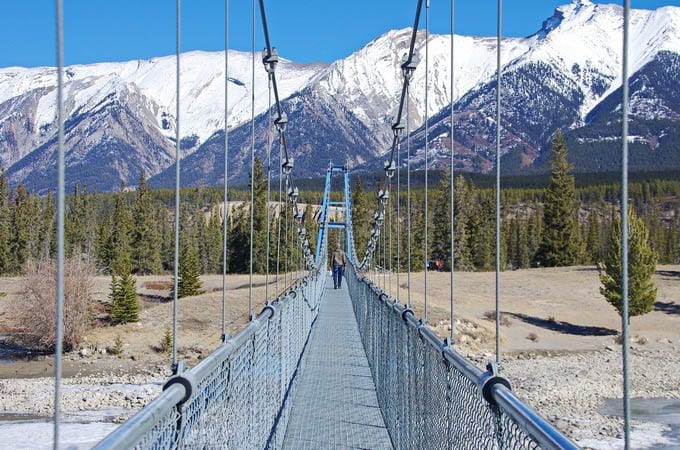 The long suspension bridge across the North Saskatchewan River 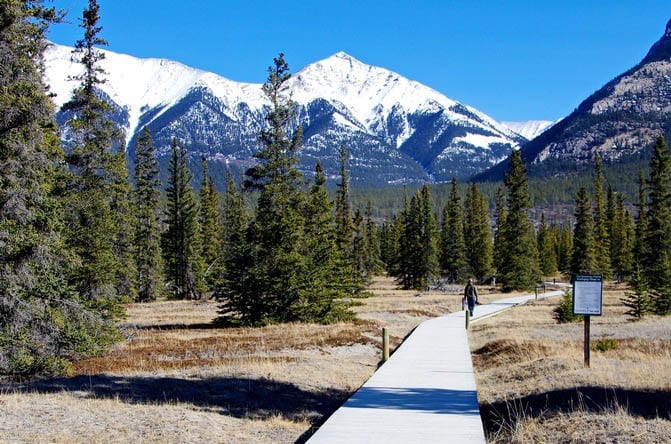 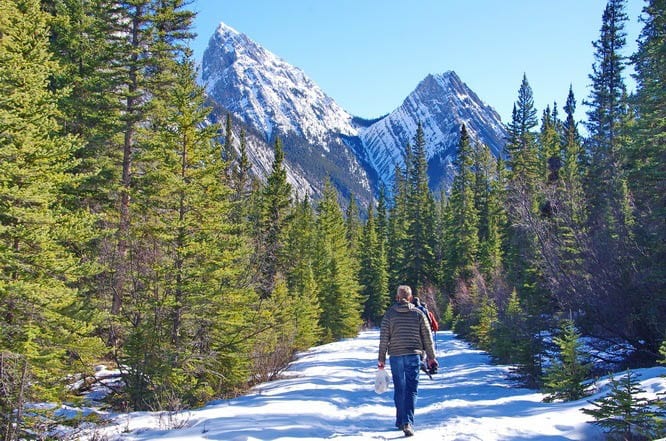 An easy section of snow, mud and puddles

What does siffleur mean?

When we arrived at the gorge area, a sign explained where the name Siffleur originated. In French, siffleur is the word for whistling.

I guess there are (or were) a lot of hoary marmots in the area. Known for their particularly loud whistling, Sir James Hector in 1858 decided to name Siffleur Mountain and Siffleur Falls after the marmots. 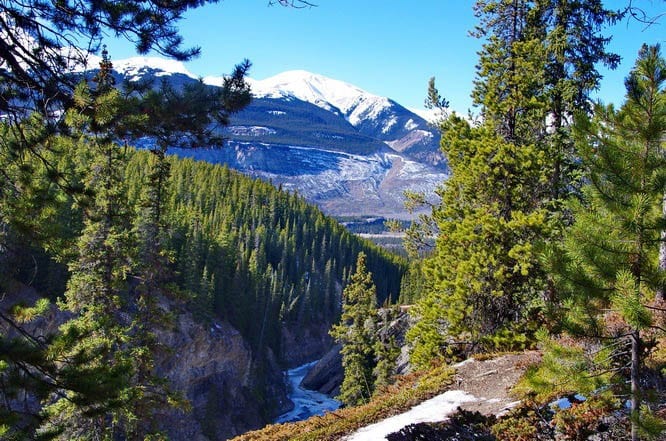 John and I went only as far as the first set of waterfalls. There are two more waterfalls – the next set another 2.5 kilometres up the trail and the third set a further 1.5 kilometres. I understand that there’s a small campsite at the final set of falls.

This would be a delightful hike to do again in the summer. To see the water roaring through the gorge would be quite the sight.

Until all the snow melts, exercise extreme caution on the sections of icy trail that are adjacent to any drop-offs. Kids and dogs were on the trail. Keep an eye on both as a few unfortunate people have lost their lives here. 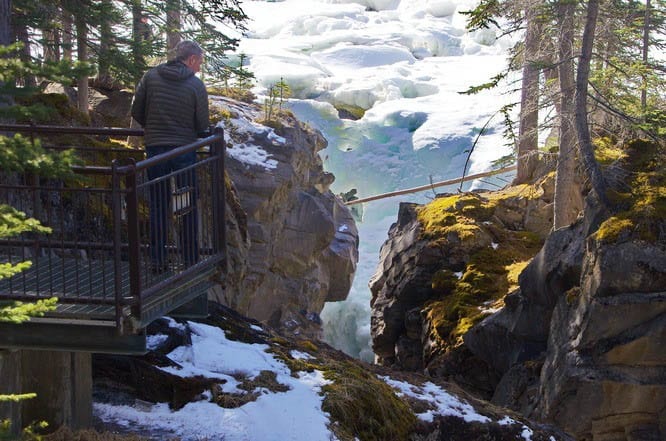 You can hear the water; this would be an amazing place to stand during the spring melt 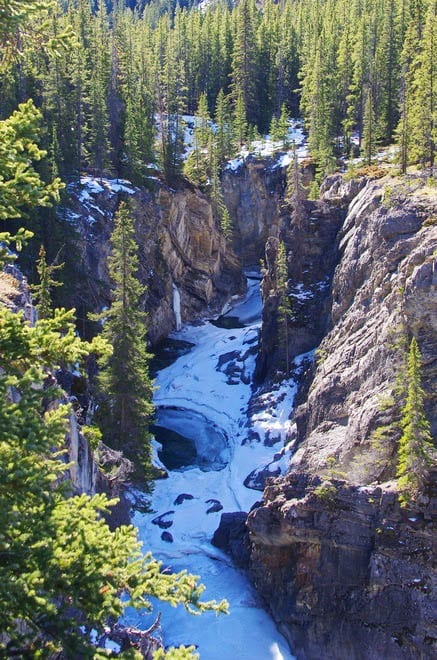 Looking down into the gorge 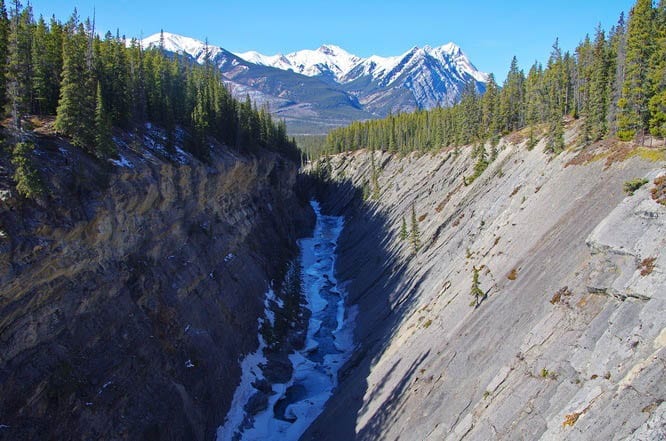 Looking down the gorge

It’s definitely easier going up the slippery section than down 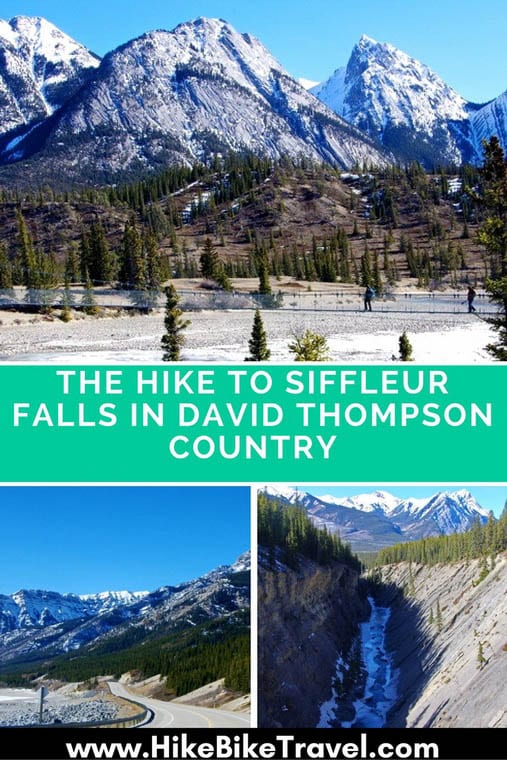 On Friday I wrote a blog entitled Thank Heavens for Long Weekends. And I can now…

A Hike on the Nut Point Trail near La Ronge, SK

The Hike to Nigel Pass in Jasper National Park