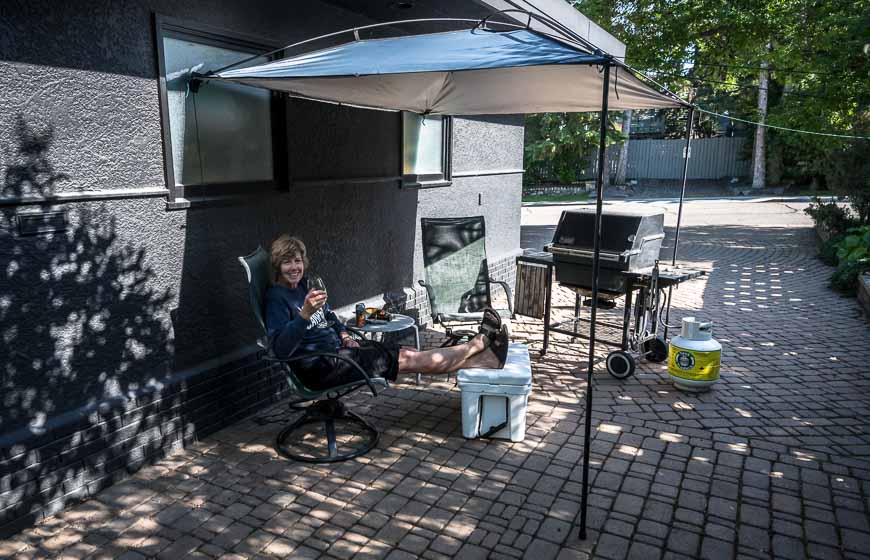 If you’re a camper, I think you’ll find the MoonShade to be an incredibly useful piece of gear. It’s a lightweight, portable awning that attaches to vans, cars or trucks (via two very strong magnets) or to windows via suction cups. Don’t have any of the above? You can still tie it off with guylines to a fence, tree or door frame. The bottom line – it’s very portable and it can be used in a variety of situations.

The MoonShade was designed by a couple of guys in San Francisco – Matthew Pearson and Henry Proegler back in 2018. It seems they raised some money on Kickstarter in 2019 – and now the product is available for purchase on their website. They do ship to Canada. What I liked about this portable awning is that it comes in its own carrying sack with a strap that is about the size of your average yoga mat. It weighs in at under 8 pounds and sets up in minutes.

And more than that – it’s a highly useful piece of camping gear that I could see using every time we go car camping.

Putting up the MoonShade

The MoonShade is a snap to put up though granted it took longer the first time as I had to read the instructions. I think on the second go-round I could have it up – and staked if necessary – in under 5 minutes. One person can easily assemble it.

We used the suction cups as anchors rather than the magnet – which is what you’d typically use if you were attaching it to a vehicle.

To put it up I attached two suction cups to the window. Then I put in the two tension poles in the main shade – just like I would with our tent. Next I hooked the carabiners onto the suction cups (see below), put the two upright support poles into the grommets and voila. There are also guylines you can attach to each corner to tie it off – which I did to our fence. If you were camping, attach the guylines to the stakes and shove them into the ground.

What materials are used in the MoonShade?

The MoonShade was designed for camper vans and camping in general. It’s made up of water-resistant 420D recycled yarn ripstock polyester, high strength aluminum poles, well-designed suction cups and a couple of heavy-duty magnets. There are carabiner clips, guylines, aluminum Y-profile stakes and mini-paracord for overhead anchoring.

During daylight hours a resilient reflective coating provides maximum sun protection. Reportedly at night, this coating reflects the glow of any LED lantern, lighting the area below.

When it’s all set up, The MoonShade covers 9 feet by 7 feet – which as you can see in the photo is enough room to get a couple of chairs under it with a cooler or two and still have room to move around.

This is a product I really love – well-built, totally useful and something I can see using a lot in a variety of situations.

Below is a guest post from my daughter Kristen. Recently we had the opportunity to…

With the clock ticking down to Christmas, it's time to start thinking about gifts for…