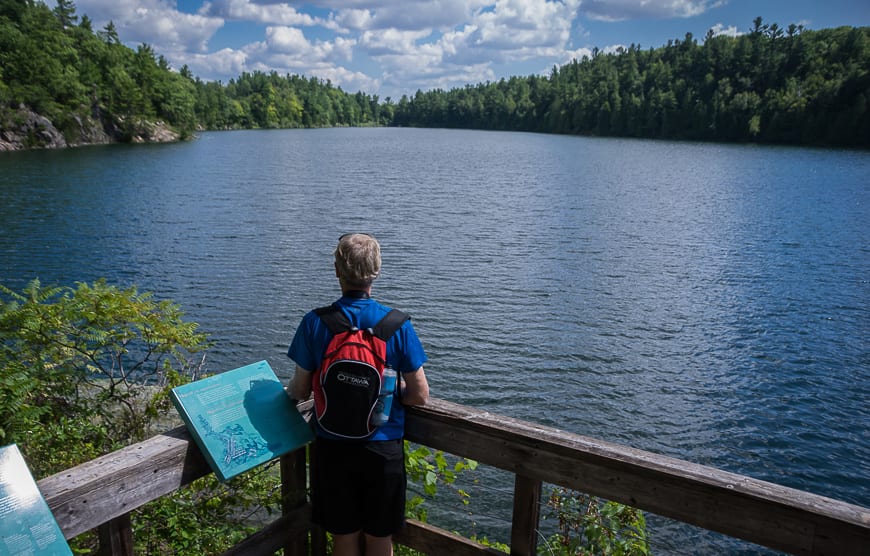 The Secret of Pink Lake in Gatineau Park

Pink Lake in Gatineau Park, located less than a half hour drive from downtown Ottawa, is not what you think it might be. First off, the only thing pink about it are the colourful visitors ambling around the lake on the Pink Lake Trail. The Pink part relates to the name of the family that settled nearby and “loaned” their name to the lake.

One can walk 2.5 km around Pink Lake in Gatineau Park on a well-maintained trail but fair warning – it is not wheelchair friendly. To facilitate climbing and descending the steep little bluffs on the trail there are several well constructed stairways.

This post includes some affiliate links. If you make a purchase via one of these links, I will receive a small commission at no extra cost to you. Thank you very much.

Personally, we love going up and down stairs as that is awesome conditioning for our adventures…. however it must be reported that not all patrons were equally excited.

So about that secret

It all started about 9,000 years ago when the continental ice sheet which was over 1.6 km thick had retreated from the Ottawa-Gatineau area. That much weight actually sinks the earth’s crust about 175 metres.

Given Ottawa is only about 35 metres above sea level that means – you guessed it – that Ottawa and what is now Pink Lake in Gatineau Park were under the sea. That sea called the Champlain Sea deposited sediments called the Leda clay in respect of the small marine clams it contains.

As mentioned in the Mer Bleu blog, they have also found beluga whale bones and notably humpback whale bones near Smith Falls in the Leda clay as well.

At that time Pink Lake wasn’t a lake at all but rather a big pothole in the sea floor. Once the glaciers melted and meltwater ran off, the earth’s crust started rising in a process known as (you’ll impress your friends with these words) isostatic rebound.

This pothole which was  filled with seawater rose above sea level and has now become a lake. Not Pink Lake right away because the Pinks still had not emigrated to Canada.

This small (one km long) rising lake is special because it has a high rim not much bigger than the lake itself so its catchment area is small and no rivers or creeks flow into it.

So what you might say. Well, this means the original saltwater trapped in the lake took a very long time to be diluted with fresh water…. so long in fact that a fish trapped in the seawater in the rising lake called a 3 spined stickleback has evolved from a saltwater fish into a freshwater fish.

Because so little new water flows into the lake and the high rims protect it from the wind there is very little mixing of water in the lake, in fact so little that the lake is one of the few meromictic lakes in the world. Crazy eh!

The bottom seven metres of this 20 metre deep lake have virtually no oxygen. In fact, there is algae in this oxygen poor zone that photosynthesizes with sulfur not CO2. Lots of “normal” algae grows in the upper water and so Pink Lake is actually more greenish than not.

The trail is wrapped in Mother Nature’s arms so it is peaceful and soothing. There are pretty steady views of the lake at water level and from some higher outlooks. A couple of outlooks have seats and you may want to linger awhile. Birders keep your eyes and ears open. You’ll walk by some old pits where they used to mine mica. And you can see lots of 3 spined stickleback fish milling about near shore.

A family-friendly outing in Gatineau Park

All in all it’s a very pleasant short hike, likely to be shared with a lot of young families like we did on a weekend. There is more geology that is interesting but that would be pushing my luck especially after I snuck in the mica mine in the previous paragraph.

That secret I was talking about; everybody that walks around Pink Lake and reads the great information panels will know the secret too!

More reading of things to do in the area

If you want another interesting hike check out the nearby Carbide Willson Ruins.

And if you’ve never been to Ottawa these are 10 things you must do on a visit to the city.

Want to learn some fun and interesting facts about Ottawa? Sure you do.

Where to stay near Pink Lake

Ottawa, Old Chelsea and even the town of Wakefield are both close by. Here are a couple of suggestions, mostly based on personal experience.

In Ottawa I have enjoyed a stay at the Andaz Hotel perfectly located in the Byward Market area. The Westin Ottawa – just a stone’s throw from the Rideau Canal is also a very good choice.

And in Old Chelsea, Auberge Old Chelsea would be a great choice, especially if you have plans to visit the Nordik Spa. 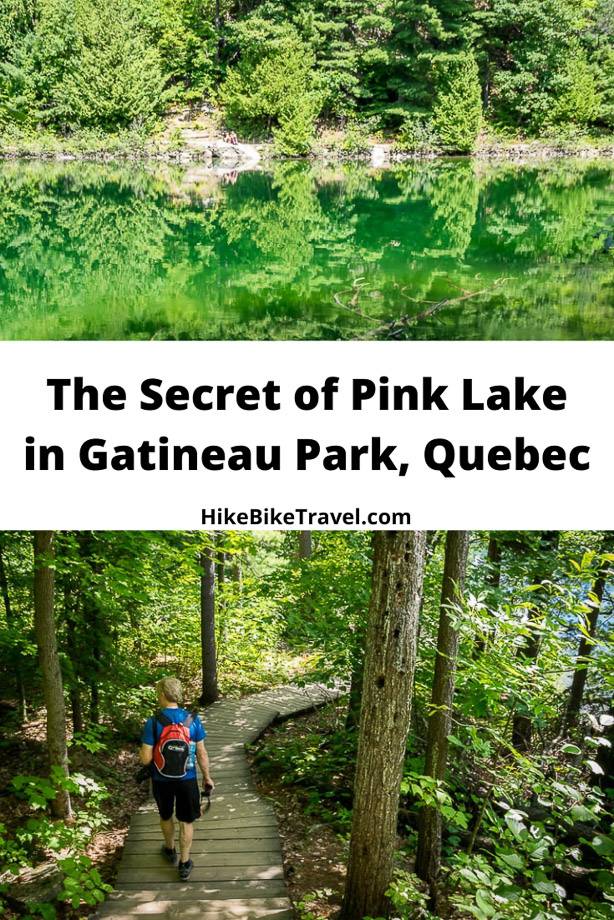 Thank you to my geologist husband John for penning this blog and to Ottawa Tourism for hosting us.