I had a week to explore Minnesota on a bike. That’s not much time considering its size and its label – the most bike friendly state in the US. There’s a lot to explore without adding in Saint Paul or Minneapolis. But they were included on my itinerary so I got a small taste of what both cities offered. I don’t want to put my foot in my mouth and say one is better than the other. They’re just different. What I loved was the sheer number of dedicated bike lanes and the ease of exploring the best areas of both cities on a bike. In fact as a visitor, I’d be inclined to forget the rental car, stay somewhere central and see what I could on a bike.

Here’s a look at both Minneapolis and Saint Paul from the seat of a bike.

I had a couple of opportunities to bike in Saint Paul. The first was the experience on the Gateway Trail described in my post – Saint Paul to Stillwater via the Gateway Trail. Although I had help navigating the backroads to get onto that trail, I still came away impressed at how bike friendly Saint Paul is and the fact that there are plans to make it even more so. The Capital City Bikeway, a collection of off street bike trails, is still a work in progress with some sections completed and more scheduled to be finished in 2017.

One morning was set aside to cycle and explore the full length of Summit Avenue (about five miles) from the edge of downtown past the longest stretch of “intact Victorian architecture in the US.” I’d spent the night in Saint Paul at the fabulous Corban Manor Inn in the heart of the Cathedral Hill – Summit Avenue neighbourhood so Summit Avenue was all of a half block away. 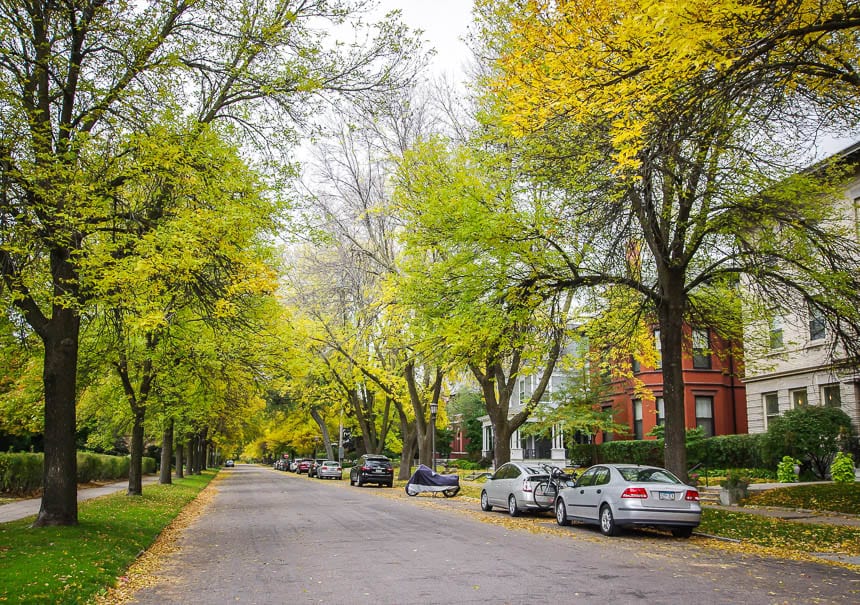 Leafy side streets off Summit Avenue; The Corban Inn is on one such side street

Summit Avenue is a gem. It’s got a full sized bike lane down each side of the road and although a few blocks of the street are busy, most of it is quiet. The bike ride involves a lot of architectural eye candy – including the Governor’s mansion and the former home of F. Scott Fitzgerald. I was surprised at the prices compared to what we pay in big cities in Canada. (See below.) 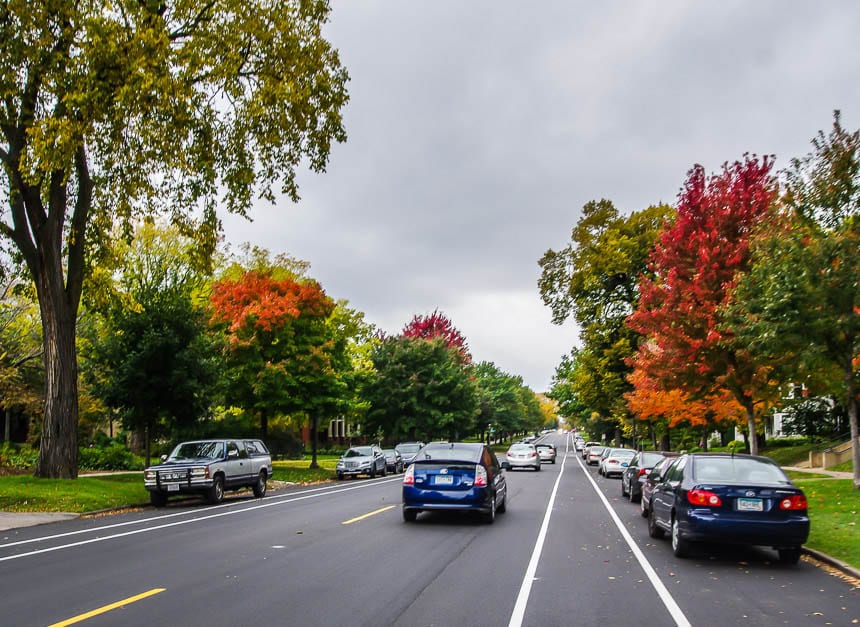 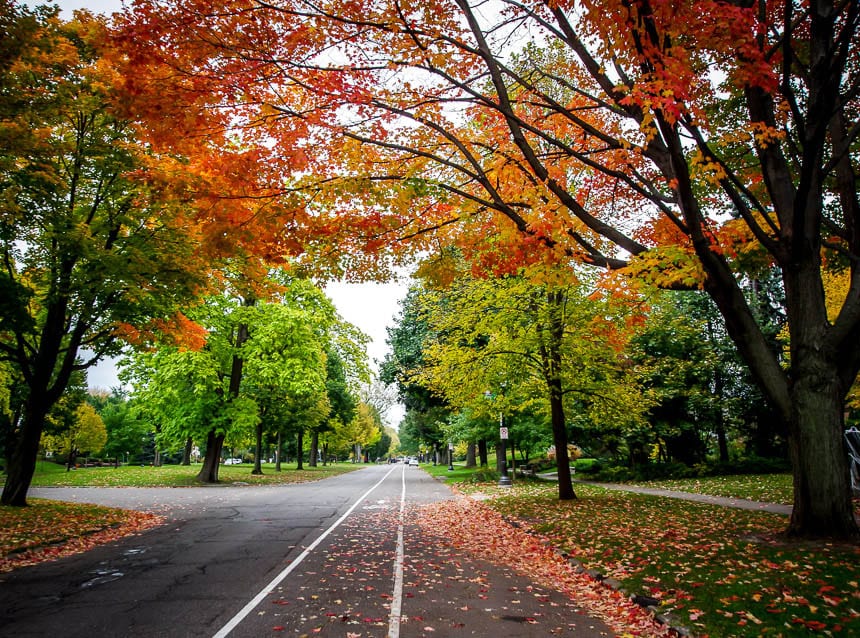 Summit Avenue starts at the impossible-to-miss Cathedral of Saint Paul with its 306 foot high copper dome. It’s the third largest church in the United States. From there it eventually runs into a narrow but beautiful park along a section of the Mississippi River. You can hook up with more bike friendly trails and head in either direction if time allows. If not retrace your steps to the cathedral and then cycle three blocks west and hang out at what appears to be a local favourite – Nina’s Coffee Café. 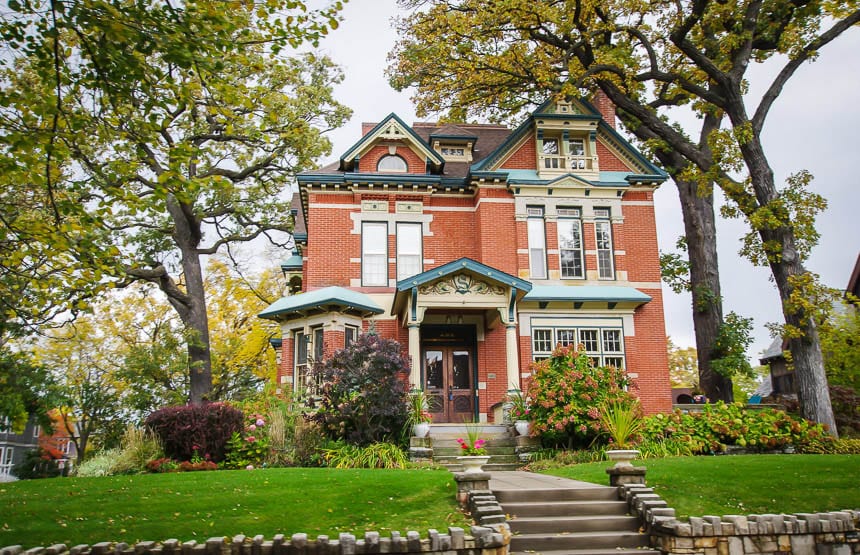 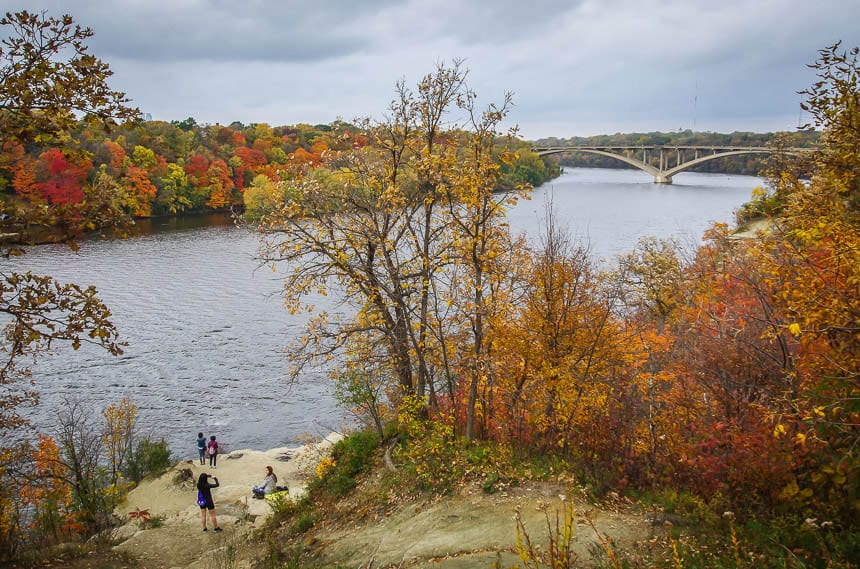 I had two opportunities to bike in Minneapolis. The first, a tour of the hot spots in the city with Alyssa Kohn, the owner of Minneapolis by Bike and the second a fast paced ride with David Cronin from Le Meridien Chambers Hotel, a luxurious hotel in the heart of the theatre district.

From a little hole in the wall (and hard to find) location,Alyssa offers bike rentals and guided bike tours with a difference. Instead of stopping to describe an area, she narrates the tour via headphones so you can cover a lot more ground. Guests can still ask questions so it sure makes for a seamless experience.

Over a few hours we covered some of the best bits of Minneapolis including Hennepin Avenue, immortalized in songs by Tom Waits and Lucinda Williams as well as the Prince movie – Purple Rain. From there we crossed the Hennepin Avenue Bridge, rolled over Nicollet Island Park, stopped to get some of the best views of the city from the Water Power Plant and continued across the historic Stone Arch Bridge. Its here on the pedestrian and bike friendly bridge that you get a great view of the Mississippi River. The last part of our journey continued through the core of the city on nice wide bike lanes to end near Loring Park. What a great way to get a quick overview of Minneapolis! 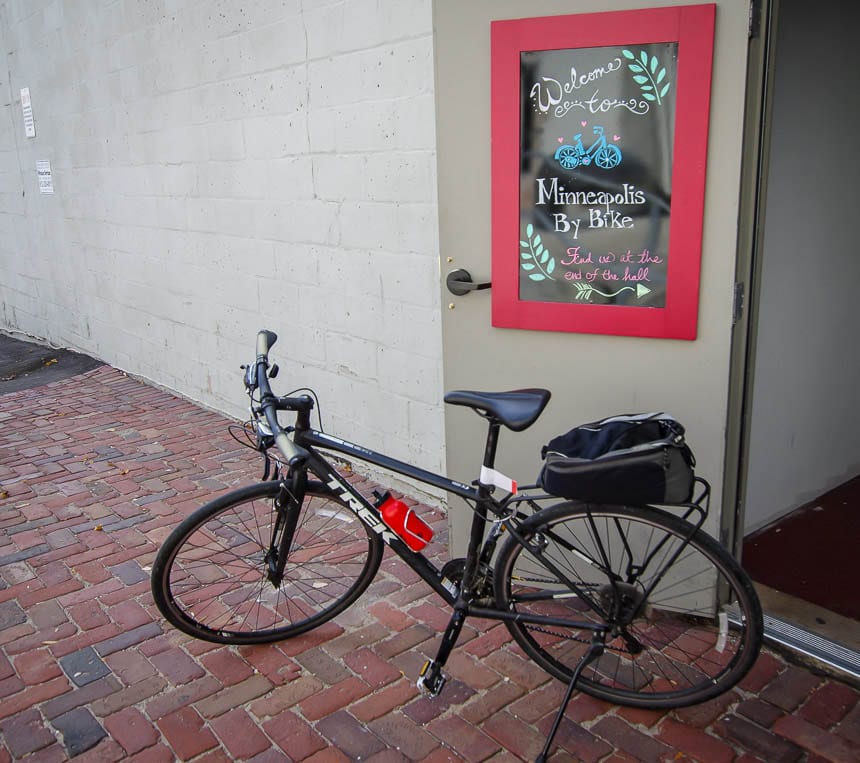 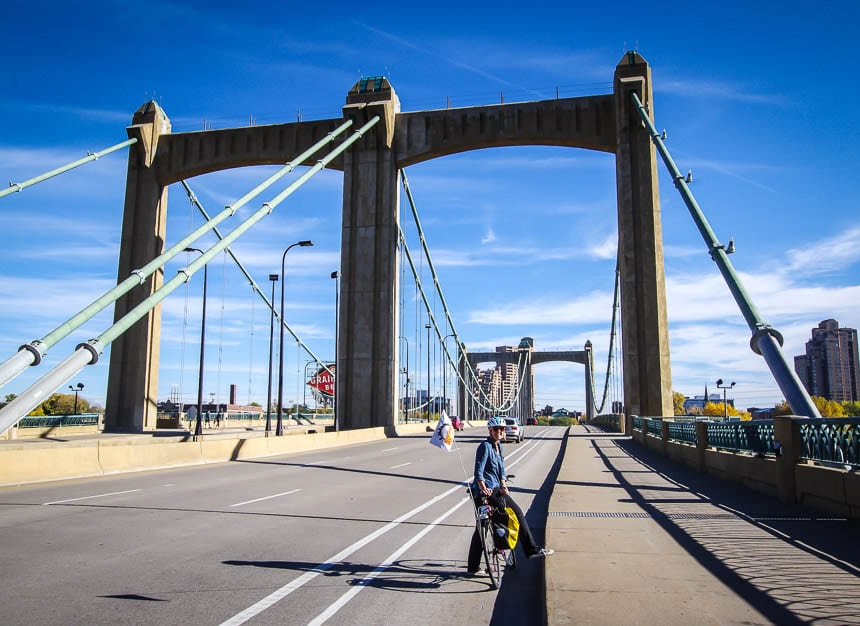 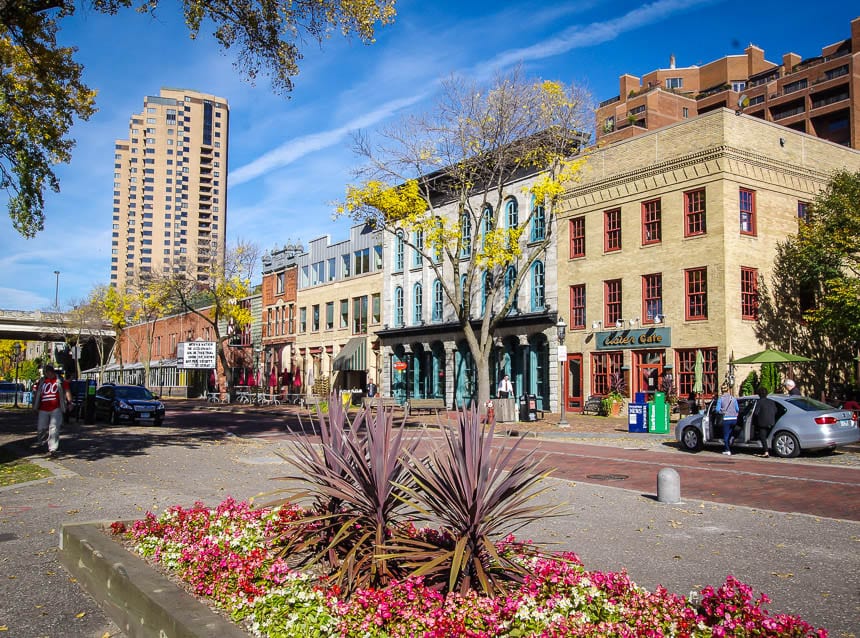 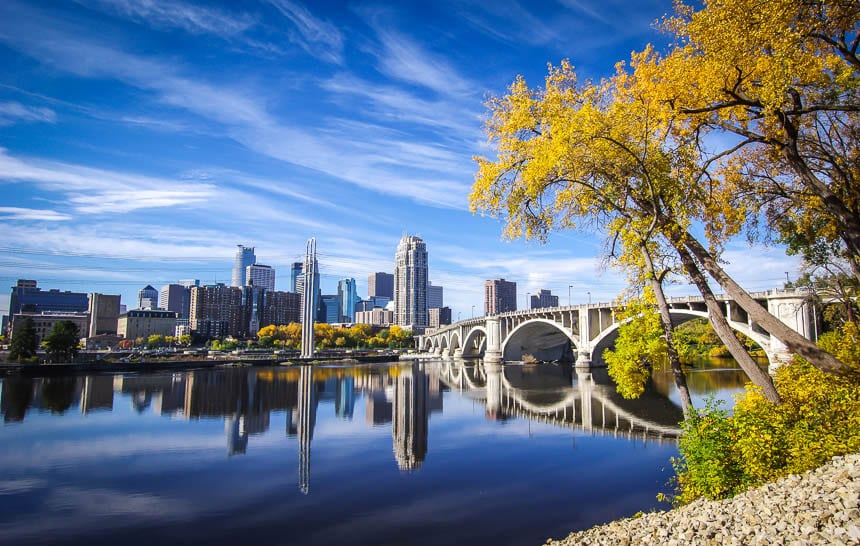 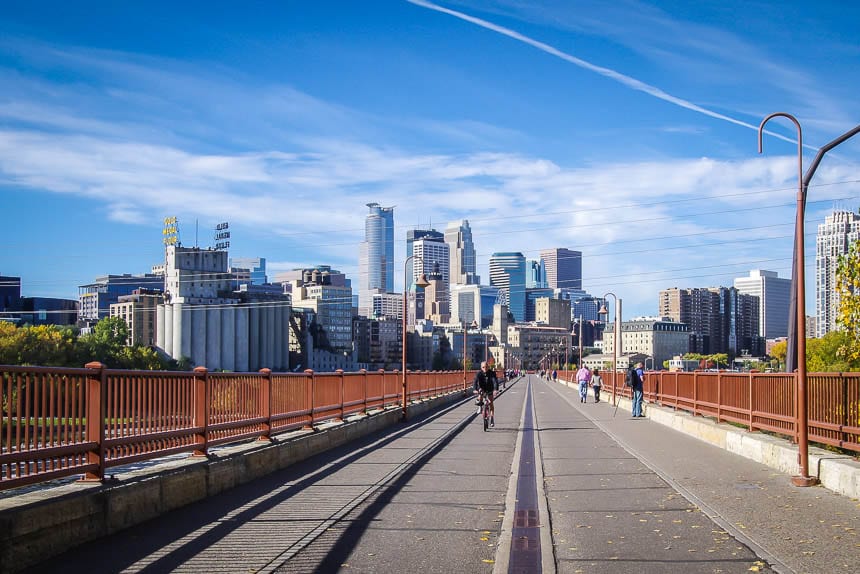 Cycling across the Stone Arch Bridge – a former railway bridge 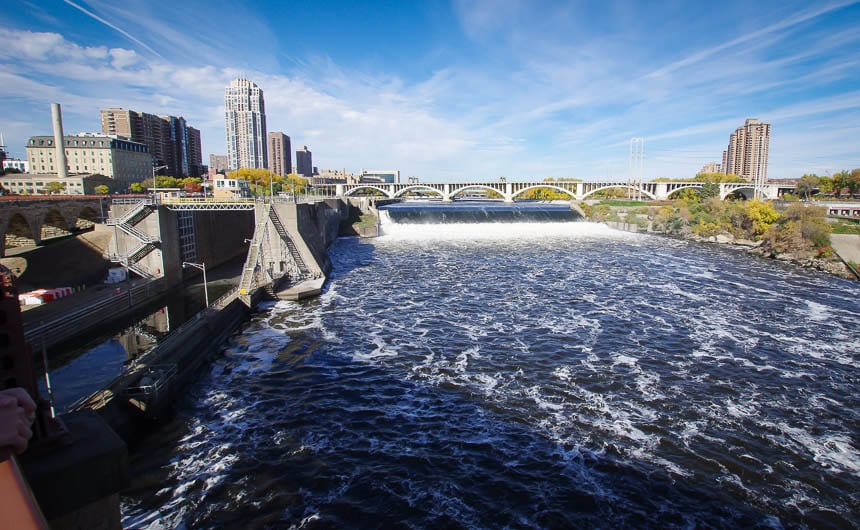 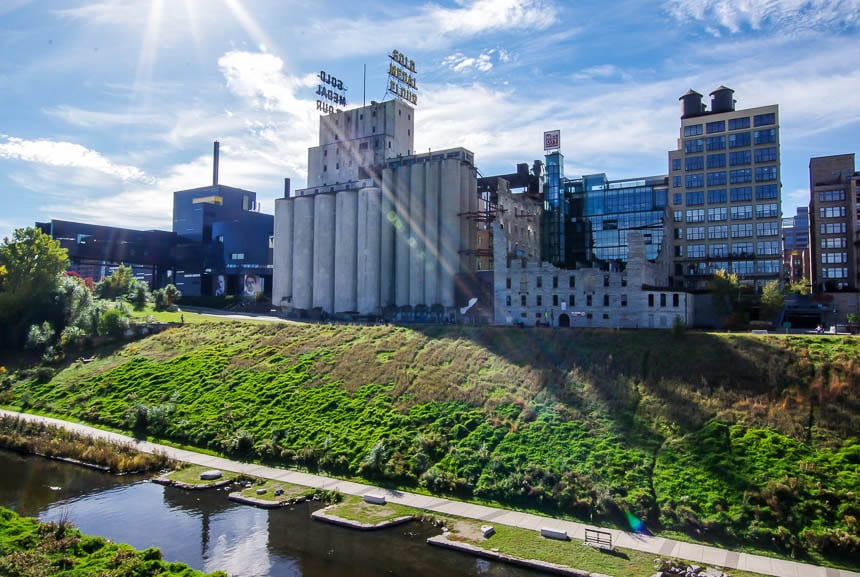 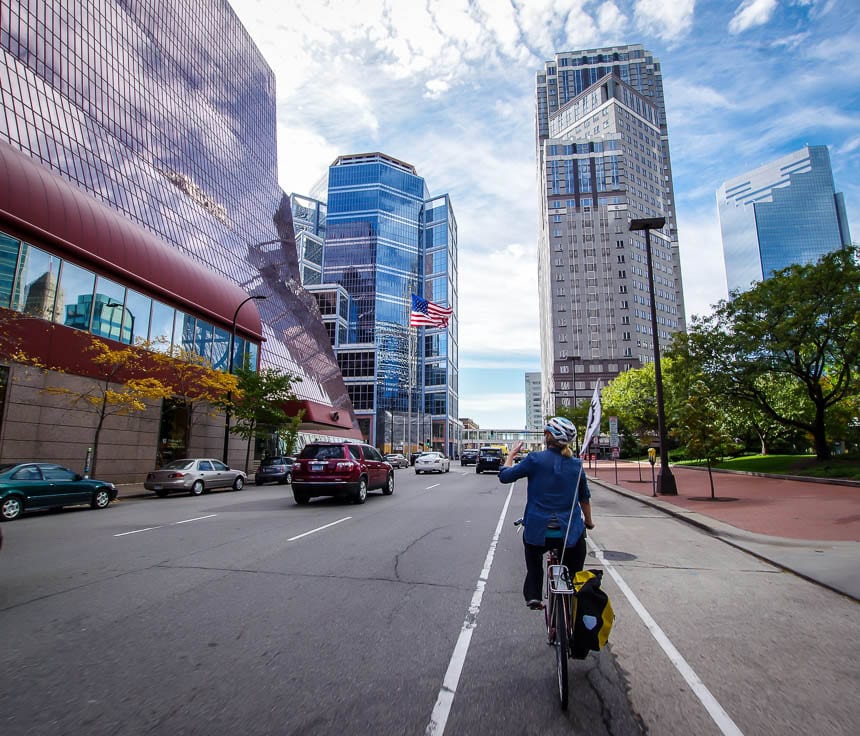 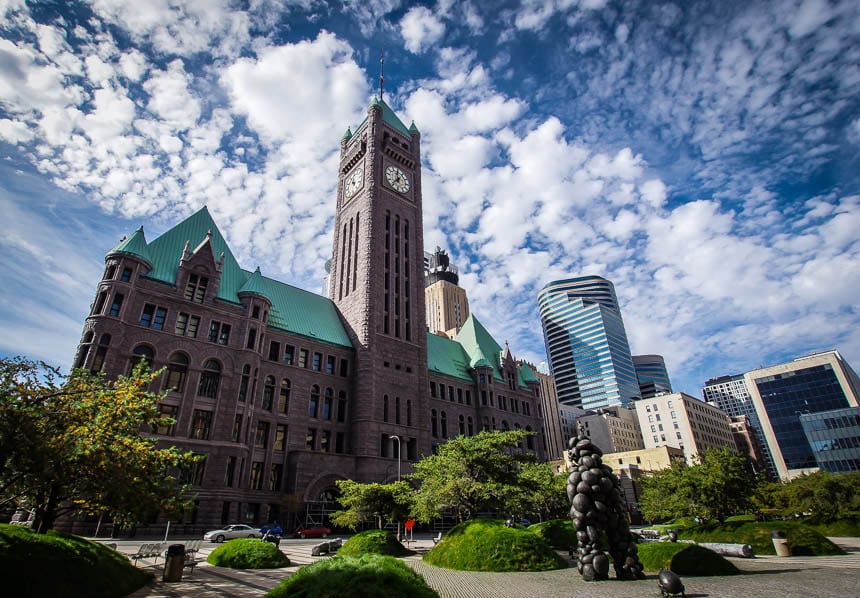 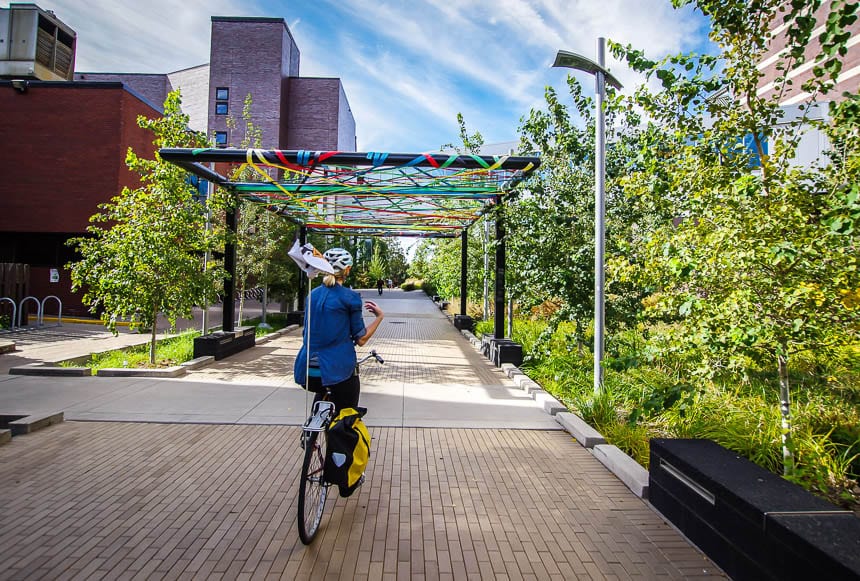 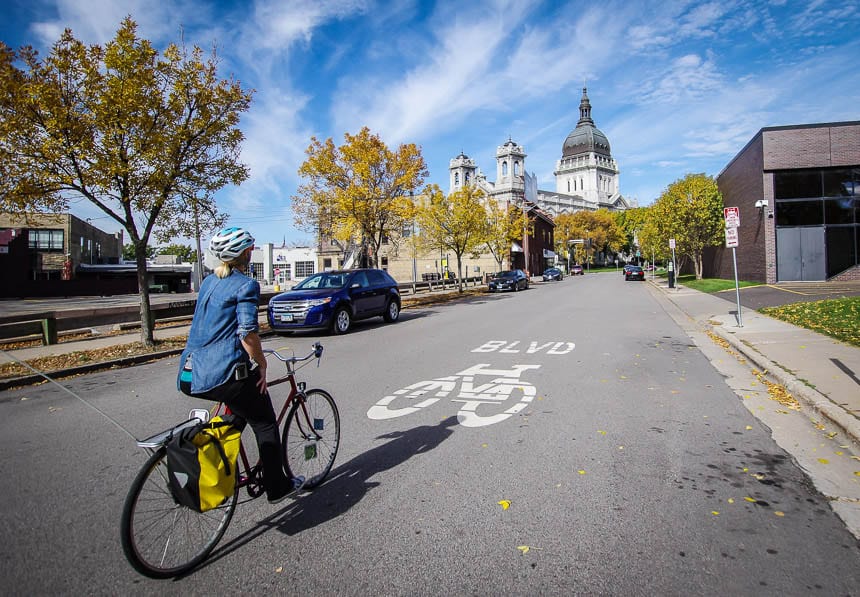 Love how well marked the bike friendly streets are

My ride with David was fun. In one hour we covered about 18 miles. That gave us enough time to ride around one of the lakes (without hitting any pedestrians) and cycle a small section of the Midtown Greenway. There wasn’t time to snap photos but the lasting impression I came away with was how accessible from my downtown hotel the green space is. Of note is the fact that Le Meridien Chambers offers bikes to their guests. Take advantage of them! 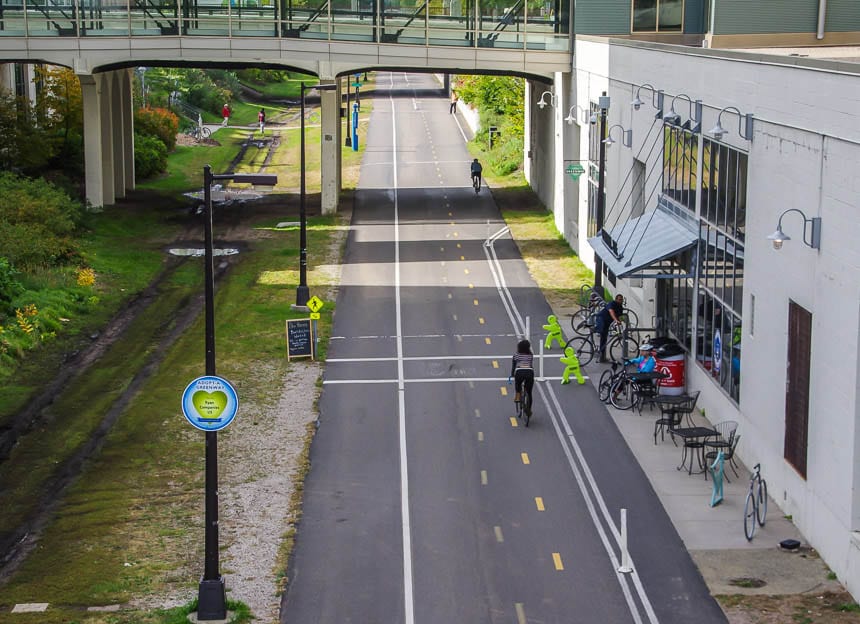 If you need to rent a bike in Saint Paul or Minneapolis check out Nice Ride, a bike sharing system available where there’s a lot of bike traffic. The bikes are all three speed. 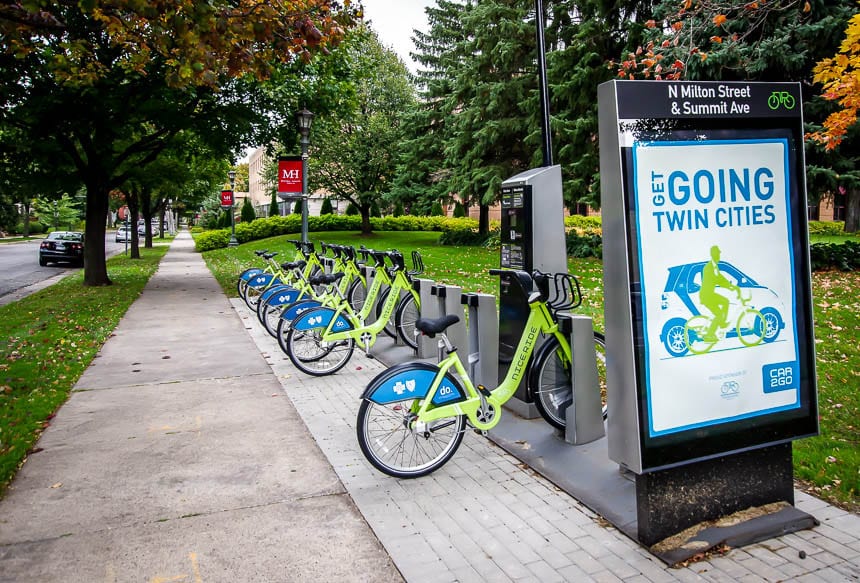 Thank you to Explore Minnesota for hosting me on this trip and to Freewheel Bike Centre for the use of a rental bike. 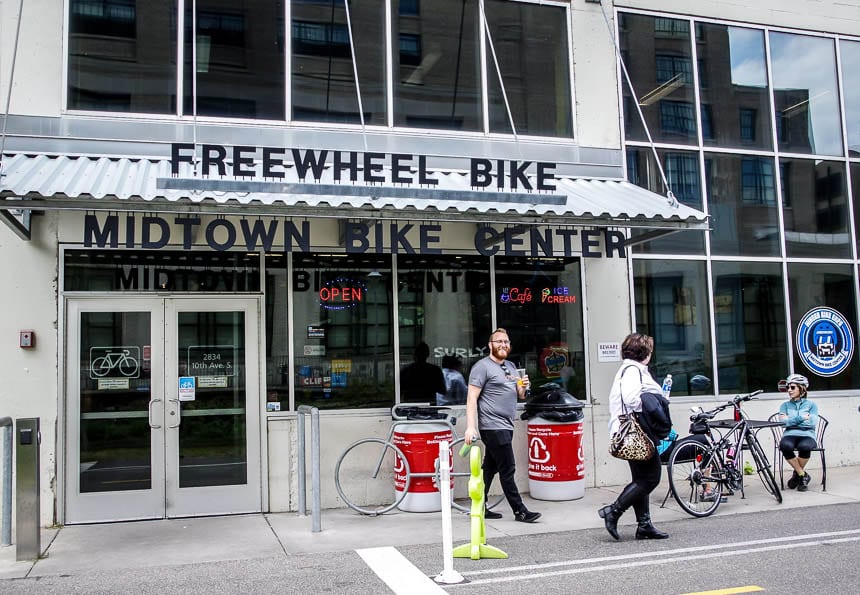 If you want to bike in Minnesota read these posts:

Biking the ‘Road to Nepal’ in South Calgary

Cycling in Peterborough, Ontario Over 3 Days

"Drumlins" explains Kieran Andrews, one of our two guides from Wild Rock Outfitters, are "400 -…

10 of the Best Outdoor Winter Activities in Alberta

With snow finally making an appearance, November is the time to get pumped for winter…