I’m excited and also a little nervous. For the first time in my life I, along with 11 others on a Saguenay – Lac Saint-Jean press trip, are going to be the entertainment for a pack of five wolves. It sounds unusual but once you’ve read the backend of the story you’ll understand why. And as it turns out – it’s one of the most uplifting experiences of my life.

The wolves we play with are owned by Gilles Granal – an imposing, muscular looking man who looks right at home with his wolves. He is the founder of Parc Mahikan, a wolf observation centre located just outside of Girardville – about 75 kms north of Roberval.

In total Granal has 44 wolves but he started with just five of them 12 years ago. The first ones obtained from a zoo turned out to be stressed, even though he got them as pups. He later learned that if pups are taken from the mother too late, it’s not good. Of the original five wolves, two are still around – and now behave like wild wolves should – largely because they have a huge tract of fenced Boreal forest that gives them enough room to get “lost.”

The five wolves we play with were bottle fed and imprinted on people. Initially the five pups lived close to Granal’s house but with expansion they were moved further away to a larger enclosure. It didn’t take long for him to notice that these five wolves missed the human contact. And that’s what got him thinking about providing stimulation for the wolves. As Granal says “we are now the entertainment and the activity that will stimulate his wolves.“

Despite the fact that he is booked solidly more than six months out, guests are told beforehand that he will decide on the day of the visit if it’s a good day to enter the wolf enclosure. He reads the mood of the wolves to make that call. Fortunately we were there on a good day!

The wolf experience at Parc Mahikan goes like this.

Granal enters the enclosure alone. After spending some time with the wolves he then decides if it’s a go. If it is then all of you squeeze through two sets of locked gates. Then everyone lines up with their backs along the fence for a meet and greet session with the wolves.

This is the part that is a little scary – but just at first. A 200 pound wolf will quite happily jump on you – just like a dog – but it’s a little unnerving especially when you stare into a mouthful of sharp teeth at throat level though it’s thrilling at the same time. We’re told we can grab their paws and lower them to the ground which we do a number of times. We get sniffed and licked; our clothes – particularly anything loose like a zipper pull or a mitt gets chewed. (To be on the safe side wear clothes you don’t mind getting ripped.) We are advised not to pull out phones or cameras for the first 10 minutes. The idea is for the wolves to get used to us. If you do, it’s at your peril. One woman had her iphone taken away by a wolf, never to be returned. Anything with fleece or fur is highly desirable and the wolves will have great fun if they can get hold of it. You’ve been warned.

Then we head out around the enclosure to a more open area. The wolves do wind sprints – running after each other – and keeping the pack in order. They come back to check us out – sometime in pairs, often alone. It’s really interesting to watch the pack in action. The longer you stay with the wolves the more you see of the pecking order. If you’re at the bottom of the pack, a lot of time is spent on the outside looking in, or you’re busy running away from the alpha wolves with your tail between your legs. There can be a lot of growling – again unnerving at first.

The bulk of the next hour is spent taking pictures, cuddling with wolves, giving them back rubs and even tummy rubs…for in short order they flop over into the submissive position.

Our hour or so in the wolf enclosure flies by. But it’s cold so we’re ready for warmth – and to get organized for the night for our plan is to “sleep with the wolves.”

Sleeping with wolves in Parc Mahikan

Imagine falling asleep to the howling of a wolf pack. As I lay on my bed on a second floor loft in a cozy cabin, just 50 feet from the wolf enclosure, I listen to what sounds like a symphony – with long howls interspersed with short yips and yaps, crescendos interspersed with brief periods of quiet before the whole orchestra starts up again.

It lasts for about five minutes – not once but on three different occasions through the night.

Listening to the wolves howl is reason enough to spend the night. But the accommodations – though simple and rustic – speak to the outdoor adventurer in me. They sure beat a tent.

For about $150 a night you can choose the cabin I had or a larger one with big windows – looking right at another section of the wolf enclosure. A third choice is a blue Mongolian yurt and the fourth, a solid looking stand-up canvas tent.

Firewood is provided and in some there are propane stoves. Although there are outhouses, you do have the option of indoor plumbing and even hot showers in the main building. There’s a sauna onsite as well.

The food, prepared by Granal’s wife is superb. At lunch we start with freshly baked bannock and a delicious bowl of succotash – full of beans, corn and bacon. Next is a piece of maple and orange baked salmon followed by a blueberry cake. And that was just lunch. Dinner was equally good and breakfast though simple offered all the basics including excellent coffee.

If this is the sort of nature experience that speaks to you, then check out Granal’s website – Adventureaid. It’s in French but there is a Google translate option. The wolf experience is a very reasonable $50 per person.

I have never had an encounter quite like this one. It’s a moving experience where you feel a real connection to the animals. I highly recommend it and spending the night in the park. Considering it’s February and Granal is booked through to October, I suggest planning well in advance. And cross your fingers you visit on a day when the wolves are looking for engagement. 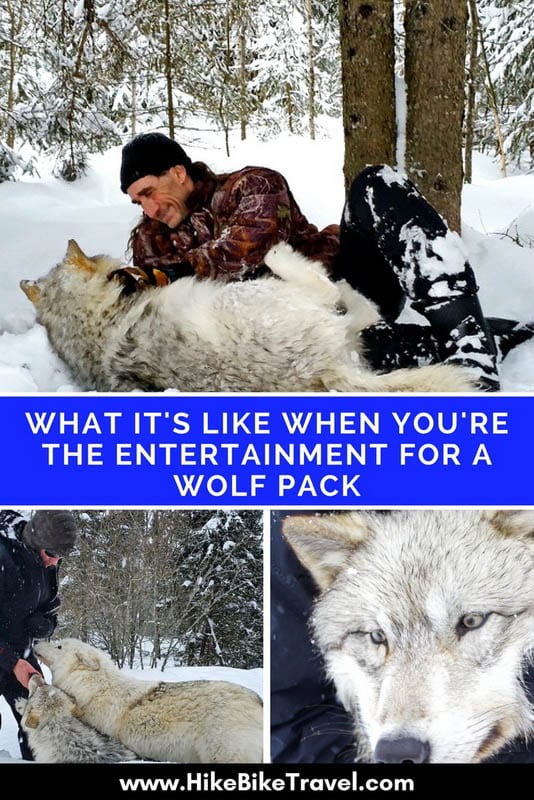 10 of the Best Things to do in Quebec in Winter

12 Photos to Inspire a Trip to the Magdalen Islands

This weeks 12 photos, compliments of former CBC cameraman Gustave Pellerin, take you on a…