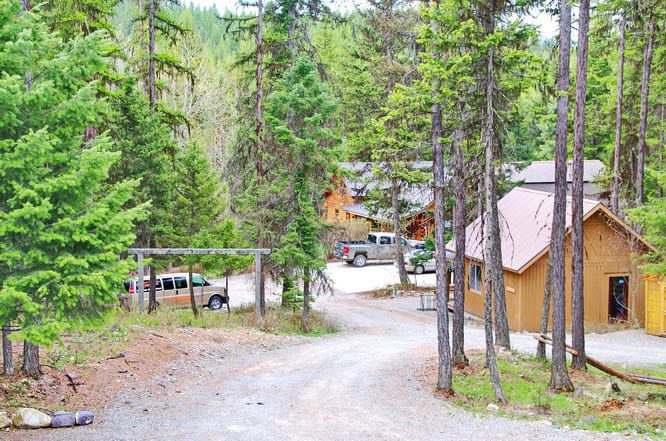 On a trip to Whitefish, Montana, I felt the pull of mountain biking for the first time in a while. I think it was the infectious enthusiasm of our host for the weekend – Cricket Butler.

She was kind enough to put John and I up in the Whitefish Bike Retreat, her amazing trail-side lodge, located just 15 minutes outside of Whitefish. Although we had really come to cycle the Going to the Sun Road in Glacier National Park, the more I heard and saw of the Whitefish Trail, the more convinced I was that I could actually ride it and have a good time doing it.

I do have to face the fact though that I am a terrible mountain biker – mostly because I’m afraid of going too fast. And yet according to Julie Furtado – an American winner of many world cup mountain biking races – The secret to mountain biking is pretty simple. The slower you go the more likely it is you’ll crash. Maybe I should listen to her.

But it’s Cricket and her retreat I really want to tell you about.

How a divorced mother of two ended up in Whitefish

Cricket, the divorced mother of two boys needed to do reinvent herself post-divorce. She was thinking of a hostel but then saw the property where her retreat is now located. What sold her on it was the squeal of mountain bike breaks just yards from the property line.

As an ultra-endurance bike racer, that sound was music to her ears. She didn’t know how she could afford it but she knew then this was the place. In no time she had the barn on the property renovated – and turned into the bunkhouse that it is today. As of 2019 she has been open for seven years.

Cricket is truly an inspirational woman. She has raced the Tour Divide, a 2,800 mile self-supported bike race that starts in Banff National Park and ends in Antelope Wells, New Mexico, three times.

She’s also done La Ruta in Costa Rica – the toughest mountain bike race on the planet. And before Cheryl Strayed became famous with her book about a partial hike of the Pacific Coast Trail, she hiked the whole thing as well as the Appalachian Trail.

If that weren’t enough, she has canoed the Yukon River from Whitehorse to the Arctic Ocean and in fact she and her friend were considered the team to beat in the Yukon River Quest a number of years ago. This is just some of Crickets’ life I was privy to in a 15 minute interview. I’m sure the list goes on.

Whitefish Bike Retreat – what you get

Look for an assortment of rooms to accommodate 17 people in 15 beds. There are all sorts of room configurations from queen rooms, to bunk beds and single beds to a dormitory with four beds. None have private baths.

There is a private washroom on the floor with the bedrooms as well as a men’s and women’s shower/toilet area. In summer there will be eight campsites to accommodate an additional 32 people. (The only thing I would have liked in our room is a his and hers bedside reading light.)

The bike theme is used throughout the retreat

Bikes are used as banisters, bike wheels with spokes as magazine holders, cranks as toilet paper holders, chains as the numbers for the room, bike parts for hooks.

The floors are either concrete or wood – and all can be walked upon with bike cleats. The washroom door design is brilliant – stalls look like they are made from a corrugated tin roof. The details are everywhere.

What else can you do at the retreat?

Behind the bunkhouse you can enjoy a bonfire and conversation with fellow guests. Or hop on your bike and do a course through the trees. Or test your balance on a line strung up between a couple of trees…. This place is truly a haven for mountain bikers and adventurers. But you don’t have to bike to stay here.

The Whitefish Trail behind the retreat is fantastic for hiking as well. And it’s equally great as a spot to just hang out. Cricket told me one elderly couple in their 80’s showed up on her doorstep looking for a place to spend the night and ended up spending eight nights.

The retreat really does have universal appeal. And you can bring your dog for a nominal charge. (They should be well behaved and able to get along with her dogs – Lego and Shot).

The Whitefish Bike Retreat is open year round. In winter you can ski and snowshoe. Fat tire bike trails are in the works – and there will be fat tire bike rentals. (There are mountain bike rentals available already.)

Cricket has done a brilliant job with the retreat. For any of you who love to bike – especially mountain bike, you will be in heaven. Look for great hospitality and loads of local knowledge. Beginning in May, fresh coffee and baked goods will also be served every morning.,

You’ll find the retreat about five minutes off the highway via a dirt road, eight miles west of Whitefish. Prices start at $45 per person for a bunk to $95 for a queen room. It’s amazing value for all that she offers.

A Romantic Getaway Near Calgary: The Crossing

For a romantic getaway near Calgary, plan a visit to The Crossing at Ghost River.…