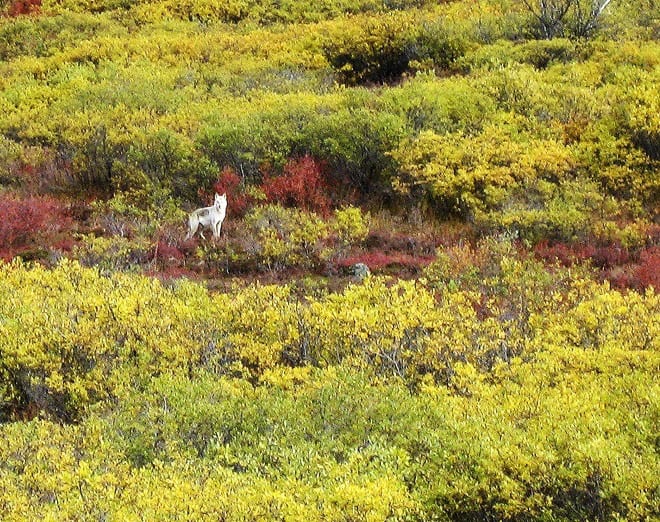 I live just outside Denali National Park, in Alaska, and of all the many things I can say about such an incredible and complicated place, this is one: it’s wolf country.

I have seen many wolves in the wild since I moved to the area 8 years ago, including, most dramatically, a wolf pair splitting a caribou herd to pick off a calf and a wolf father feeding pups from a carcass with its mouth, both off the famed Denali Park Road.

Even in my own humbler backyard tundra, I see wolf prints on the trail behind our place every month of the year, imprinted in mud, post-holed in snow. Despite all this lupine Alaskan drama though, my first wolf sighting, in Western Montana, remains the most potent in my wilderness psyche.

Glacier National Park. October. I was maybe 24, a few years in to my trail crew career, falling head over heels with wildness in any form.

Updated October 2019. This post includes some affiliate links. If you make a purchase via one of these links, I may receive a small commission at no extra cost to you.

Wolves in the Wild in Glacier National Park, Montana

Driving south down the road after dinner at the Northern Lights Saloon in Polebridge, my partner and I were headed back home to West Glacier, fall’s stiff dark enveloping the truck.

We’d had a few beers, a big dinner, and I leaned my head back against the seat in the drowse between wake and sleep, listening to soft pedal-steel on the radio, washboard ruts vibrating my thighs. The truck lurched as Gabe tapped his foot on the brake and stuck his arm out in front of me, an instinctive gesture.

“Look,” he whispered, “wolf.” I opened my eyes. Gabe turned the wheel slightly, casting headlights toward the shoulder. Twenty feet ahead, it stood just off the road in profile, as still as if zapped in midstride.

Even if I hadn’t known anything about how large wolves are, how long their snouts, their legs, I think I would have known. The world seemed to close in around the edges of my perception until it was only me and the wolf, our eyes locked, some ancient knowledge passing—stop. Did I think this? Please. That wolf cared nothing for ancient knowledge, and in any case, I had little of it to give.

To the wolf, I was neither augur nor soul mate, only an obstacle in the terrain, an odd creature that inched close. Its eyes were distinct, its gaze forward. We sat that way for a minute, probably less. The wolf walked, slow, out of the beam of our lights and along the length of the passenger side of the truck, five, eight feet away. Gabe switched off the lights. My window was rolled down a third. It was too dark to see well but I could hear it outside the window.

The awe of seeing wolves in the wild

The night’s noise went on around us, I’m sure, the squeak of a far-off rusted fence gate, a wind chime clattering in the eaves of an abandoned barn, but I remember those moments as if the world were muted, as if the wolf and I were the only things passing before a set stage. No Gabe. No truck.

When it reached the tailgate, the wolf cut across the road and trotted down into the ditch line and up again, vanished into the woods between the river and us. Gabe and I sat in the truck in the dark. No talk. No touch. For a minute, just dark.

The most memorable animal sightings

Of all the animals I’ve seen over the years, the brief glimpses and long stares, I remember that wolf more clearly than many. Every Alaska wolf I see is still refracted by this first interaction, and the impressions I recall.

Not so much the motions of it, not where the wolf walked and how long it took and what I thought when it disappeared. But its eyes reflecting light, how the shoulder muscles undulated beneath the thick beginnings of its winter coat. I remember that it didn’t run. It never seemed wary, or curious. Not canny, smart, devious, or fierce. We crossed its path and it regarded us briefly before making its way toward pups in a den, a deer kill buried in a hole, or miles more hungry walking under the slim moon.

That night, whether because of culture or nature, my wishful tilt toward wildness or an evolutionary hunch, I felt the borders of physicality and transcendence shift until one allowed the other in, and when the wolf slipped into the woods, I wanted to follow it. I wanted to dip my face to the river to drink, tear flesh with my teeth, flatten myself a bed of needles with a circling pace before sleeping. Never mind the blood on my face. Never mind the cold.

This is a guest post by Christine Byl, author of Dirt Work: An Education in the Woods.

Have you seen a wolves in the wild? If so where – and how did it make you feel?

An Alaska train trip is a superb way of getting around the state, especially as…