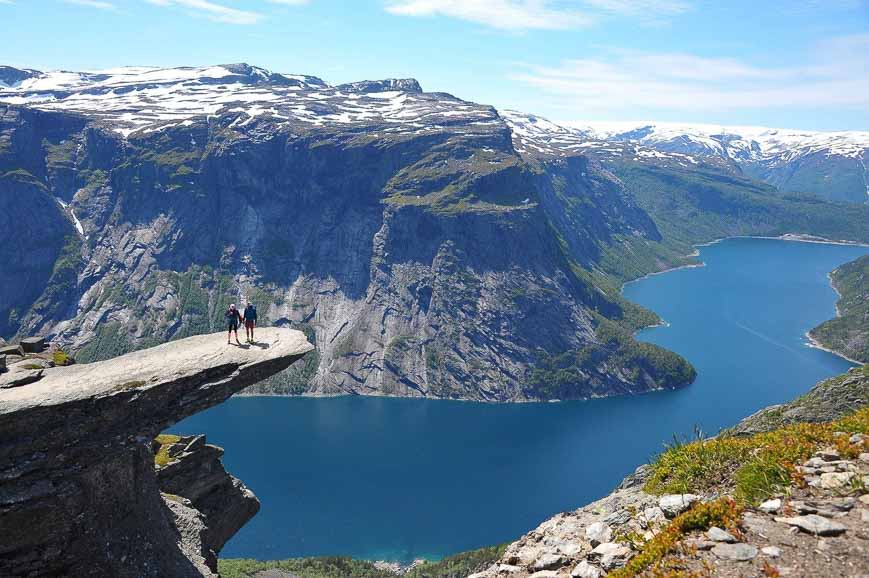 Attractions in Norway for the First Time Visitor

Below are suggestions for a few days in Oslo before you head to the fjords of Western Norway – one of the top attractions in Norway. And if you enjoy hiking (which I think you do, since you’re reading Leigh’s fabulous blog), I’ll add in a few outdoorsy faves along the way.

Begin your journey with a couple of days in Norway’s capital. I recommend getting a ticket on the hop-on, hop-off old sailing ship that plies Oslo harbour, stopping at City Hall, the Opera House and the Bygdøy Peninsula. Set aside at least half a day at Bygdøy – for the beautiful beaches, nature walks and all the little museums dedicated to the country’s long maritime history.

Did you know Norway is one of the world’s largest shipping nations? Not bad for a country of barelyfive million souls.

At Bygdøy, you’ll find the Kon-Tiki Museum, showcasing some of the precarious vessels used by adventurer Thor Heyerdahl to cross the world’s oceans, including the Kon-Tiki, the raft he sailed from Peru to Polynesia in 1947.

The chronicle of that intrepid journey won Oscar for best documentary in 1951. Across the street, the sturdy polar ship Fram is housed in a purpose-built museum. You can’t miss it. Fram was used by several explorers from the golden era of polar exploration in the early days of the 20th century.

Explorer and humanitarian (and Nobel Peace Prize winner) Fridtjof Nansen sailed Fram in the Arctic and Roald Amundsen sailed her in the Antarctic, when he won the race to became the first to reach the South Pole.

You can wander around the deck of Fram, and pretend you’ve time-traveled to 1911 and are about to discover the unexplored polar regions of the world yourself.

A bit further along is the Viking Ship Museum, where you’ll be taken further back in history. The museum houses three excavated ships, two of them incredibly well-preserved, as well as numerous artefacts found on board the ships.

Just imagine rowing/sailing across the Atlantic in one of these. They must have been so happy to see the shores of Newfoundland.

There’s heaps more to see and do in Oslo, of course. But I expect you have limited time, so I’ll give just two more suggestions; both are free.

The first is the Opera House, rivaling that of Sydney in my opinion, with the white marble roof sloping gradually into the waters of the Oslo fjord. There always seems to be people taking a stroll on the roof, so join them.

The second is Gustav Vigeland’s 212 life-sized nudes in Frogner Park. This evocative sculpture park shows human life in all its stages, from before birth to death. You’ll meet locals walking their dogs, having after-work beers, sunbathing, skateboarding and climbing on the statues (though that’s mostly kids).

Head west to see the most beautiful places in Norway

But we were going west, weren’t we?

This is where you hop on the train for one of the world’s most famously beautiful rail journeys: the Bergen line. The journey takes 6 – 7 hours, but if you have a few extra days, and you’re here between mid-July and mid-September, I’d recommend getting off at Haugastøl or Finse, hire a mountain bike and ride along Rallarvegen, the Rallar Road.

The Bergen line was very difficult to build: months and months of snow and freezing temperatures, and much of it had to be bored through solid rock. Rallar was the name of the navvieswho built the railway at the turn of the last century.

Bike on down to fjord level – to the sweet little village Flåm. It’s possible (and recommended) to spend a night in Flåm, to enjoy the views of  Aurlandsfjord, the long white night, the silence of nature and the excellent local kitchen.

The quaint Flåm railway will take you back up the mountain, where you can get back on the Bergen train. Or you can opt for the sea route from Flåm to Bergen.

Bergen is worth a long stay. Norway’s second largest city is on the North Sea and is surrounded by seven mountains. It goes without saying that sporting opportunities abound, on land and at sea.

In the city, there are numerous museums and all kinds of attractions, most famously Bryggen (the harbour).

Bergen was part of the Hanseatic League (a 13th – 17th century merchant guild) and the Hansa architecture has been very well preserved. I love ambling about in the quirky and curious corners of Bryggen and have lunch outdoors at the lively fish market. 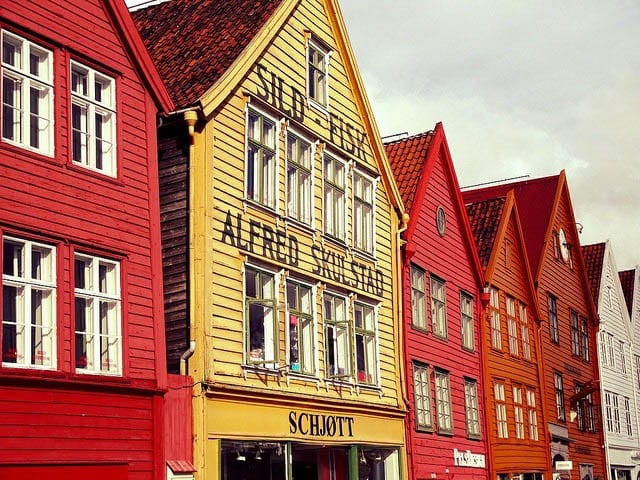 Bergen is also the gateway to the fjords. Geirangerfjord is about a 5 – 7 hour drive north of Bergen. Having a car is the most flexible option, but there are buses, trains and planes as well.

Also, Hurtigruten, the coastal express, stops at Geiranger between mid-April and mid-September. Hurtigruten takes cars on board, so it’s possible to enjoy the scenery from the water one way and drive the other.

Heaps to see and do along the way, of course. You could hike in Jotunheimen National Park, trek along the blue ice at Jostedalsbreen, Europe’s largest glacier, or even stop for a few runs at Stryn Summer Ski Centre, where on a warm summer day, people will ski in shorts or even bikinis.

Norway isn’t all sports and nature, of course. Among the many cultural highlights along the way, I’d like to draw your attention to the stave churches. There are 28 left of these 12th century wooden churches scattered around the country. Between Bergen and Geiranger is Urnes, the world’s oldest stave church.

If you’re interested in seeing some seriously spectacular bits of nature, and you’re not averse to a  challenging 8-10 hour hike (return), Trolltunga (the Troll’s Tongue) is about 3 hours south-east of Bergen. See Visit Norway’s site  for practical details.

(PS: I love visiting UNESCO World Heritage sites. If you do too, you’ll be happy to know that this itinerary comprises three of them: Bryggen, the West Norwegian fjords and Urnes Stave Church).

Stavanger is the second largest city on the west coast and Norway’s oil capital. This international city is pretty in its own right; however, the real stunners here lie along the Lysefjord.

Some of the most famous attractions in Norway are Preikestolen (Pulpit Rock) and Kjeragbolten, a round rock wedged in a crevice about 1000 metres above the sea. You have probably seen pictures of both.

Both are accessible by car (or bus in summer) from Stavanger. From the car parks, both hikes take around 4 hours return. The hikes are slightly strenuous; on the other hand, families with young kids do this hike all the time. On the top, you can slowly inch your way out to the edge of the world at Preikestolen – or hop out on the boulder at Kjerag. More information here.

Note: While Sophie didn’t mention it, there is also dogsledding in Norway ; how much fun would that me to do in a country that lovers winter?

This guest post was written by my friend Sophie Redisch, a Norwegian writer and traveler, who blogs at Sophie’s World.

Further reading on places to visit in Europe 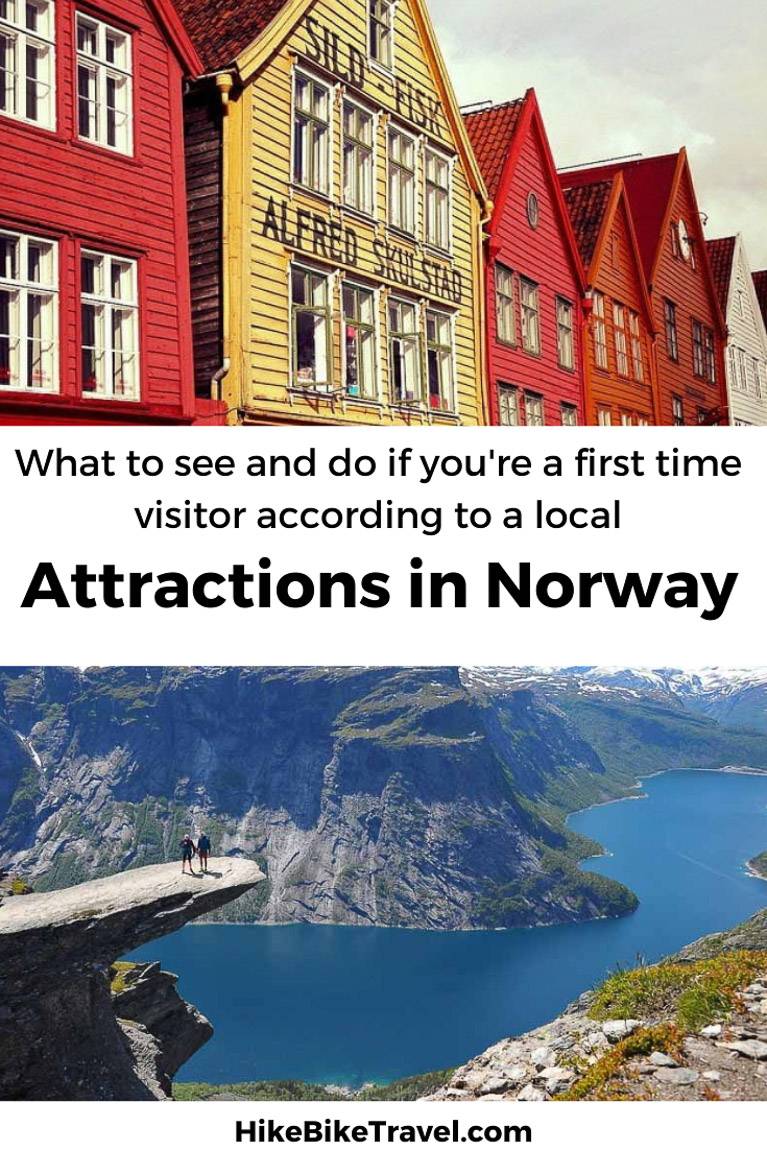