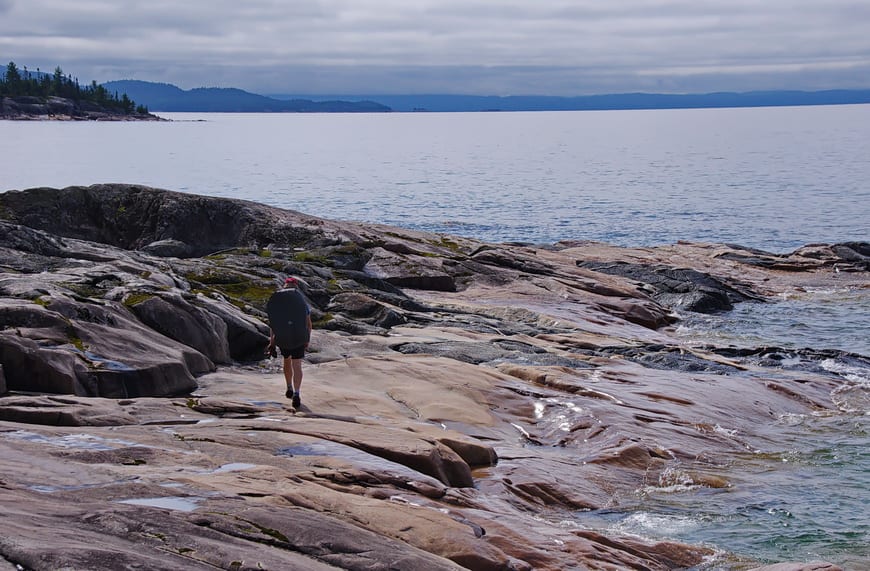 Now that I’ve hiked a major section of the Lake Superior Coastal Trail over a three day period – and not the most difficult section which is the 20 kilometres from Gargantua to Orphan Lake – I concur with her assessment. And I take back my eye rolling.

The Coastal Trail offered a lot of variety. We hopped over massive boulders, scrambled up and down slippery lichen covered rocks, enjoyed phenomenal sections of easy beach walking along with sections of flat rocks alongside Lake Superior.

We heaved ourselves up giant steps via small ledges in the rocks to get off the beach. We ducked our heads to get through cave like sections and at times I had to throw my pack up onto the rock so I wouldn’t lose my balance on an ambitious scramble.

Fortunately at the end of every day there was the prospect of a campsite on the shores of Lake Superior – so a frigid wash-up to remove the day’s salt and sweat was always an option.

Here’s how 3 days on the Lake Superior Coastal Trail unfolded.

At the end of the first day as we lounged on the beach at a truly fabulous campsite overlooking Robertson Cove I felt smug. In four hours we had knocked off 11 kilometres and quite frankly they didn’t seem very hard.

We enjoyed the longest beach walk along with the highest climb on the entire trail – interspersed with some scrambling over bedrock and boulders. The Orphan Lake section had delivered some beautiful views with quick hiking except on the descent. I figured if we really wanted to, we could knock the rest of the Coastal Trail off in one long day.

Was I ever wrong! Over the next couple of days the hike was both physically and mentally tiring. You really had to concentrate on where to put your foot, almost every step of the way.

And then on our first night I was kept awake for hours listening to rain beat our tent while lightening crackled overhead. That meant that the undergrowth the next day would be wet and soak us in short order. What fun!

Day 2 – Robertson Cove to a campsite north of Sinclair Cove (Approximately 16 km and 7 – 7.5 hours of hiking)

After spending an inordinately long time picking my way through slippery massive boulders at the start of the day, I started to wonder if this trail was going to kick my butt. Fortunately once we reached Katherine Cove (another place with road access) the hiking got easier.

In fairly short order we knocked off another three kilometres, putting us at Sand River. Here you actually have to walk along the highway for a short stretch so you can get cross the river.

From Sand River to Barrett River – a distance of 5 km, the hiking is a mix of everything you find on the trail – beach walking, boulder hopping and inland treks over large swaths of outcrop followed usually but steep descents.

There are three campsites along the beach and in hindsight they are the best choices if you’re okay with a very long day on the last day.

A reader let me know that the highway is currently down to one lane at the Barrett River and no pedestrian traffic is allowed across the bridge. Someone else kindly suggested checking out Naturally Superior Adventures on Facebook as they have a video of the river crossing that will answer all questions.

The 5.5 km section from Barrett River to Sinclair Cove is marked by rugged terrain that is often spectacular but trickier and slower going to hike. There are lots of cobble beaches followed by jaunts inland. At the end of the day this feels like it’s being repeated ad nauseum.

Although there were some short sections of easy hiking, most of the day got our full attention. By 5:15 PM when we stopped, I was bagged – and a little disappointed with our campsite.

There was almost no level ground so a tree blocked part of the doorway to my side of the tent. As there had been little clearing done, the woods here were dark. However, there was a nice stream with a pool 50 m away that beat jumping into the very wavy and frigid Lake Superior.

It wasn’t until we reached Sinclair Cove with its big sign that we realized that where we thought we had camped on the second night and the reality of where we camped were two different things. That was a little depressing as it meant at least a few more hours than we had figured on the trail.

It took us a solid hour to do just over a kilometre after leaving our campsite – an indication of just how rugged the terrain is.

At Sinclair Cove you can take a worthwhile short detour to see the pictographs – which we did but we didn’t dare go out on the rock as our boots had no purchase whatsoever and people have drowned here.

After that detour the trail became incredibly interesting, weaving through massive boulders that had actually formed what looked like caves. While interesting it was very slow going. Steps up the rock were huge and on a couple of occasions the only way I could get up was without my pack.

Once you get through this section, its generally easier hiking with plenty of lovely woods walking. You do have to cross the Agawa River – and again it is via the highway. Once you’re back on the trail in the woods, it’s flat and easy walking all the way through to the Visitor Centre.

In hindsight I wish we’d had time to do the Gargantua to Orphan Lake section of the Coastal Trail. It’s supposed to be the prettiest part of the entire trail – even though I thought what we did and saw was fantastic. I HIGHLY recommend backpacking this trail but be prepared!

That means it shouldn’t be the first hike of the season. You should be in reasonable physical shape, pack for the wilderness (even though there are many places where you can bail), carry a good map and the other 10 essentials. Always let someone know your route and your planned finish date.

Hiking in the fall is actually a fabulous time to do it. Even though the mornings start getting colder, you don’t get the bugs and the fall colours make an appearance around mid-September.

Check out Lake Superior Provincial Park website for more information and ideas of where to hike.

As of 2021 you need campsite reservations. These can be booked online up to 5 months before you go through this link.

Figuring out the logistics on this trip can be a challenge. Lake Superior Adventures now offers a shuttle service which makes all the difference. Check out this page for drop-off locations and their pricing.

Some items I’d recommend you take on this trip

You’ll be camping on this hike. Be sure to test out any new equipment beforehand and have a look at your old gear to make sure there aren’t any glaring problems.

Some of the things I’d recommend include the following:

Further reading about the Coastal Trail

Check out my blogs on hiking the Coastal Trail in nearby Pukaskwa National Park to give you a feel of what can go wrong. You might especially like Day 2 on the Coastal Trail in Pukaskwa. In Lake Superior Provincial Park I also recommend the full day hike to see Agawa Falls.

For great maps and detailed information I highly recommend that you visit the Voyageur Trail website. 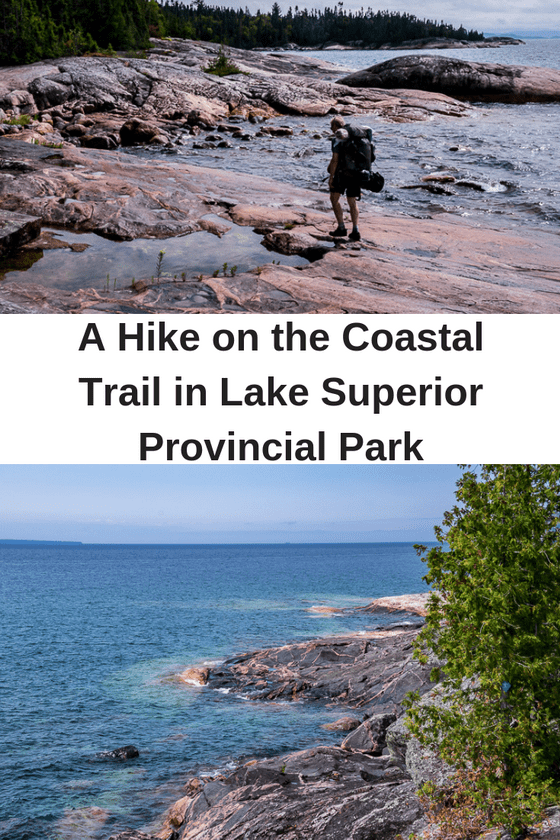 Thank you to Ontario Parks for helping a great deal with this trip and to Ontario Travel for getting me there.