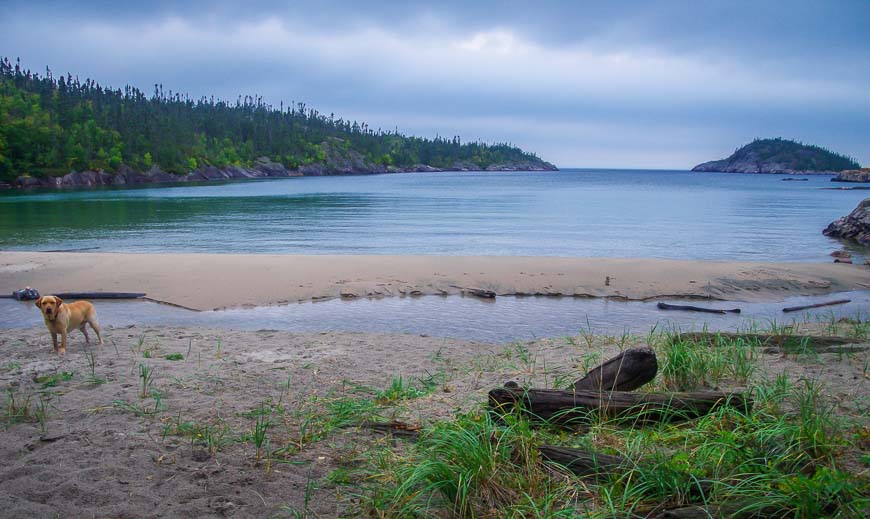 Fisherman's Cove - the site of our 2nd campsite

Yesterday I left you on the trail at 9:30 PM, about a kilometre short of our first campsite on the Coastal Trail in Pukaskwa National Park. That was the first time in decades of backpacking that I have ever backpacked in the dark. At least we ended up right beside the water without breaking anything – and awoke to the view in the photo below.

As a side note we had been told at our backcountry orientation in the park that WE HAD to make the campsite we booked every night unless we had an emergency. We only ended up making our booked campsites on one out of four nights.

But in our defense we saw only ONE other person on the trail in five days once we’d said goodbye to the group from Caledon so we never put anybody out and we never had a day of less than 8.5 hours of hiking.

Just in case of bears

Before calling it a night we had packed all our food into one backpack and dragged it far away from our tents – just in case there were any bears. We hadn’t seen any bear scat during the day so we were feeling pretty comfortable and frankly we were just too tired to do anything else.

If there had been rocks we could have covered the pack with them – just like I’d done on a backpacking trip to Auyuittuq National Park this summer – but surprisingly rocks were few and far between.

Normally – without a pack on – I can knock off 11 km in 2 – 3 hours. That didn’t happen on this trip!! But a decent night’s sleep, a cup of hot coffee and several slices of fresh banana bread at least put us in a positive frame of mind to continue.

We knew ahead of time that most of the day would be in the woods. It’s the one section on the Coastal Trail that I would describe as the least interesting. Still, and especially because it’s fall, there is lots of colour, textures, mushrooms and lichens to liven up the hike.

It didn’t take us long to realize that we made the right decision to stay put for the night on the trail. On the second day the first part of the hike took us over super slippery rocks and then up through a cleft in the rocks that I never would have found in the dark.

Even in the daylight it took us about 90 minutes to reach White Spruce Harbour. It’s a beautiful campsite – like all of them we saw on the trail.

After a lunch stop at White Gravel River – a huge campsite that’s great for large groups – we motored on – though motored might not be the best word to describe our pace.

The trail in the afternoon was tough – though if the rocks had been dry it would have been a snap. They were slick and slippery. Every step required concentration and careful foot placement. Interestingly the Vibram soles on my leather boots didn’t grip the rock but the rubber on my $15 Crocs did a fantastic job. It’s too bad they didn’t offer the support I needed to backpack in them.

An afternoon of walking in the rain

About 2 PM in the afternoon the thunderstorm that had been forecast the day before shook the ground and deluged us with rain.

It didn’t stop us but it did make the going even slower. And it managed to soak our boots. I regret that I hadn’t brought some short gaiters with me.

We didn’t rolled into Fisherman’s Cove until 6 PM. It had been a nine hour day and we were all bagged.

Fortunately the rain stopped before we got to camp. We were able to set up tents without getting anything else wet and cook and eat our spaghetti dinner with a view of Lake Superior.

I’d schlepped a Nalgene bottle full of red wine – so with a view like we had, a glass of wine, a warm tent and a full stomach, life at the moment seemed pretty good.

Little did we know that the next day would be our day from hell – and I thought that had already happened.

For more information on Pukaskwa National Park visit their website. 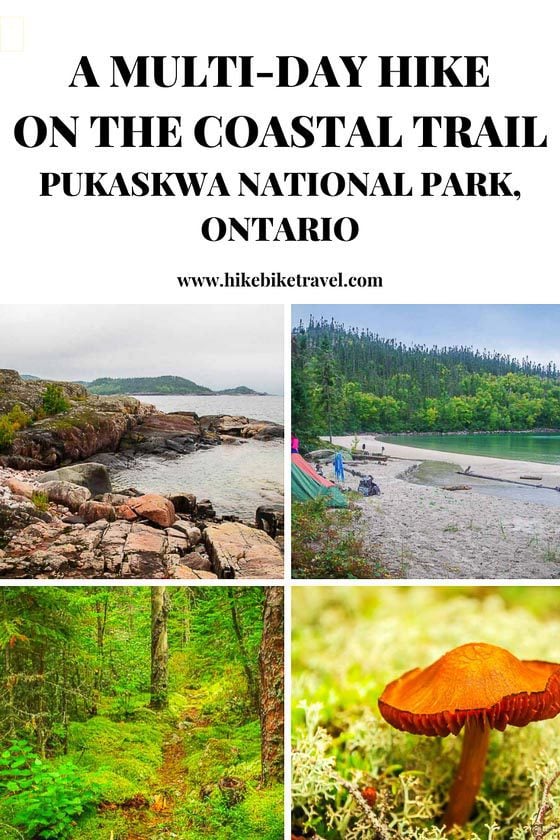