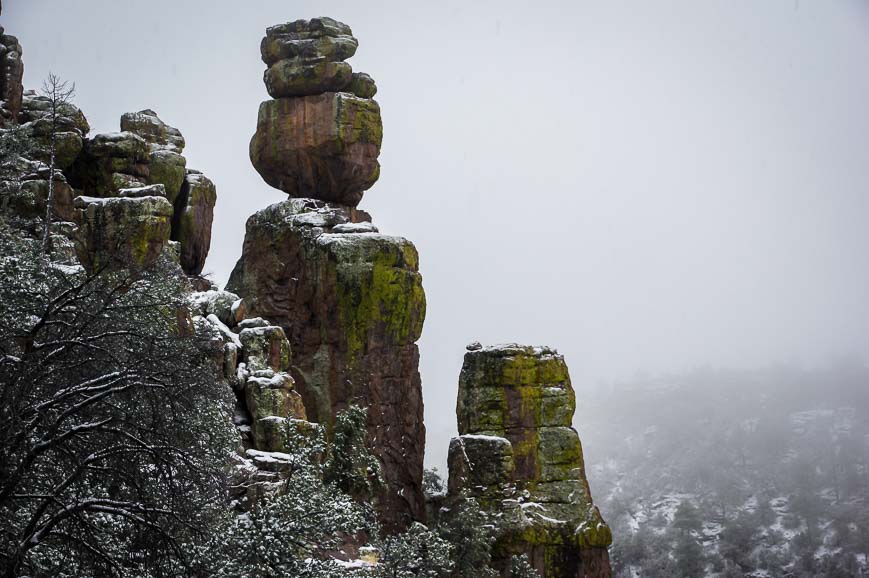 One of the balanced rocks we saw

In southeastern Arizona, about a two hour drive away from Tucson you’ll find the beautiful and somewhat isolated Chiricahua National Monument. Called a sky island – with mountains that rise to a height of 9,763 feet (2,978 m) above the surrounding plains, the area makes a great destination for hikers and birders.

We were there in mid-December  – during a snow storm. So much for getting away from the cold of Calgary! However, it turned out to be a blessing in disguise. The rock pinnacles are particularly beautiful when dressed in snow. Chiricahua National Monument hiking may not be ideal under snowy conditions but the snow keeps people away so we almost had the trails to ourselves.

The only people we met were from out of the country aside from a couple of guys from Chicago who were on a trip and following in the footsteps of author Cormac McCarthy and two girls from California on a spiritual outing (one of whom warned me that parts of California would fall into the ocean the next day. It didn’t happen.)

According to the literature from the monument, the Chiricahua Apache named the pinnacles “standing up rocks.” The grey rock – called rhyolite was formed 27 million years ago after the eruption of the Turkey Creek Volcano. Weathering over the millennia has resulted in a fantastic assortment of rock shapes and spires. The pinnacles are best viewed by hiking though the Bonita Canyon Drive is reportedly very beautiful as well.

Dogs are allowed on a leash on some trails but check on at the Visitor Centre to see which ones when you visit.

A change in plans because of snow

We did have to change our hiking plans because of a road closure. We couldn’t drive past the Visitor Centre because of snow so The Big Loop – that starts at Echo Canyon and takes in the best of the scenery was not in the cards.

Instead we started at the Visitor Center, hiked up the Lower Rhyolite Canyon Trail to the Sarah Deming Trail and from there to Balanced Rock. There was about four inches of snow by the time we got to Balanced Rock – with no sign of letting up – and a cold wind so we turned around here. It was a very beautiful hike with a moderate amount of elevation gain.

Although we did a fraction of the 17 miles of day-use trails in the national monument – I still feel like we got a good sense of the place. However Chiricahua National Mounument is also well-known for birding, and I wish we’d had more luck in that regard.

Do note that there are certain hazards – including heat, rattlesnakes and cacti in the summer and snow and ice in the winter. Snowstorms are most likely to occur from December until March. Thunderstorms tend to be a summer phenomena.

You can make reservations online for camping in the Bonita Canyon Campground, located in a pine and oak forest. Peak season is January 1 – July 6th and again from October 1 – December 31. Sites are available on a six month rolling basis. There are 24 individual campsites and most are shaded.

Good news if you decide to visit Chiricahua National Monument – entrance is free and it’s open year round for both day and overnight visitors. It’s an overlooked part of Arizona but one definitely worth visiting.

Further posts on hiking in Arizona