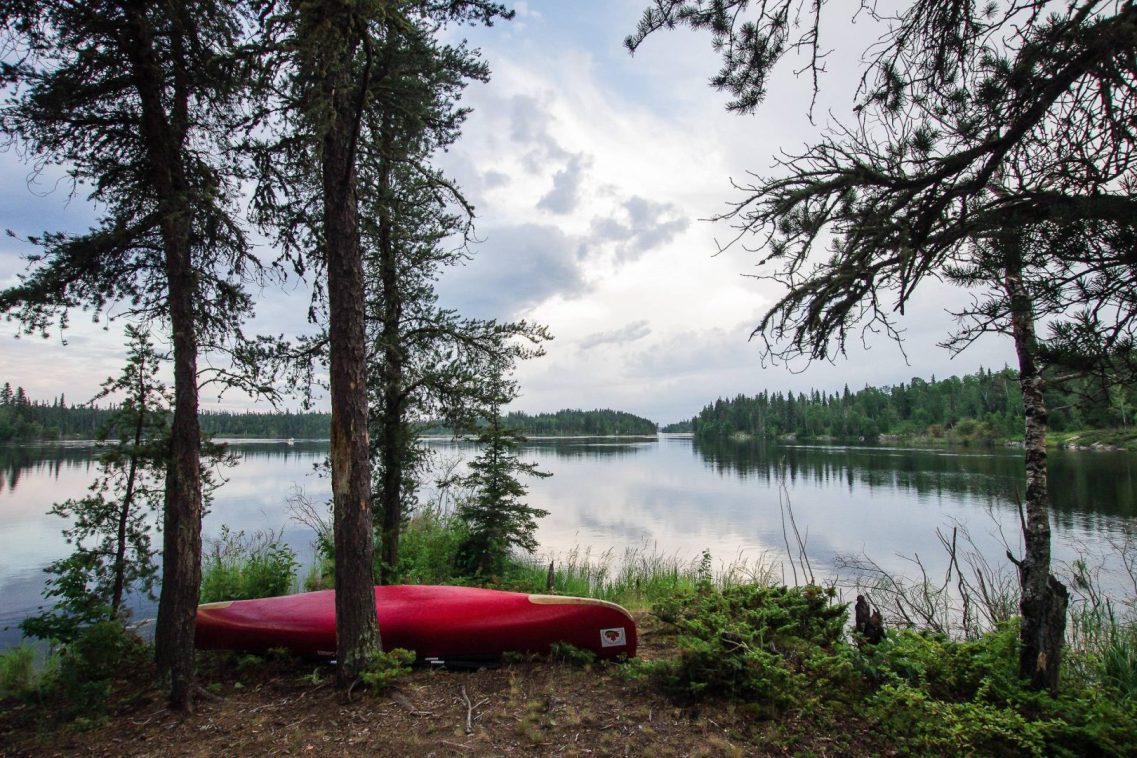 The Churchill River is a classic northern Canadian river to canoe. Starting in Churchill Lake, Saskatchewan, the river flows east for over 1,600 km emptying into Hudson’s Bay. It’s unique in that all the water flowing in the river is Saskatchewan based, with not a drop of mountain water.

The range of canoeing options is phenomenal so your best bet is to pick up a guide book on canoeing the Churchill or even better, get in touch with Ric Driediger of Churchill River Canoe Outfitters and discuss with him what you’d like to do.

That’s exactly what I did – and with limited time – just four days, John and I, on the advice of Ric, elected to fly in to Trout Lake from Missinipe and paddle back to town.

Although someone had forgotten to book our float plane, it turns out that in Missinipe, booking a float plane is akin to hailing a taxi in New York City.

Just call up, tell them when you’d like to fly – and you’re off. It was only a 30 minute flight for us to get dropped off on Trout Lake. I love the overview of the area you get from the air.

We got dropped off about halfway up Trout Lake – and as it turns out right beside the bones of a bear. But other than the bear carcass and a few moose and wolf droppings, there were no other animals to be seen over the four days, not even a squirrel, though the bird life was good.

Our first day turned out to be a mix of paddling and portaging. We didn’t actually travel very far – just 10 km at most. Three portages were required and we only ran one set of rapids. But because we’d hiked 30 km the day before in La Ronge Provincial Park, we were happy to call it a day at a very pretty campsite right beside Rock Trout Rapids.

Our timing was perfect. Breakfast was eaten and the whole campsite packed up when we felt the first drop of rain. It looked nasty so we donned our rain gear and spent the next four hours paddling 19 km.

We had Little Trout Rock Rapids to deal with immediately after leaving camp, followed by Chief Rapids and Chief Lower Rapids about 45 minutes later. All were easy to navigate.

Our luck held as we paddled across Nipew Lake with barely a breath of wind. This section could be tough going in a big wind. The highlight here was a rookery absolutely covered with hundreds of gulls and white pelicans.

We continued on, weaving our way through a maze of islands to reach our campsite. We had read other blogs where people had some navigation issues and ended up paddling many extra kilometres so close attention was paid to the map and our location.

When we rolled into camp we were dripping wet, but in 10 minutes or less we had a tent and a tarp set up. As we were in camp by 1 PM, we had plenty of time to sleep and read which was a real luxury for us.

The rain continued on and off until dinner time. Then, over the next few hours we were treated to an ever changing and very dramatic sky.

Our third day started with an easy 7 km of paddling. After that you have to make a decision on how you want to return to Missinipe. The night before we had discussed and decided that we would opt for the Barker Lake route back to Missinipe.

The other option is a long portage around Great Devil Rapids and Little Devil Rapids to reach Devil Lake. We also didn’t want to camp on Devil Lake because of the noise from a nearby road.

The Barker Lake route still requires a long portage (about 800 m) along the Sluice Channel. The first 100 m or so were very muddy but the rest of the portage was in good shape.

As you’re portaging and listening to the roar of water, you quickly understand why the portage was necessary – especially when you reach Sluice Falls with its giant canoe eating hole.

The portage took us a good 1.5 hours as we had to make two trips. It wasn’t until after lunch that we were back in the canoe again.

After lunch we had five sets of rapids to run. The first four went well – one right after another. But on the last one we didn’t see Dieter’s Rapid – the one we had planned to run until too late and ended up shooting The Shelf.

The first wave hit the canoe and landed us in several inches of water, and the next few waves added a bit more. But we didn’t flip, just limped to shore and started bailing. Ten minutes later we were at our campsite for the night on Barker Island. The campsite was well used – more than I like to see – but it did afford an opportunity to explore because of its size.

We got an early start on our last day as I had in the back of my mind that we might be able to drive all the way home to Calgary if we were out of Missinipe by noon or so – and we did.

There were a few kilometres of easy paddling, followed by three sets of rapids in quick succession. Then a short portage over Staircase Falls put us on Devil Lake.

We paddled to the end of Devil Lake to reach the last portage of the trip – around Otter Rapids. By the time we’d reached them, we felt like we’d entered civilization again. The Otter Bridge can be seen from a distance and you can start to hear vehicle traffic.

We were back in town just three hours after leaving camp. We had perfect conditions with no wind on the last stretch into town. Others are not always so fortunate.

The four days on our Churchill River canoe trip exceeded our expectations and now I want to go back for more.

If you’ve read this far I want to leave you with this.

On our last portage of the trip – the Otter Rapids portage, it hit me that the trails we were following had been used for thousands of years – as long as the native people have lived in the area.

Don’t ask me why it took so long for that fact to hit home – but when it did, I suddenly felt more in touch with all the people who had walked before me.

Useful information before you canoe the Churchill River

Missinipe is a small community located about 90 minutes north of La Ronge, Saskatchewan via a road that is paved for the first 20 km and then is dirt for the next 60 km. It’s passable with a car but beware the large fuel trucks.

You don’t need to take a float plane to paddle the Churchill. In fact you can leave right from the town of Missinipe.

This is major fishing country and the reason most people come to the area. Don’t forget a fishing rod and a fishing license. Once you’re a few portages away from any road, you can count on catching a pickerel for dinner.

The bugs were only an issue in the low lying areas of the portages. Bring a head net and a bug jacket to be on the safe side.

The weather is very changeable so pack for all seasons.

Bring an axe and fire starter.

Canoes, barrels and everything else you need for your trip can be rented from Churchill River Canoe Outfitters in Missinipe.

Go bear prepared but they really aren’t much of an issue. Read before you go – Tips for Staying Safe in Bear Country.

Although this is a wilderness trip, it’s not as out there as some. There are fishing lodges around and float planes fly overhead many times a day.

Further reading on canoeing in Canada

A big thank you to Ric at Churchill River Canoe Outfitters for supplying me with loads of great information as well as all the canoe and all the gear for the four days. Truly, this man is such a resource for the area! 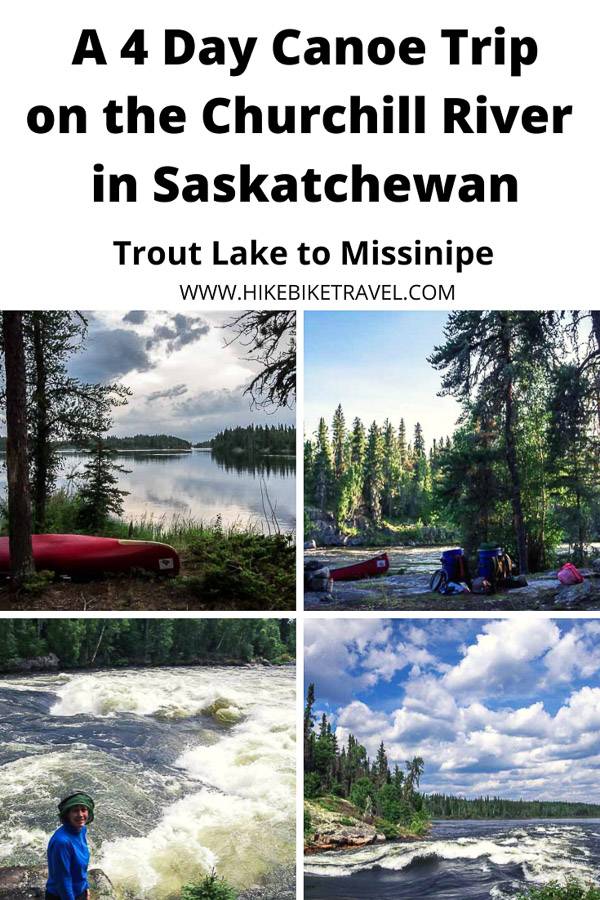