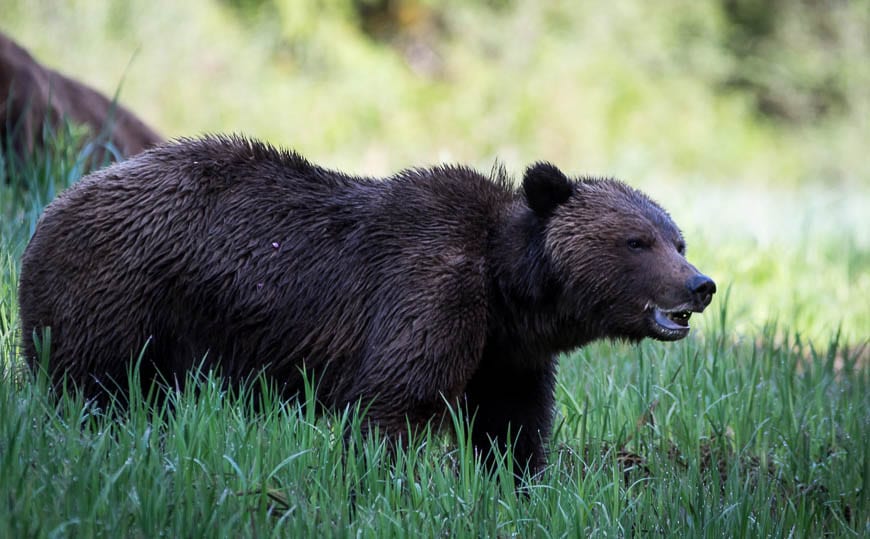 Bear Safety Tips: What you Need to Know

To be comfortable and safe in bear country you need to have a good grasp of bear safety tips. There are a number of things you should know including how to distinguish between black and grizzly bears; what you should do if you encounter a bear and what preventative measures you should and can take.

The following bear safety tips could save your life if you follow them. If you’re in bear country always take a can of bear spray! Equally important – have the bear spray close at hand. It NEEDS to be quickly accessible – via either a holster at the front of your pack or an attachment at shoulder level. I have seen far too many hikers with the cannister swinging away on a carabiner at the back of their packs – or worse inside it.

Time yourself and see how long it takes to reach the bear spray under non-stressful situations. You’ll be a convert to having it close at hand.

The two biggest roadblocks to hiking that I hear about most are lack of hiking companions and bears. I of course want to see everyone out hiking – enjoying nature, reducing stress and generally having a good time. While finding the right hiking companion can be tricky, everyone should know how to stay safe in bear country – wherever that might be.

In western Canada and some parts of the western United States as well as parts of Alaska and northern Canada you can expect to find both black and grizzly bears. In eastern Canada and the eastern US you won’t find grizzlies. This blog doesn’t deal with polar bears as that’s a whole other kettle of fish.

Learn to tell the difference between a black bear and a grizzly bear.

From afar the biggest distinguishing characteristic is the distinct shoulder hump found in the grizzly bear. It is entirely absent in the black bear. Also, the claws of a grizzly are much bigger and can be seen in most grizzly bear tracks. If you see an enormous bear, it’s a grizzly.

Tips on what to do when you see a bear

There are a couple of scenarios. You may see the bear but it doesn’t see you, the bear sees you but you don’t see it (in which case ignorance may be bliss) or you see each other at about the same time. The reality is that most bears take off the minute they see you.

If a bear sees you but doesn’t run away then:

If the bear heads in your direction it may just be curious and trying to figure out what you’re all about. It doesn’t mean they are going to attack but still – follow these bear safety tips.

“Fire the spray when the bear is about 20 feet away, to create a cloud that the bear will run into. And we only suggest spraying for a second or two. You don’t want to empty the whole can in your first shot, as you may need to use it a second time on the bear.”

I have also been told to fire for six seconds at six feet. Personally I would rather shoot a bit of spray and hope like hell the bear turns away.

Please note. Bear spray has a shelf life of between two to three years. Eventually it’s the repellent that goes.

In the VERY rare case that a bear continues towards you or even attacks remember the following.

For both types of bears there are times where you have to fight for your life. In very rare circumstances both grizzly and black bears can become predatory and fighting is the only way to go. That’s a big reason to carry bear spray.

According to a post in Alaska Life, two to five people are killed by bears in North America every year. Although that statistic captures our imagination in the worst way possible, there are more common ways of dying outdoors (hypothermia, falls, snake bites…) that don’t get nearly the press.

We’re all probably hardwired to fear bears, but again common sense, making noise, avoiding areas well-traveled by bears and carrying bear spray will go a long way to avoiding any sort of incident.

How to avoid bears altogether

Short of staying home there is always the possibility that you’ll see a bear or inadvertently cross paths. But for me, despite all the hiking and biking I’ve done in bear country, it is a rarity that I see a bear. Your chances of seeing bears will decrease if you make a lot of noise – and by noise I mean using your voice – where you vary the tone and volume. Ditch the bear bells people. They won’t help you, their noise will drive you nuts and they may even give you a false sense of confidence.

Avoid avalanche slopes as bears like to hang out there. Hike between late morning and early afternoon when bears aren’t as active. If you see a steaming pile of bear scat or some young cubs then make heaps of noise and leave the area as fast as you can.

There are a few rogue bears that give all bears a bad name. Most bears do not have any desire to engage with humans unless they or their cubs are threatened. If you stay bear aware on a hike, the odds are overwhelmingly in your favour that you will be just fine. Now go find yourself some great hiking companions, perhaps through a local club or university outdoor program, and plan a hike you’ve always wanted to do.

If you looking for a reason never to hike in bear country then look no further than the book, The Bear’s Embrace by Patricia Van Tighem It’s a thoughtful and very well-written book about her attack by a grizzly bear.

The best bear deterrent is a can of bear spray that is at most three years old. You’ll find bear spray in camping and outdoor type stores. Know how to use it and keep it accessible. You must be 18 years of age to purchase it. Keep your bear spray out of reach of children.

If you’re camping in bear country keep your tent scent free and your food put away, either by hanging it off a pole or tree or by using a bear cannister like this one.

Be careful with bear spray

In the last year I know of four incidents with bear spray between my husband and myself and a couple of friends, including a friend who knocked the safety off and sprayed herself in the eye. Next up was a shower and a trip to emergency!

Be sure the safety latch is on. It should be held by a short cable tie so you never lose it. If the bear safety latch is not on, you need to do something about it quickly. If it ever went off in a car, tent or other confined place, you could have an emergency on your hands. 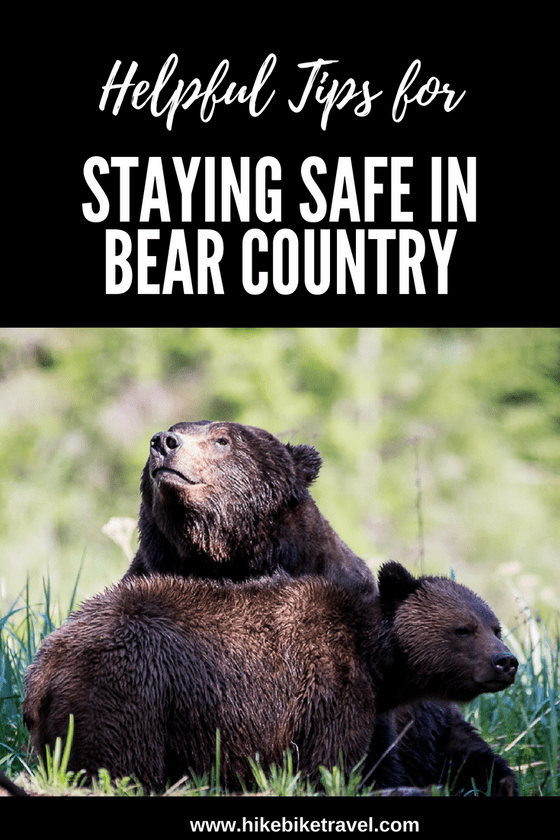