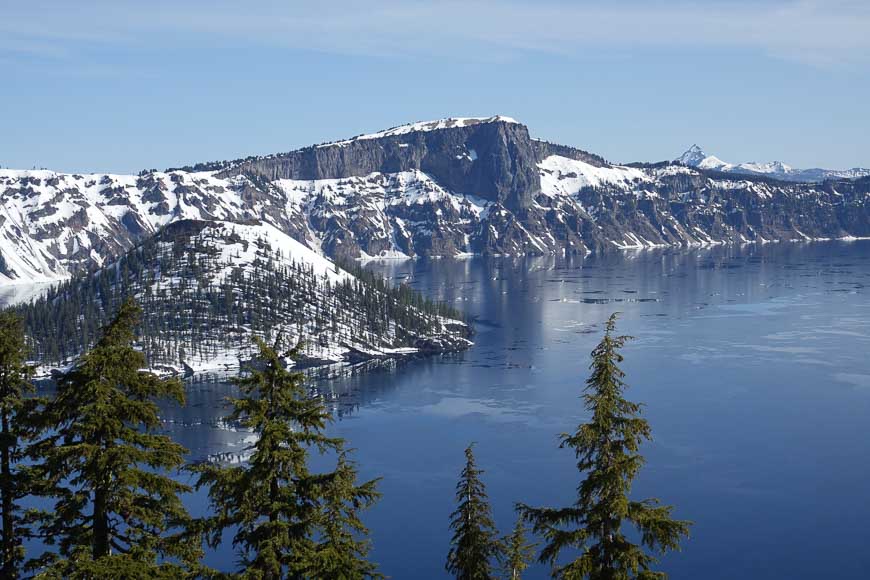 Most people I met while flying on WestJet’s inaugural flight from Calgary to Portland April 29, 2019 were eager to explore the city’s hip culture and culinary scene but I was headed south to Klamath Falls, Oregon a few kilometres north of the California border, for outdoor adventure and wildlife viewing.

Described below are 9 reasons to visit Klamath Falls – with a big focus on nature and the outdoors.

President Theodore Roosevelt liked the Klamath Falls area so much he established the U.S.’s first waterfowl wildlife refuge at Lower Klamath National Wildlife Refuge in 1908. Check on water levels before you visit because if the water is low so will be the number of wildlife species in the area.

Thanks to a wet winter the water level was high when I visited and I felt like I was sitting in a Disney movie full of beautiful animals and birds. Following the 16-kilometre self-guided auto tour, I had to slow for blackbirds flying in flocks so thick they looked like clouds of mosquitoes.

A golden eagle swooped low over the long grass while a ruddy duck with a turquoise-blue beak strutted back and forth looking for a mate. Thousands of ducks covered the wetlands, the cacophony of their birdsong filling my ears.

I kept close to shore as it’s easy to get lost on the water but refuge staff offer guided tours of their 15-km canoe trail in warmer months. 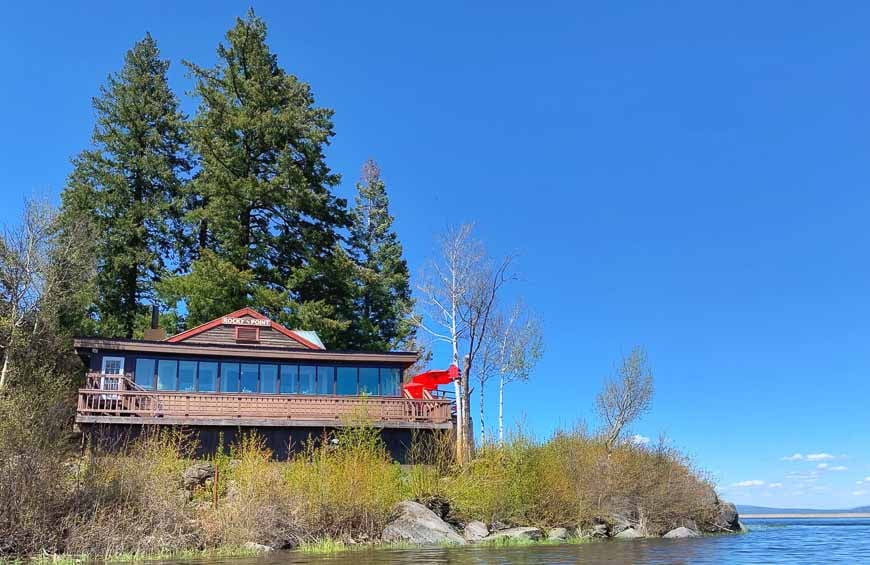 Plenty of bike trails, none of the crowds

Portland is one of the most bike-friendly cities on the continent and nearby Bend is popular with cyclists as well. But if you want to cycle without crowds, Klamath Falls has hundreds of kilometres of trails and few cyclists. Spence Mountain is a short drive from the city and its professionally designed mountain trails offer great views if you only have a few hours to cycle.

If you like your cycling on a flatter surface try the OC&E Woods Line State Trail, 175 km of converted rail trail and the longest linear park in Oregon. And for a truly spectacular cycle head an hour north to Crater Lake National Park where you can cycle the crater’s Rim Drive.

You can get to the city on a twice-daily Amtrak train from Portland with your bike, an option not available if you’re headed to Bend.

Birds that dance on water

I’m a bird watcher but even if you don’t know a snow bunting from a snow cone you will notice the birds. The town sits under the Pacific Flyway (a bird migratory route) at a pinch point between the Cascade Mountains to the west and the high desert to the east and over 80% of waterfowl using the flyway stop here. That means each spring and fall hundreds of thousands of birds stop in the area!

In May the grebes (a loon-like duck) ‘dance’ doing a Paso Doble-type mating ritual that ends with them rising up on their back feet, wings outstretched, neck arched, and rushing across the water in unison. If you’re having trouble picturing it, check out my video here.

Answer the question “Where’s the waterfall?”

This is such a popular question there’s a brochure devoted to it at the Visitor Center but the short answer is there’s no big waterfall in town.

You can find the falls the town is named for while strolling the Link River Nature Trail but you’re more likely to notice blue skies from 300 days of sunshine than the tiny stream of water tumbling over the dam.

More impressive is Upper Klamath Lake with several public parks and a marina with places to launch a boat or a kayak or look for wildlife. The water is cold and prone to algae in summer so swimming in the lake isn’t recommended but the shoreline offers lots of green space for relaxing.

Klamath Falls is equidistant between Oregon’s only national park, Crater Lake National Park, and Lava Beds National Monument. I enjoyed peering into the blue waters of the U.S.’s deepest lake but the 15 m of snow the region gets kept me from hiking to the lake’s surface (I had to go through a snow tunnel just to find the loo).

Each September for two days the park closes the 40-km East Rim Road to cars and cyclists take over in the Ride The Rim event. I’m not energetic enough to cycle at 10,000-metre elevation but driving the rim road offers great views with no sweat.

Some locals told me they hoped Lava Beds National Monument would become the U.S.’s 60th national park but whether it does or not, its still worth visiting its underground caves. You don’t need to be a professional spelunker as guided tours are available.

Swim in a geothermal-heated pool

The town is blessed with an abundance of geothermal resources. You can swim at the geothermal heated Ella Redkey outdoor pool. The Oregon Institute of Technology uses solar and geothermal heat and is the only energy independent institute of its kind in the U.S.

The city has so much geothermal heat it heats its downtown sidewalks so they don’t have to be shoveled in winter. Even the beer at Klamath Basin Brewing Co. Is brewed with geothermal energy.

I stayed at the Running Y Ranch Resort, a great base camp for outdoor lovers. A fitness center offers weight machines and a large pool with lap lanes. There is a trail around the resort for watching birds, jogging or meandering.

The hotel sits above the only Oregon golf course designed by Arnold Palmer. Asked to identify his favorite course in an interview he said he couldn’t pick one (he was a prolific course designer) but named sixteen including the Running Y Ranch Resort course.

At the Favell Museum I discovered a fellow Canadian offering interpretation of beautiful western paintings. Started from the private collection of Gene and Winifred Favell, the squat rock building houses paintings of nature and cowboy culture.

Exquisite baskets woven by Klamath First Nations are also on display. It’s an interesting stop and a good place to hang out on a rainy or sweltering hot day.

Lots of good places to eat

With the Kingsley Field Air National Guard base (one of the few to train F15 pilots) and the Oregon Institute of Technology in the region, there’s plenty of young energy to support some interesting restaurants.

I enjoyed lunch at the Mermaid Garden Café downtown. Thai Orchard Café in the commercial district offered a vast array of dishes for vegans and meat-lovers and fast service. At the Ponderosa Grill at the Running Y Resort I noshed on fish and chips on the deck as the sun set on a full day of adventure.

I discovered the town isn’t just for the birds, although they are pretty spectacular. I left after three days with a memory card full of pictures and memories of an outdoor paradise.

Location map of things to do near Klamath Falls, Oregon

Guest post by Carol Patterson, award-winning freelance writer searching for wildlife and unique landscapes. You can find her at carolpatterson.ca 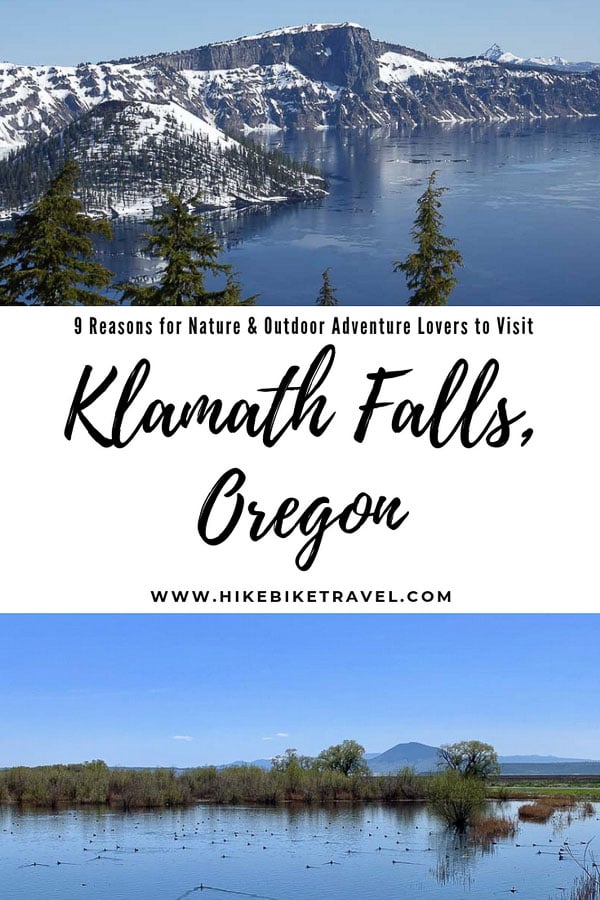 Travel Oregon, Discover Klamath and WestJet sponsored Carol’s trip but the opinions expressed are her own.