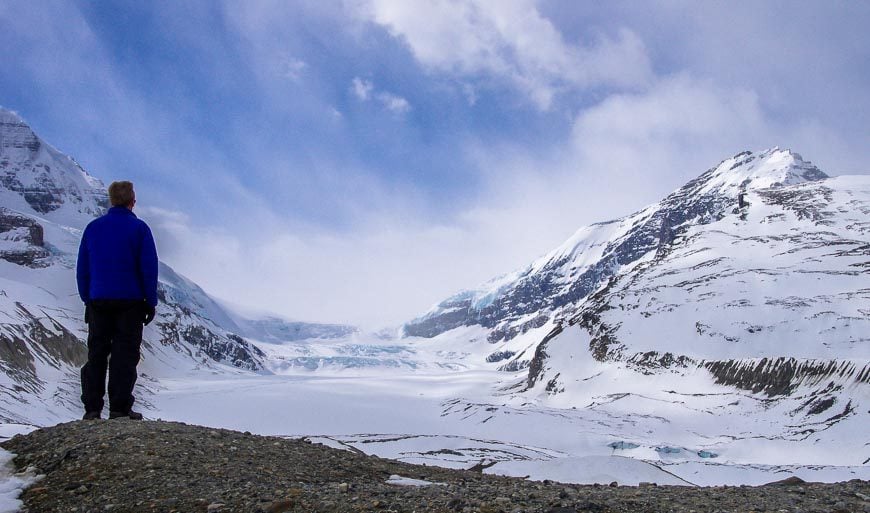 You feel insignificant beside the Athabasca Glacier

What to Do on a Stop at the Columbia Icefield

One spring weekend John and I drove from Lake Louise to Jasper on the Icefields Parkway or “the road through the clouds” as it was called by those who built it during the Great Depression. I’ve driven it many times but always in the summer. In the winter it’s a drive you should only do when the conditions are right. And even though the calendar says spring, in late March it’s still very much a winter drive.

We were exceedingly lucky. The roads were clear and there wasn’t a snow storm in the forecast. Even under what I would consider ideal driving conditions, the sign at the entrance to Jasper National Park rated the road as fair. It was a treat to have the time to stop and visit the Columbia Icefield when there was hardly a soul in sight.

Driving the Icefields Parkway in spring

The beauty of a late March drive is that there isn’t an RV to be seen and in fact there’s barely a car on the road. If you’ve ever driven the Icefields Parkway you know it can be clogged with slow moving vehicles, especially on summer weekends.

Another benefit to a late March drive is that you can stop at the Icefield and feel like you’ve got the place to yourself.

An easy hike on glacial moraines

Although the Athabasca Glacier can be seen from the road, you can hike up to the toe of the glacier and in summer you can take a snow coach tour onto the glacier. It was chilly and very windy when we were there so we elected not to go very far.

It’s an easy hike starting from the parking lot across from the Columbia Icefield Discovery Centre. Follow a trail through the moraine left by the retreating Athabasca Glacier. In spring go as far as is safe. Use common sense.

From late May until October you can take either a 3 or 6 hour guided icewalk tour.

Fun facts about the Columbia Icefield

The icefield is a giant expanse of ice located sit on the Continental Divide, high in the Canadian Rockies on the Alberta – British Columbia border. From the Columbia Icefield Discovery Centre you can see the Athabasca and Dome Glaciers along with several mountain peaks but it’s a fraction of the entire Icefield.

The Icefield, made up of 30 glaciers covers almost 326 square kilometres. They’re ringed by 11 mountains, including the highest one in Alberta, Mount Columbia. The area can get up to 7 feet of snow in a year. (Hence part of the reason for all the bad driving.) Meltwater from the Icefield feeds the Columbia, Athabasca and Saskatchewan Rivers.

Believe it or not the ice is close to 300 m thick!  Running beneath the ice and out of view is Castleguard Cave, Canada’s longest cave. Its accessible to expert cavers in the winter only.

Where is the Columbia Icefield?

The icefield is 133 km north of Lake Louise and 104 km south of Jasper. The distances don’t seem like much in the summer but in the winter if a storm moves in it can be a very gnarly drive.

And there’s nothing in the way of services in the winter between Saskatchewan Crossing and Jasper. Only drive this road in the winter under very good conditions. You also won’t be able to pick up a cell signal.

Where can you stay?

From about April 20th through until Thanksgiving weekend, it’s possible to stay at The Glacier View Lodge. The hotel is on the third floor of the Columbia Icefield Discovery Centre. Rooms are very nice, though on the pricey side.

There is also camping very close by but be warned that even in the height of summer, temperatures can be frosty. And it can snow in any month of the year up here so take plenty of warm clothing. Read Everything You Need to Know About Camping on the Icefields Parkway.

What to do at the Columbia Icefield in summer

Before you even head out on a trip along the Icefields Parkway check out the Columbia Icefields web cam – which starts operating every spring.

Take a hike up to Wilcox Pass

Should you be driving the Icefields Parkway in the summer and find you have three hours on your hands, then try a short hike up to Wilcox Pass.

The well-signed trailhead is just a few minutes south of the hotel. Although it’s a steep climb initially, it flattens out quickly. The views of the Icefields – if you go at least part way up Mt. Wilcox are enchanting. Chances are you’ll see bighorn sheep and masses of wildflowers too.

The Columbia Icefield Skywalk is also a popular activity. Take a beautiful 1 km walk that leads to a glass-floor viewing platform. Below is a 280 m (918 foot) drop! The views of the Sunwapta Valley are breathtaking.

Further reading about things to do between Lake Louise and Jasper 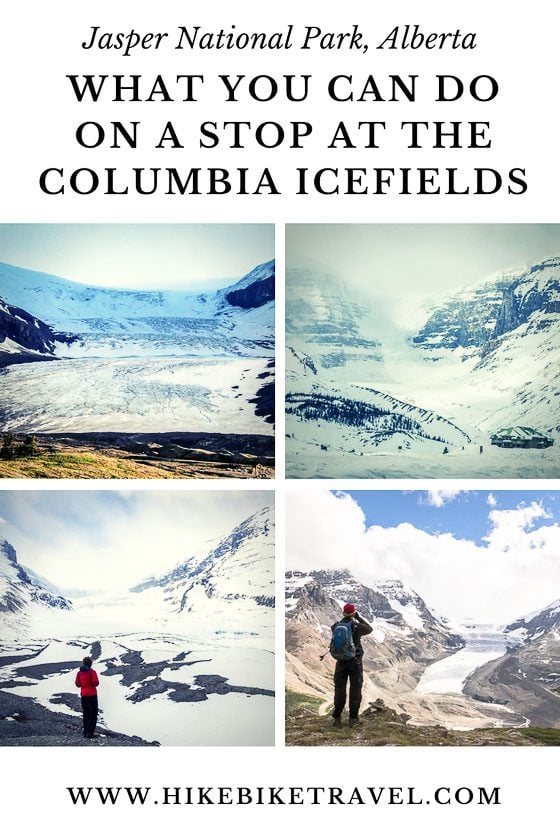