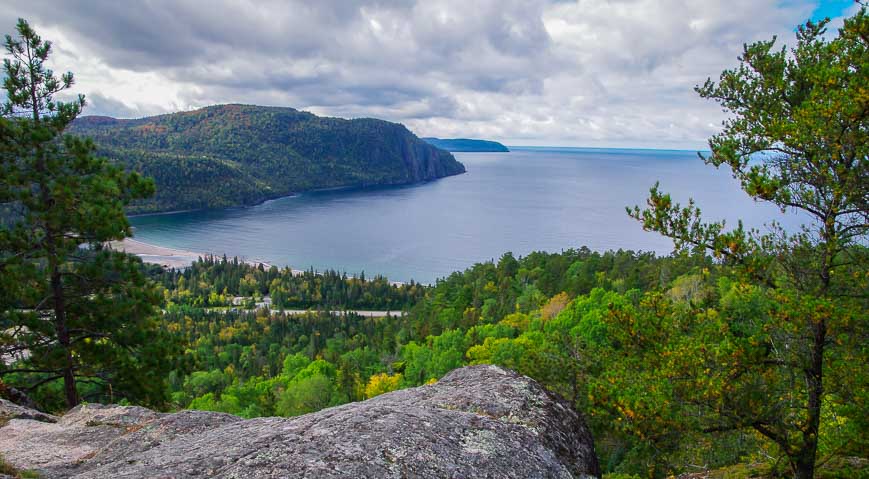 I went hiking on the Nokomis Trail last fall on the way back to Toronto, after my five day backpacking trip along the Coastal Trail in Pukaskwa National Park. It was the perfect length to break up a drive.

The Nokomis Trail – what you’ll see

The trail sits at an interesting intersection as it marks the abrupt change in the forest. North of the Old Woman River Valley the Boreal Forest is predominant; south is the deciduous Great Lakes-St.Lawrence Forest interspersed by boreal lowlands.

It’s particularly evident in the fall when the trees change colour to the south but remain green in the evergreen lowlands to the north.

The trail follows the Old Woman River Valley over ancient cobble stone beaches, remnants of an old lake bed. The rocks can be slick if wet here as they’re covered in moss and lichen. When you’re on the cobble stone beach look for the Pukaswka Pit, a circular depression made by aboriginal people and believed to be a spiritual site or shelter.

After a steep climb, about 30 minutes into the hike, the first of many viewpoints appears. Look out to Lake Superior and admire the cliff in Old Woman Bay that rises 200 metres above the water. See if you can find the immortalized woman in the rock face.

She is thought to be Nokomis – grandmother of the Ojibway demi-god Nanabozho though others have called her La Vielle – Old Woman of the Wind.

Views in the fall, from the lookouts, are stunning with the hills to the south a palette of colours. Look down to the river where black bears can sometimes be seen along its edge.

Once you’ve reached the first lookout, the bulk of the climbing is done. Continue north, hiking past beautiful outcrops of granite to reach one overlook after another. At the high point the view is simply superb and on a clear day Lake Superior’s waters look very inviting to swim – though they’re not.

To complete the hike, descend on the well-marked trail through stunted red and jack pine trees, past beautiful lichen covered rock outcrops to a trail that parallels the highway. If there aren’t any cars, you can cross the highway and head for the beach. It’s a fitting end to the hike and a perfect place to enjoy a picnic.

This five kilometre hike offers some of the best views in Lake Superior Provincial Park. Allow two to three hours to do the loop.

You’ll find the trailhead 200 kilometres north of  Sault Ste. Marie and 27 kilometres south of Wawa. Its across the highway from a large parking lot at Old Woman Bay. You do have to pay for parking. It’s $7.50 for four hours of parking or $5.25 for two hours of parking.

All in all the Nokomis Trail is a great hike and a really good way to get some exercise when you’re driving along the Trans-Canada Highway. 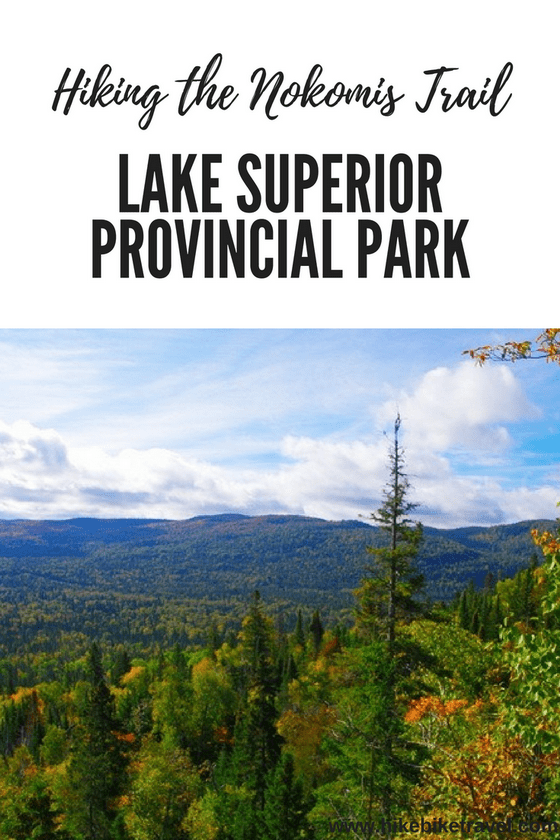 Biking in Ottawa: What You Can See in Just 2 Hours