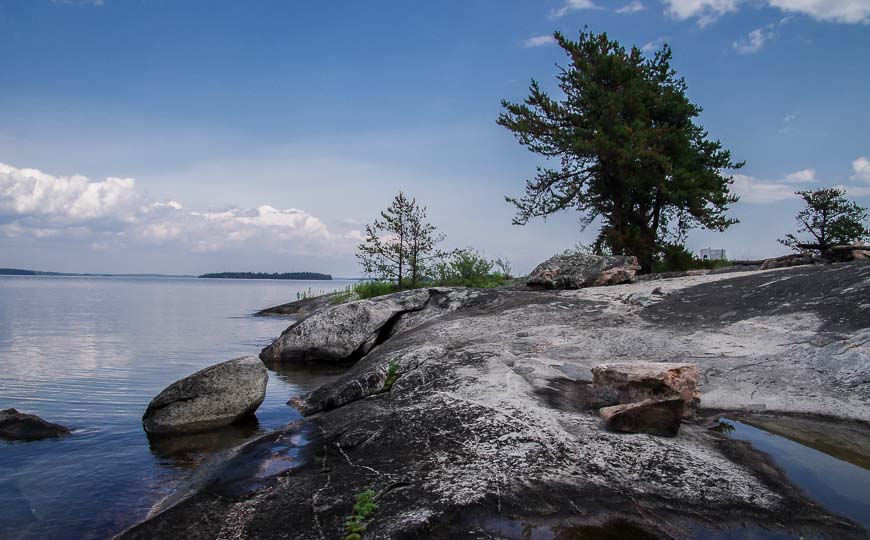 I didn’t know what to expect on my hike on the Nut Point Trail in Lac La Ronge Provincial Park, Saskatchewan. Located just a few kilometres from the town of La Ronge, the trail follows a treed and rocky peninsula to its tip – jutting into Lac La Ronge.

The Nut Point trail is 15 km long one way. It’s best enjoyed as a backpacking trip. I tell you that from experience as I did hike 30 km in one rather longish day.

Although John and I spent an hour at the tip, it wasn’t nearly enough. Take my advice on this one and backpack in for a night or two. When you see how pretty the campsites look at the end of the blog, you’ll understand why.

The first half of the trail – the part that takes you to the Nut Portage – is in pretty decent shape. There are regular markers and much of the 7.5 km of trail follows granite ridges through the Boreal forest.

Within a kilometre of the start of the trail, you pass through a section of forest that was burnt in the 1999 Mallard Fire. That fire took out century old black spruce trees – and the new growth is quite different.

At about the 5 km mark we got our first expansive views of Lac La Ronge, the fourth largest lake in Saskatchewan. It drains northeast into the Churchill River and makes its way eventually to empty into Hudson’s Bay.

Much of the lake is park and what is particularly lovely about it, apart from the Canadian Shield scenery, are the 1,305 islands in the lake, making it a paddling paradise as well.

When we reached the Nut Portage, we mistakenly thought the peninsula continued to narrow. But it did quite the opposite and ended up ballooning in width.

So many times on the last part of the hike, we thought the end was in sight – just to be fooled again. At least if you’re canoeing, the short Nut Portage saves you 15 km of paddling.

For the next few kilometres after the halfway point, the trail markedly deteriorated. It was disappointing to see as it wouldn’t take many days to get rid of the dead-fall and throw up a few more markers. This trail is very pretty and deserves to be kept in better shape.

Be prepared for bugs just in case

The day before we hiked here, we had done a hike to Grey Owl’s Cabin in Prince Albert National Park. To say the bugs were a problem would be a major understatement.

In coming to the Nut Point Trail, I was worried that we would have another full day of bugs. But fortunately that wasn’t the case. For most of the day we kept a head-net on, but having said that, they really weren’t bad.

The end of the Nut Point Trail

When we reached the end of the trail after four hours of hiking we were both thrilled and blown away by the scene in front of us. Classic, almost Georgian Bay like scenery, with granite rock and windswept pines greeted us.

It’s a gorgeous area to camp for a few nights. Views are expansive, the swimming is excellent – if still a little cold – and the feeling at least on a weekday was that we had the entire park to ourselves.

There are no fees for visiting or backcountry camping in Lac La Ronge Provincial Park. I highly recommend the trail, despite the need for some trail maintenance.

Have you ever hiked this trail or done a canoe trip through Lac La Ronge Provincial Park?

Further reading on what to do in Saskatchewan 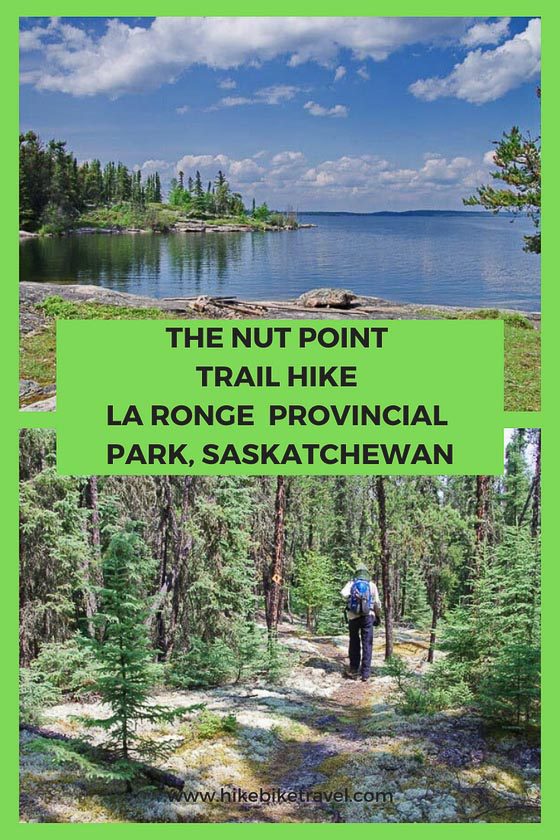