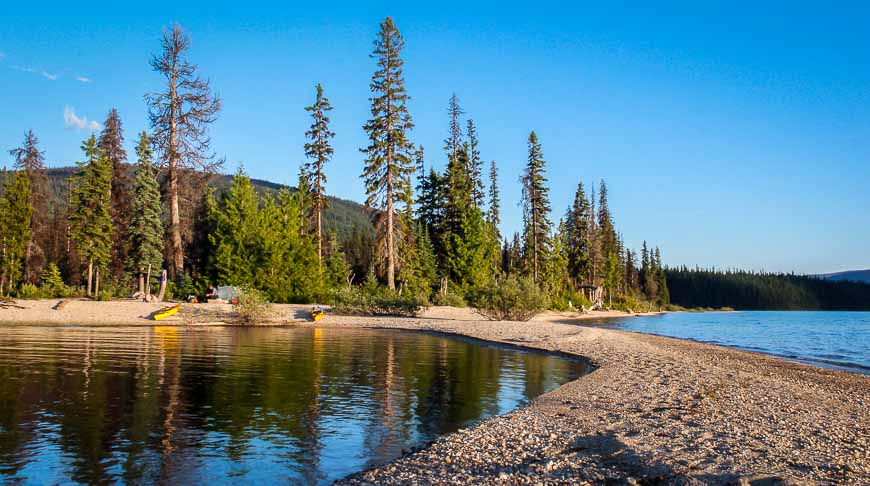 A four night/five day trip kayaking Murtle Lake in British Columbia’s Wells Gray Park gives you a taste of the beauty in this waterfall-filled park, but you’ll likely leave wishing you’d planned on a longer stay.

Murtle Lake isn’t a place many have heard of but if you like paddling, make it a point to visit one summer. The lake is pristine. The setting, ringed by mountains is gorgeous, especially at the end of the north arm. While it is heavily forested around the lake, there are loads of white sandy beaches that make perfect camping sites.

This lake may even be the largest lake in the world that doesn’t allow motor boats – with one exception, the ranger’s boat. You can paddle over 100 km of shoreline and hike on six marked trails ranging in length from 3 km to 15 km round trip.

You can swim too though it takes some time for the water to warm up. And if you’re into fishing you’ll want to bring a rod and try your luck. (Buy a fishing license ahead of time.) The lake is famous for its rainbow trout and kokanee, also known as freshwater salmon.

First you have to get to the town of Blue River, probably best known for being the base of Mike Wiegle Helicopter Skiing. Blue River sits on the Yellowhead Highway, about three hours west of Jasper or three hours north of Kamloops depending on where you’re coming from. From there it’s a 27 km drive on a rough but passable gravel road that winds its way up thousands of feet to a parking lot.

You’re still not there.

It’s a 2.5 km portage on a wide trail from the Phyllis Lake parking lot to the put-in at the Murtle Lagoon through old-growth forest of cedar and hemlock. We elected to rent kayaks from Murtle Canoes for this trip. It simplified the portage since they’re waiting for you at the other end. Plus we didn’t have to worry about unlocked kayaks on top of our car for the next 10 days of our holiday.

However you do still have to portage the rest of your gear in. Fortunately Murtle Canoes made it easy by providing large carts for anyone that rents a canoe or kayak. They’re just sitting there in the parking lot.

The Park Ranger showed up with our kayaks about 10 minutes after we got to the lake. If you are renting a boat you have a narrow window to show up – between 11 AM and 12 noon. Sign the waivers, load up your boats and then make the decision on where to paddle. And don’t forget to pay – $5 per person per night in cash at the put-in.

We chose to explore the north arm of the lake only. It’s a big lake and unless you have a week or more it’s probably best to focus on either the north arm or the west arm.

We chose to paddle to the end of the north arm – mostly because fewer people paddle here but also because it can be less windy. Plus Daryl the ranger said that some of the best campsites were in the north arm.

We spent the last few nights at campsite 19. It’s a big campsite that can accommodate multiple groups. Even though we had to share the space it was worth it. It’s that beautiful! Plus it’s just a five minute paddle to the Wavy Range Trailhead.

What are the best campsites on Murtle Lake?

My husband won’t use bug repellent so each ankle along had about 50 bites. Fortunately the mosquitoes were much less of an issue at all other campsites. 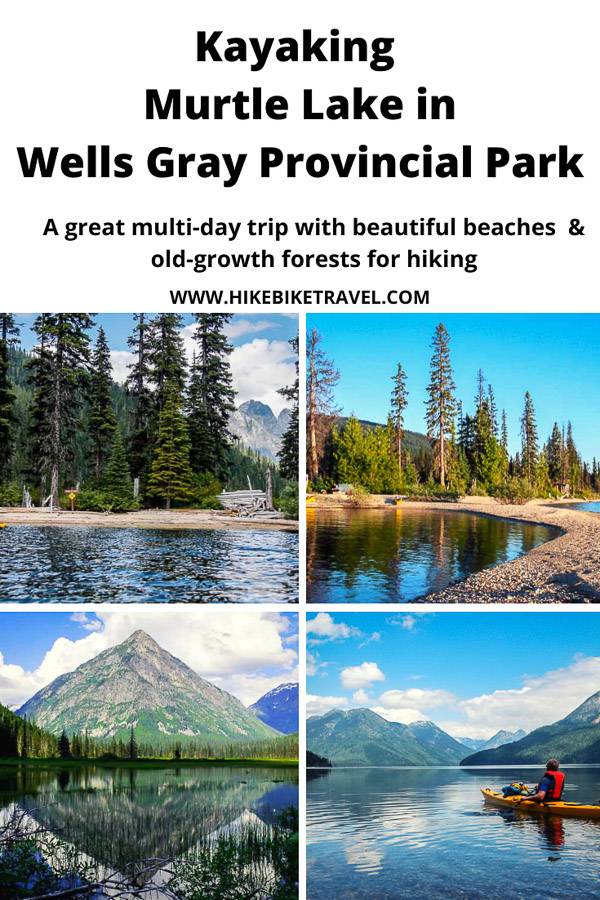