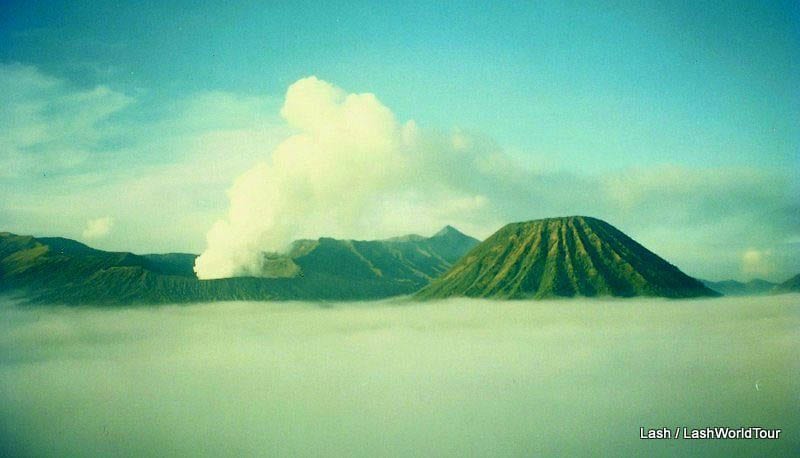 Lash from Lash World Tour takes you on a solo adventure to Indonesia. Discover Mount Semeru trekking tips and what’s its like to climb a volcano with not another soul around. Learn about Mount Semeru’s nasty habit of releasing deadly gases. Read on for the full story.

I awoke in my tent at dawn and peered outside. Grand volcanic Mount Semeru towered over me, its perfectly symmetrical, conic slopes clearly visible in the crisp clear air. I had arrived at my solo camp the previous afternoon, hiking in from tiny Ranu Pani village, the entryway to a remote Mount Semeru trekking experience in central Java, Indonesia.

Ranu Pani village itself is extremely remote and of no interest to anyone except to hikers hoping to summit the mountain. I’d reached the village via a nerve-wracking supply truck ride up a muddy track on a narrow, razor-sharp ridge line during a heavy rain storm.

More importantly to hikers, Mount Semeru is Java’s most active volcano, randomly spewing out deadly toxic fumes. Unfortunate hikers do occasionally die from getting caught in Semeru’s fumes while up on the crater rim.

But Semeru’s potential dangers didn’t put me off summiting the volcano solo. As soon as I’d read ‘Java’s highest peak’ I was hooked. And my climb was about to begin.

There at camp I ate a hearty breakfast while enjoying a beautiful sunrise against the majestic volcano. Then I gathered my things and set out. I left my tent standing with most of my possessions inside. From my camp at the base of the mountain, summiting Semeru was ‘simply’ a half day hike up to the crater rim and back.

It was just a short walk across a flat open meadow to a scrubby forest covering the lower flanks of the mountain. From there, the trail ascended up through the rather barren forest, and then it was another short hike up to the bottom of Semeru’s gray ashen slopes, the volcanic cone itself.

I was greeted there by more than a dozen wooden placards commemorating all the hikers who had died trying to summit Semeru! Gulp. That was a rather dramatic and chilling start to a mountain climb.

I noticed from reading the placards that most of the victims had been young teenage Indonesian guys. I guessed that they hadn’t really known what they were doing climbing a tall, remote mountain. I supposed they hadn’t come properly prepared with rain gear, cold weather clothes, extra food & water and a medical kit.

Perhaps some of them hadn’t been careful while ascending to watch the way back down and thus had become lost. They could have been caught in foul weather or in a waft of Semeru’s toxic fumes. Mountain climbing – any mountain climbing – is serious business, not to be entered recklessly. And teenagers tend to be reckless.

I have to admit that those grim signs made me pause for a moment. But I was an experienced hiker. I’d been hiking since I was 10 years old, over two decades at that point. And I’d been hiking/mountain climbing solo for 5 years, including a two-week trek of the Annapurna Circuit in the Nepal Himalayas. I’d even climbed another ashen-cone volcano – Japan’s magnificent Mt Fuji.

More over, I was prepared. I had two liters of water, electrolytes, a meal and snacks, warm clothes, a Gortex rain suit and sunscreen. I knew how to keep myself safe and prevent myself from getting lost.

I gazed up the steep, seemingly endless gray ash slope of Mount Semeru. From here on I’d be completely exposed to the elements, be it scorching equatorial sun, wind, clouds, rain or storm. And a possible belching fume from the volcano. Luckily it was a clear, blue-sky day. Most likely my only weather danger would be sunburn. And I had my sunscreen to take care of that detail.

I stepped out from the shady forest onto the exposed loose dry ash and began my ascent.

The trail was simply a narrow worn path of hikers’ footsteps imprinted in gray ash. It was firmer than I’d expected, considering the entire cone was nothing but loose ash. Thankfully the going was pretty steady, with not nearly as much back-slipping as I’d experienced on Mt. Fuji.

The trail was not very well marked. A few piles of rocks (cairns) had been placed here & there, but not consistently. Occasionally a stone was painted white or red. That was about it. Mainly I just had to make out the firm path in looser ash.

I ascended only a short distance before I noticed that the entire mountainside consisted of a series of vertical ridges and troughs, running from way up the mountainside somewhere to the base of the cone. By the time the troughs reached the forest at the bottom they were exceedingly steep, deep and wide, like canyons.

I realized it would be quite easy on the way back down to accidentally descend into the wrong ravine, making it  very easy to get lost. So I made a point as I ascended to repeatedly look back the way I’d come, to recognize the faint trail as well as how my entry point looked from different heights

I continued climbing up the steep gravely ash slope, periodically looking back to re-check the trail and descent. Happily nothing unusual happened. The weather remained clear and sunny. And I simply continued slogging up the volcano until I eventually reached the crater rim nearly 3 hours later.

I’d left my tent at 6 AM and reached the summit at 9 AM.  It was cold up there, and windy. Despite being situated just 8 °South of the equator, and it being a clear sunny day, Mount Semeru’s rim was cold at 3676 M / 12,130 ft. I pulled on all my warm clothes and my Gortex jacket.

The views were simply gorgeous! I was surrounded by a sea of heavily forested mountains. Not far off  was the massive cone of Mt Bromo, Java’s most popular volcano and one of the island’s most famous tourist destinations.

I sat down in the ash and ate my canned meal while absorbing the stunning views and enjoying my successful solo summit. I also kept a watchful eye on the inner crater, a deep dark gray ash pit. I didn’t want any toxic clouds to puff up and catch me off guard. Luckily, Mount Semeru was quiet that day.

And then the weather changed

At 10 AM things changed rapidly. Suddenly heavy clouds rolled in and engulfed the mountain in a thick white blanket. The gorgeous views disappeared.

I knew I had to get down as quickly as possible. The clouds could bring rain, which would be cold and possibly make the trail slippery & dangerous. Even worse, I suddenly realized by looking down the way I’d come, I might not even be able to see the trail anymore!

With that realization I jumped up, grabbed my things, snapped a few quick photos, and made a hasty retreat. Fortunately, I could still make out the trail as I went along. And I only had to descend a short way before I emerged below the clouds. Luckily they were only hugging the very summit of Semeru that day. Below them a clear blue sky was shining in every direction and all the way down the mountainside.

Sliding instead of hiking down Mount Semeru

The descent was very steep. Ash began sliding around everywhere, which make walking very tiring. It dawned on me that it would be easy to slide down, like skiing, if I had something to ride on. But what?

I remembered that I had an old grain sack that I’d picked up somewhere to act as a rain cover for my pack if necessary. I pulled that out, placed it on ash slope, sat down, and pushed. And there I was, gliding down Mount Semeru! That was great fun and made the descent much faster.

As I slid down the volcano, I kept my eye on the faint path and my entry point way down below. Even so, at the very end I went down the wrong ravine! At some point down inside that steep ravine, I realized I was in the wrong place. I was amazed. Id’ been so very careful. Imagine if I hadn’t been paying attention. How very easy it was to get lost there!

So I climbed back up & out of the ravine. I reassessed my position. Luckily, had just gone down one ravine over from the correct one.

Soon enough I located the correct exit point by scrutinizing the area even more carefully. Then I climbed down to the forest edge and found the ‘tombstone’ signs. Whew, I’d made it!

I never saw another soul the entire day. It was just me and Mount Semeru.

I returned to my camp, relaxed and ate, then packed up and headed out. With a couple more days of hiking I would reach nearby Mount Bromo and explore another fuming volcano, albeit one full of other hikers and tourists.

Have you ever climbed an active volcano??

July 20, 2015 – Lash’s response via email to a question from a reader on Mount Semeru trekking

As for the route, I don’t have a map or detailed directions. I did just follow the standard route that most hikers take from Ranu Pani village. I’m sure you can find that out at the town’s guest house and/or the national park office.

I think you misunderstood my story. From Ranu Pani village, I hiked 3 days. The ‘half day to the summit and back’ was from my camp that I set up at the base of the volcano on my second evening into the hike.

I don’t know about you, but I most certainly would not/could not do the entire hike from the village and back in 8 hours! It’s a minimum of 2 days, and that’s going hard the whole way. Hope you enjoy climbing Mount Semeru! Be careful of any smoke or fumes from the volcano, which could literally kill you if inhaled. 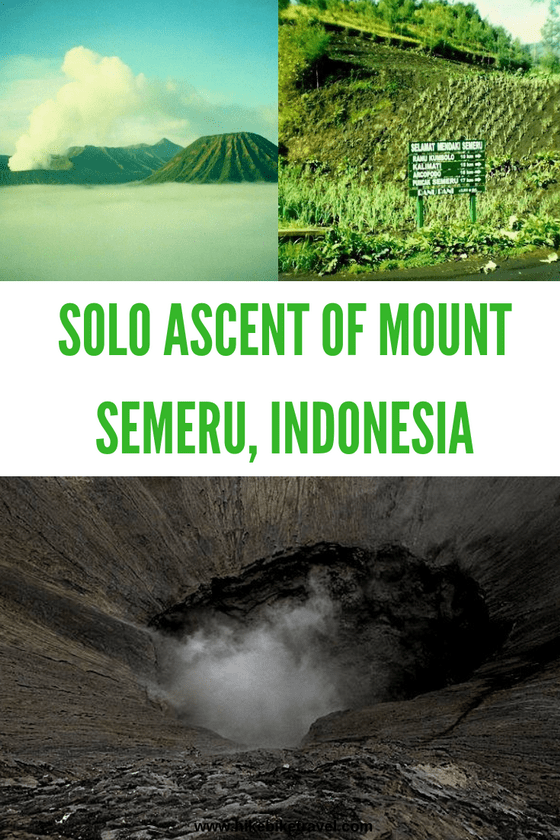 Lash, an expat American who’s been traveling the world solo since 1998, immerses herself in nature, culture and the arts of countries she visits. She aims to inspire others to follow their dreams by sharing her cultural insights, narrative adventure tales, travel tips and photos at LashWorldTour.

Lash is the author of two adventuring guidebooks to Bali, which are available in 3 eBook formats on LashWorldTour and in print on Amazon: Hiking in Bali / Cycling Bali. Catch up with Lash on Facebook or Twitter.