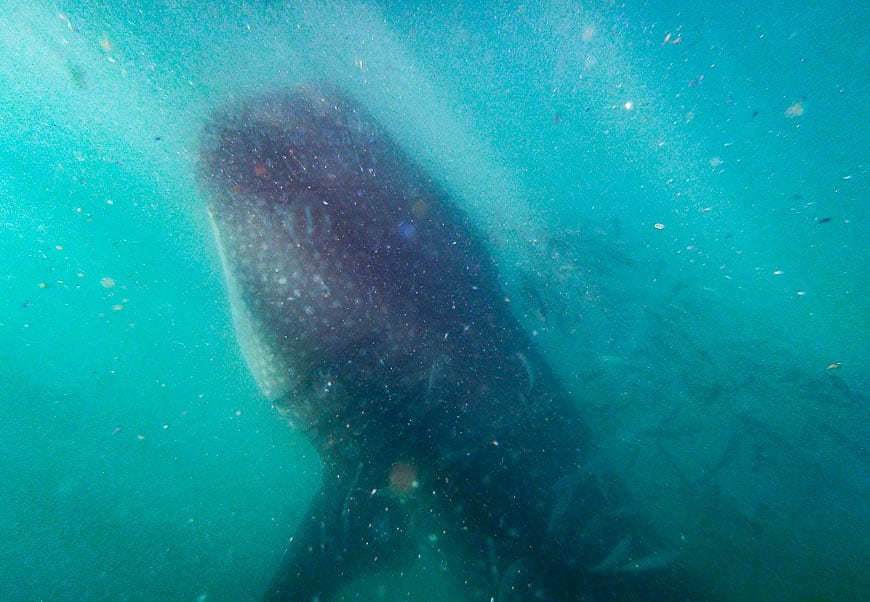 Swimming with whale sharks in La Paz, Mexico is a bucket list worthy experience – and one I highly recommend. I finally did it on a press trip to La Paz – and have to say it was the absolute highlight of my visit.

Whale sharks, massive members of the fish family, will astound you with their size the fist time you see them. Swimming with whale sharks in La Paz, or wherever you find whale sharks, may be scary for the first minute or two. But for me within minutes I was beyond thrilled to be in their presence. This Mexican adventure exceeded all expectations and the only thing I wanted was a bit more time in the water with them!

A few facts about whale sharks in La Paz

Whale sharks are the largest fish in the world. They are about the size of your typical yellow school bus and weigh up to 21 tons. In the wild they have a lifespan of about 70 years but the ones we were swimming with were still considered juveniles at approximately 28 years of age.

Whale sharks are slow moving swimmers but so am I so when you see some of the pictures where we’re practically on top of the whale sharks it wasn’t from lack of trying to get out of the way. With the water somewhat murky at times, it was as if they’d appear out of nowhere, despite their size.

Whale sharks won’t eat you, preferring to eat 3 – 7 times their weight in plankton every day along with any small fish they might scoop up. But when you come face to face with their giant mouths it sure feels like you could be swallowed.

It’s both a thrilling and a holy shit experience at the same time.

There are several tropical seas around the world where you can go swimming with whale sharks – including Mozambique, Indonesia, Australia, Belize, the Philippines along with several other spots in Mexico.

As a Canadian, the experience out of La Paz is one of the easiest to access – with lots of reasonably priced flights to Cabo and from there it’s just a two hour drive up to La Paz. In theory it could even be done over a long weekend.

Our group went with the Cortez Club, based out of La Paz. They offer the whale shark experience between October 1 and April 30 every year. I don’t know what the laws look like in other countries but Mexico has regulated the experience.

Only 14 boats are allowed at any one time in the area (and they are monitored by GPS) and they can’t stay for more than two hours. Top speed is seven knots per hour on the way there but only two knots per hour when you’re actually among the whale sharks.

On top of that only five people and a guide (per boat) are allowed in the water at a time – and then only for 15 – 20 minutes. The time flies by. We had the opportunity to swim twice as there were more than five guests on the boat – but for some, once was enough!

There were a few other suggestions our guide Emilio Garcia – who has been working and guiding in these waters since the ’70’s had to say.

“Be quiet when you slip in the water and don’t splash your fins on top.”

You’d think simple instructions like these would be a breeze to follow but let me just say that when a whale shark quite literally appears suddenly in front of you, quiet swimming isn’t always first and foremost in your mind.

We were told to keep nine feet away from the tail and six feet from the mouth. You’re also not supposed to swim on top of the whale shark or in front of it. All of these rules were broken – but never on purpose.

Trust me when you’ve got several whale sharks around you, it can be very difficult to swim away from one without coming upon another. At times we were told there are up to 14 whale sharks in the area – rather a large volume of fish!

I took my GoPro into the water with me to try and get some footage. It would seem that I need to spend more time focusing on the whale shark and less time trying desperately to get away as my footage had a lot of bubbles in it. Click on this link to my whale shark in La Paz video if you want an idea of what swimming with whale sharks is all about.

The whale sharks were but one of several highlights on this trip to the Baja. If you make it as far as Cabo include at least a day trip to La Paz so you can swim with these awe-inspiring gentle giants.

Further reading on what to do in the Baja 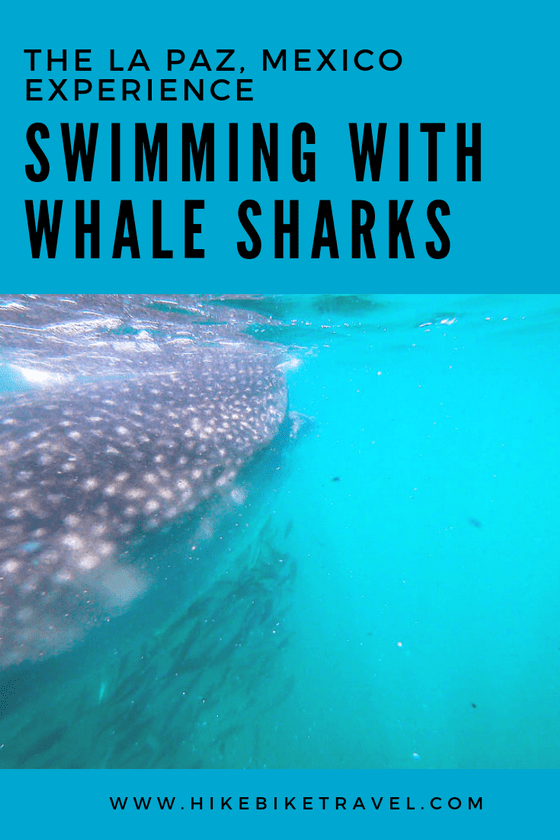 A big thank you to the La Paz Tourism Board for hosting my stay.