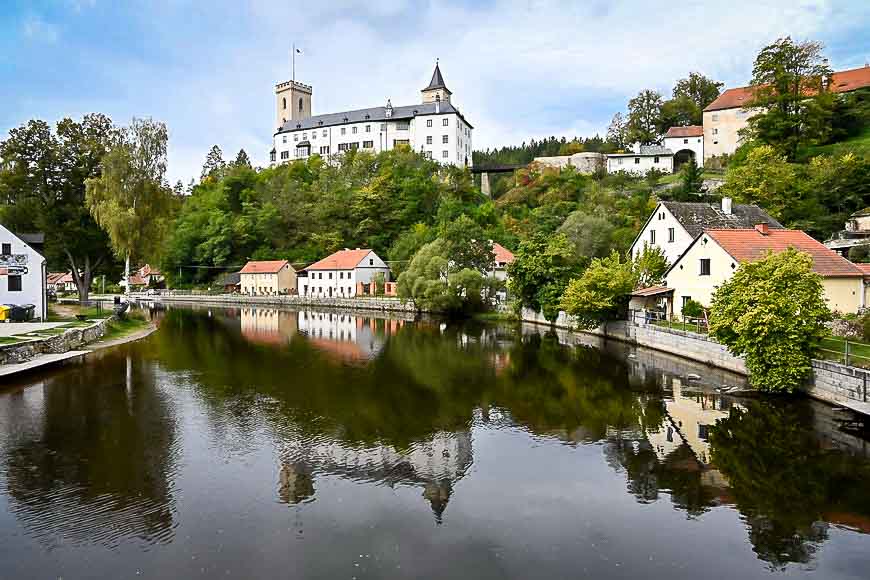 South Bohemia is a beautiful area south of Prague that largely flies under the radar of foreign tourists – save for the storybook-like town of Český Krumlov. South Bohemia is definitely not a mainstream destination.

And yet it’s got an embarrassment of riches including a plethora of fairy-tale like castles, charming villages, pretty man-made lakes, massive forests (the largest in Central Europe), excellent restaurants and plenty of scenic places to drink a pilsner beer. Allow five to seven days to experience these 10 essential stops in South Bohemia.

While a reservoir might not sound like an essential stop, think of it instead as a large inland sea – ideal for recreational use, set against the backdrop of Šumava National Park. With an area greater than 48 square kilometres, it’s an ideal place for boating, swimming, SUP and windsurfing in the summer.

Like cycling? Well there are literally hundreds of kilometres of trails around the Lipno Reservoir – with the Jezerní bike trail considered to be the prettiest of them all.

The charming town of Frymburk, a 2.5 hour drive south of Prague, makes a great base to explore the Lipno Reservoir. You can also access the town by ferry. I met all sorts of successful mushroom pickers at the ferry who were on their way home from a day of mushrooming near the reservoir.

Where to stay: In Frymburk you’ll be warmly welcomed and very well fed at the Hotel Maxant.

Český Krumlov is a fairy-tale looking town and definitely one of the prettiest cities to visit in the Czech Republic. Located on the banks of the Vltava River, its star attraction is the 13th century Český Krumlov Château. Allow several hours to a full day to explore both the gardens and the castle.

Český Krumlov was named a UNESCO site in 1992, for its historical importance and physical beauty. You can’t help but be charmed by a sea of red and orange roofs in a mix of building styles, narrow cobblestone streets and beautiful old houses. It’s also great fun to wander around, exploring cute galleries and gift shops, and stopping at delightful sidewalk cafes, restaurants and pubs.

If you want to sit and enjoy a beer after a day on your feet, I highly recommend a stop at the Depo Gastropub. Find a table outside if the weather is good and enjoy a superb view of the castle park.

Be prepared for masses of tourists streaming through Český Krumlov in the summer. The town is wildly popular, so if at all possible, visit at any other time of the year.

Where to stay: In Český Krumlov I’d recommend Hotel Dvorák with a beautiful view of the castle and the Vlatava River.

If you’re looking for a touch of adventure and a change from castles and churches head to the Lipno Tree Walkway. From the top on a clear day, you can see the Lipno Reservoir, Šumava National Park and even some of the mountain peaks in the Austrian Alps.

But first you have to get there.

The experience starts with a chairlift ride to the top of the mountain. (In the winter, this area is a mecca for downhill skiers and boarders.) Then you wander over to a boardwalk and begin the gradual 40 metre climb over its 675 metre length.

Along the way there are nature stops with signs explaining what kind of birds you might see. There are also places – particularly for kids – to test their balance on moving walkways. Nothing is dangerous, just fun.

If it’s not raining then there is the option to hop on the longest dry toboggan run in the Czech Republic. That spiral tube you see in the picture below is the slide. It’s 52 metres long and will shoot you down to the bottom in short order.

Unfortunately on a rainy day, you hit speeds that can be unsafe so they close it down. It was a bummer for us as it would have been a blast to do.

While I can’t pronounce the name of this charming town, I did fall under its spell. Ceské Budejovice is the beautiful capital city of South Bohemia that dates back to 1265. Its home to Přemysl Otakar II Square, one of the largest squares in Europe and the baroque Samson Fountain. The fountain, built over seven years and boasting a diameter of 17 metres, is the focal point of the square.

Beer has been brewed in Ceské Budejovice since the 13th century. The largest brewery – the Budweiser Budvar Brewery, around since the late 1800’s, is able to legally sell its beer as Budweiser in Europe. Elsewhere it goes by the name of Budvar and Czechvar. This original Budweiser beer bears no relation to its American namesake.

It’s easy to get around the city on foot or by bike. If you have time cycle along the Vltava River, stopping to enjoy one of the lovely little waterfront cafes. And when you’re ready for dinner head to Restaurace Solnice, located in a former salt house that dates back to the 16th century.

Where to stay: For a hotel with a superb location and lovely rooms you’d do well to choose Hotel Budweis, pictured in pink in the photo below.

Only 30 kilometres from Český Krumlov sits the imposing Vyšši Brod Monastery, named after the village it resides in. The monastery was built over a 120 year period beginning in the 13th century.

While we didn’t have time to go inside the church on our bike ride, you can visit it along with the picture gallery, library and chapter hall. What you see in the photo below is but a small part of the entire monastery.

The small town of Rožmberk nad Vltavou with a population of just over 300 people, sits on the banks of the Vltava River. The big draw of the town, apart from its beauty and gorgeous location, is Rožmberk Castle, owned at one point by one of the most powerful families in the country.

The castle, dating back to the 13th century can be visited during the day for a small fee. Photographers will want to climb the 200 stairs to the top of the English Tower to get the very best views.

We stopped for lunch in this charmer of a town and ate at the Hotel a Restaurace U Martina. I’d recommend it for its great food, outdoor seating and riverside location.

While on a bike tour in the Czech Republic, our group of six spent some time traversing a section of Šumava National Park – the largest of four national parks in the country. The park along with Germany’s Bayrischer Wald National Park is the home of one of the largest forest landscapes in Central Europe. Together they are called the “Green Roof of Europe.”

I didn’t see much of the beauty the park is renowned for. Instead I focused on climbing hills and staying on my bike as we descended kilometre after kilometre of severely bumpy track.

But this is a park the locals speak about with fondness and reverence. It’s where they come in summers to swim in crystal-clear but bloody cold lakes. They hike, get out into nature and camp. In winter they come back here to ski.

Described as a Southern Bohemian jewel on the Vltava River, Hluboká is a pretty town with one of the most beautiful castles I’ve ever seen. The castle has been through many iterations from Gothic to Baroque to its present appearance – “a romantic reconstruction inspired by the royal castle of Windsor.”

You can join a tour of the castle and enjoy a walk around its extensive grounds. Slip into the riding hall and enjoy a wander through what is now a first rate art gallery. And in the near future – a real winter garden will be planted in the glassed in area beside the main castle.

The castle has been in the movie Shanghai Knights. Most recently a music video by Korean pop soloist Park Jihoon was filmed in the castle.

Písek is a picturesque small town on the Otava River, just 44 kilometres northwest of Ceské Budejovice. Visit to enjoy the coffee culture around the colourful town square and to see its most famous landmark,  the Stone Bridge.

Spanning the Otava River, the bridge is the oldest surviving one in the Czech Republic – even older than the Charles Bridge in Prague. It dates back to the second half of the 13th century. It’s also one of the oldest bridges in all of Central Europe.

You can spend a very pleasant hour wandering the grounds of the Zvíkov Castle, located about 90 kilometres south of Prague. Positioned at the confluence of two rivers – the Vltava and Otava, the castle has changed hands frequently over the centuries. By the time the 20th century rolled around, a dam was built that flooded the fortified settlement around the castle.

I loved the dramatic setting of this castle, the winding trails and the river views. The massive trees onsite are also impressive. When you’ve had enough of the castle, head to the nearby Zvíkov Brewery, your best bet for a lunch stop and a cold, unfiltered lager.

I hope you can now see what a magical place South Bohemia is to visit!

More reading on the Czech Republic

A big thank you to Czech Tourism for hosting my stay. All thoughts and opinions are my own. 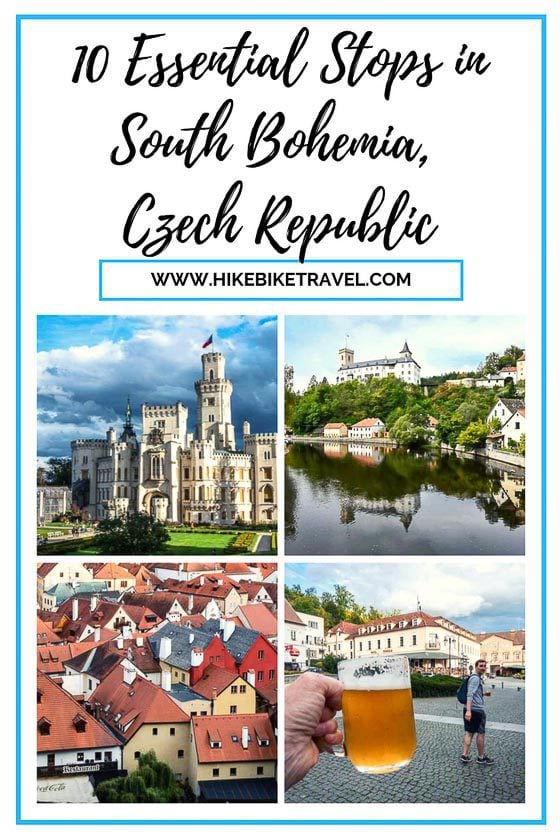 How to Spend 48 Hours in Tabor Czech Republic

Things to Do in Cesky Krumlov, Czech Republic

Named a UNESCO site in 1992 for its historical importance and physical beauty, Cesky Krumlov…

19 Czech Republic Photos That Will Inspire You to Hike

The Czech Republic is a beautiful country to explore on foot. On my walking holiday with…