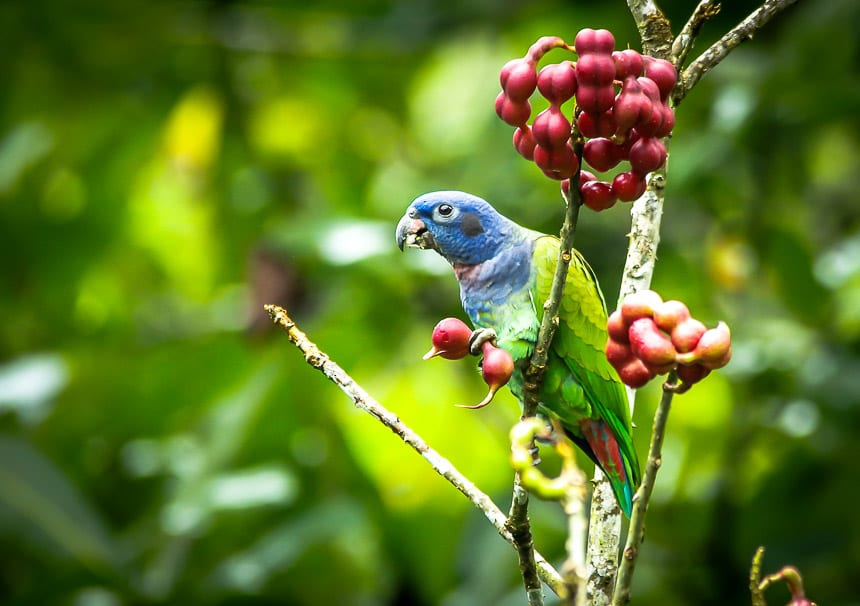 10 BEST Things to Do in Panama

If you have more time in Panama, add a trip to the San Blas Islands for kayaking and/or fly north to visit the coffee plantations and beaches.

Don’t just visit the Panama Canal. Plan to dine by the locks so you can enjoy watching the boats make their way through the canal over a couple of hours. The food is okay – nothing amazing – but I surprised myself with how much I enjoyed the experience.

It was actually one of the top things I did in Panama. You can take a taxi from Panama City to the Miraflores Locks but reserve the restaurant in advance. Ask for an outside table.

You can visit Monkey Island as part of a day tour from Panama City. Explore Lake Gatun by boat, see up to four different types of monkeys in addition to many types of birds – some exotic. It’s also fun to see the ships in the Panama Canal at water level. They are an imposing sight! 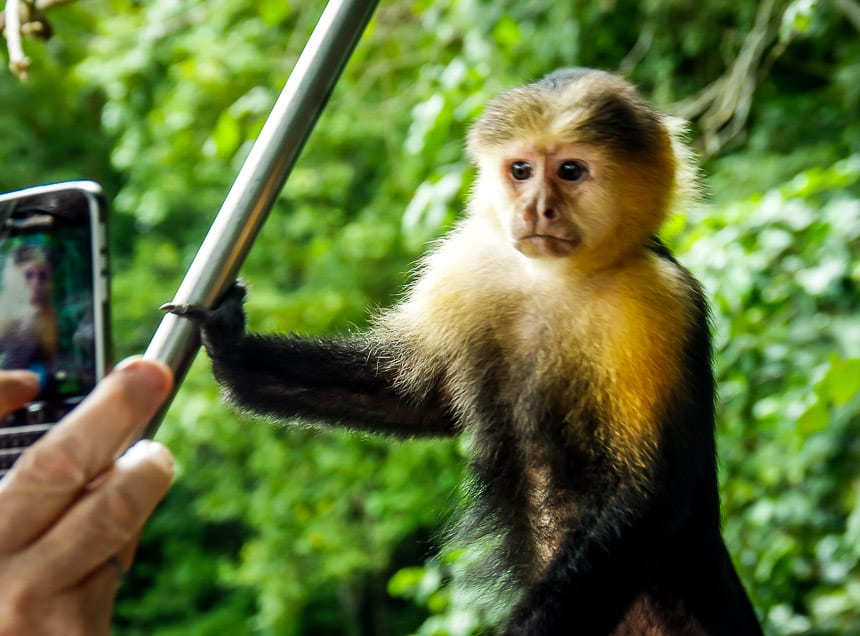 Hold on tight to everything you own; these monkeys are super-fast and agile

Reportedly there are 987 types of birds that have been seen in the country including five species that are endemic. You can expect phenomenal bird watching across the country.

One of the best and most accessible places to go is the world-famous Pipeline Road in Soberania National Park (easily accessed from Panama City). If you stay at Canopy Tower they will include a tour here. One very keen birder we spoke with exclaimed that “the birding on the Pipeline Road was the best he’d ever encountered.”

The now abandoned Fort San Lorenzo is one of the oldest Spanish fortresses in America. In 1980 it received UNESCO World Heritage Site status. Wander the grounds, check out the rooms that at one time held prisoners and admire the views of the Caribbean and the Chagres River.

The fort has a violent history. It was repeatedly attacked between 1668 and 1671, destroyed three times and rebuilt three times. Its importance with a location high above the mouth of the Chagres River prevented boats from gaining access to the river, and ultimately Panama City.

Casco Viejo was Panama City’s downtown until the 1930’s. After its heyday it went into a long decline that has just been broken in the last decade. Ongoing restoration will return the area to its former glory.

Today you’ll find Spanish colonial architecture in a rainbow of colours – some restored, some with years to go; excellent restaurants, markets, small museums and a throbbing, beating nightlife. You can easily spend a half day poking around – even a full day if you go slowly, chat with the locals and grab something to eat.

The area is best explored on foot. Wander along narrow streets, surrounded by a mixture of old buildings being restored, those that already are and many that need to be.

Check out French Park for a view of the Amador Causeway, the Bridge of the Americas and the skyscrapers of downtown Panama City. Visit museums. Support the local shops. Stay in one of the many excellent hotels in the area (see below). Absorb the culture.

Grab a taxi and in short order you’ll go from the frantic pace of downtown Panama City to one where it’s green, lush and peaceful. Panama City’s Metropolitan Park is the ONLY tropical rain forest located within a city (and Soberania National Park where we stayed at the Canopy Tower is only 45 minutes away).

On one of four hikes that loop through the park, look for some of the 976 bird species that are found in Panama along with a dazzling array of orchids and plant life.

From high points in the park you can see the Panama City skyscrapers, the Panama Canal and a few of the nearby islands.

One of the highlights for us was watching leaf cutter ants carry their enormous loads. Simple pleasures!

7. Walk or bike around Cinta Costera

From the fish market just outside of Casco Viejo walk or bike on a pathway until you reach the skyscrapers of downtown Panama City. Despite the fact busy Balboa Avenue runs parallel to the paths, there seems to be enough space and greenery to dull the noise.

On weekends this is a very popular area. The ocean is your constant companion on this walk along with birds, boats and all the wonderful clouds you see.

Allow about an hour each way, and more if you sit on a bench and just watch the world go by. You can also rent a bike just outside of the fish market if you’d prefer not to walk.

8. Eat like the locals in the Fish Market (Mercado des Mariscos)

When you arrive at the Fish Market you will be besieged by vendors trying to get you to eat at their location. I don’t know how you really pick one over the other. We looked for restaurants that were hopping and full of locals.

It’s a colourful spot with a lot of character and the food is decent, not amazing. Adjacent to the fish market you can watch all the activity around loading and unloading of boats, repairing boats and just hanging out watching boats.

I think a lot of us have an attraction to sloths. Fortunately we were able to get close-up views of one at the Canopy Tower. My husband had breathlessly come running down to our bedroom to tell me about the sloth. I replied – it’s a sloth. They don’t move very quickly.

And it didn’t. In fact it barely moved a muscle over an hour but still it was a thrill to get so close.

10. Spend a night or three in the Canopy Lodge

Located in El Valee de Anton in the Panama highlands, the Canopy Lodge is part of the Canopy Tower group and an ideal spot for nature lovers.

Rooms aren’t fancy but they are comfortable. Family style meals were way better than expected. And the bird life around the lodge is remarkable, especially as they put out big trays of fruit to attract them.

You can also walk into town and check out craft stores, walk to a waterfall or go horseback riding. The area does not feel touristy in the least.

The one thing you shouldn’t do in Panama City

My husband, John has exceptional navigation skills which he demonstrates time and time again in the wilds of Canada. I would have to say his city navigation skills aren’t quite so good. Of course it doesn’t help if you don’t have a map or any landmarks either.

Rather than take a cab we all decided to walk back to our hotel in Casco Viejo from our lunch spot at the Fish Market (Mercado de Mariscos). How hard could that be?

What we didn’t appreciate was the location of El Chorrillo, a sketchy neighbourhood adjacent to Casco Viejo. Somehow we took one wrong street, then another and in no time ended up getting deeper and deeper into the El Chorillo neighbourhood.

You could tell. People watched us like a hawk. We knew it wasn’t good but nor did we ever feel unsafe, merely unsettled. After about 15 minutes a police car pulled up beside us shouting muy peligrosa (very dangerous) at the same time as a women was about to come to our rescue and point us in the right direction.

The police were kind and helpful and rather than stick us in a cab insisted that we all jump in the back seat and they’d drive us back to our hotel. That was a first for all of us and one of my more memorable travel experiences. And we’re all thankful it ended so well.

Where to stay in Panama City

We stayed in two places in Panama City – the American Trade Hotel and the Tántalo Hotel. Tántalo has very arty rooms and a rooftop bar with a hopping nightlife – which translates to a lot of noise in some of the rooms well into the wee hours.

Between the two I preferred the American Trade for its lovely though small rooftop pool and quieter ambiance.

We also loved both the Canopy Tower and the Canopy Lodge. Both are best suited to birders and nature lovers.

Useful information about the country

The currency is the US dollar.

There are no hurricanes in Panama but there is a wet and a dry season.

The standard voltage in Panama is 110 volts. You don’t need a power plug adapter if you’re from the US or Canada. Plugs and sockets are types A and B.

The roads are generally good in Panama though traffic in Panama City can be nuts. We didn’t rent a car. Instead in Panama City we explored on foot and used a taxi once. Outside of the city, we used the cars and drivers provided by the hotels we stayed in. 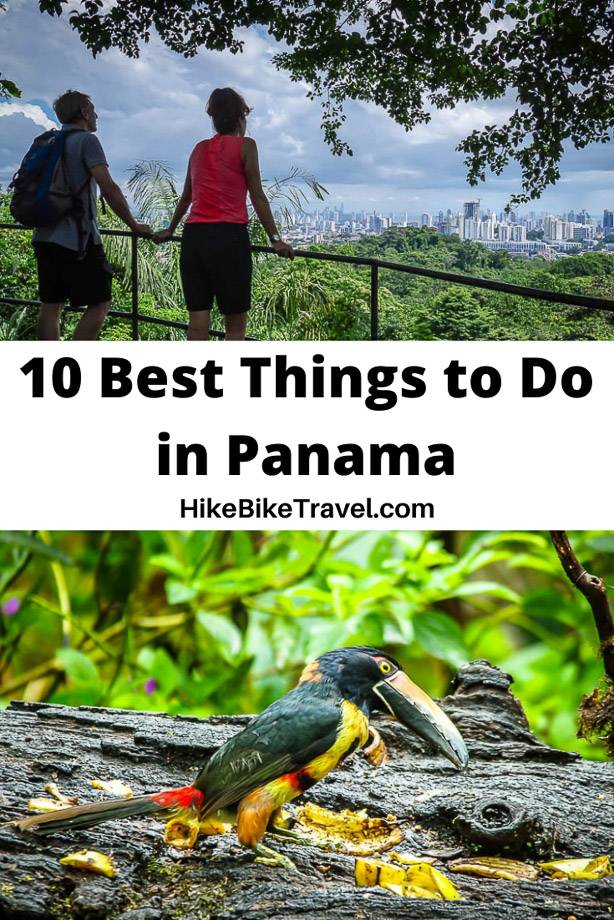