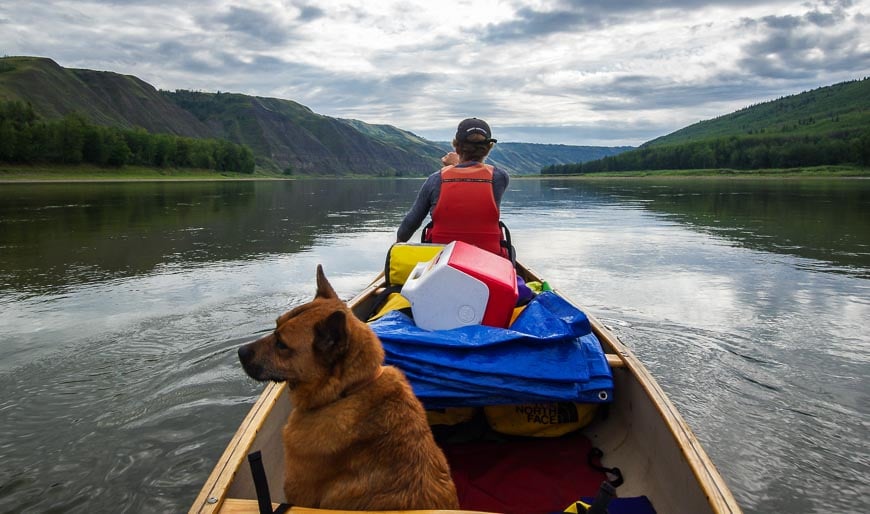 Unless you’re from northern Alberta, the Peace River probably doesn’t register on your radar. Yet it’s a huge river that dramatically cuts across the province for over 1,000 km. Starting in the Rocky Mountains of northern BC, the river flows northeast through Alberta to empty into the Slave River, one of the Mackenzie River tributaries. The Mackenzie is the tenth longest river in the world!

Canoeing the Peace River is a fabulous Alberta adventure but from what I saw hardly a soul knows about it. Or as Andrea Lindsey says below they’re afraid of it.

Canoeing the Peace River – Class I with no portages or rapids

The Peace River is a Class I river which means there are no rapids and as a bonus there are no portages either, at least on the section we paddled. The flow rates can vary dramatically according to what is discharged from the W.C. Bennett Dam so you must camp high and pull your canoe up every night. The only other hazards are occasional errant boulders and shallow gravel bars. You learn to take the outside curve of the river to avoid grounding out.

We rented canoes and got a shuttle from Peace River Cabins and Outdoors. The night before was spent in one of their charming self-catering cabins overlooking the Peace River.

Although we could have chosen any number of launch sites we had decided to start at the Cotillion Recreation Area as a four day paddle would get us into the rhythm of life on the river.  This launch site, a 2.5 hour drive from the Peace River Cabins, is only about 30 kilometres shy of the British Columbia border.

According to Theresa Griffith, the author of the free Peace River Paddling Guide, once on the Alberta section of the Peace River you’re on a prairie river rather than a mountain river with the hills less cliff-like and sandier in nature. I think they’re still very impressive and far more dramatic than what I expected.

We saw only one power boat over the 40 kilometres paddled – and not another canoe. Although we spied only a few mule deer on the first day, it’s apparent that a lot goes on along the river judging by the quantity and diversity of animal tracks.

There aren’t a lot of choices when it comes to camping along the Peace River. As much as I like wild camping without a soul around, it wasn’t to be on this river – and it certainly wasn’t worth the effort. The banks are slippery, muddy and high so lugging gear and then finding a flat spot without a tree or a bush is a challenge. Over the four day trip we made campgrounds are daily destination.

The Many Islands Campground requires quite a slog to reach the actual campsites. Our site was about 400 metres from the water so not only did we get lots of exercise paddling but it took three loads to get everything up.

We picked the closest campsite and didn’t have any neighbours. In exploring the campground I spoke with one woman who said she paddled the Peace about 20 years ago. Her first comment – isn’t it beautiful? It really is – and that’s why John and I were both baffled that we hadn’t seen another paddler all day.

The campsites are $15 per night and offer outhouses, picnic tables and potable water. There is a camp host onsite as well.

On the second day we set out at a leisurely hour as we figured we could knock off 41 kilometres in short order. The current makes the 40 + kilometres in a day possible.

We’d been told the river was flowing at about 8 km/hour and in places it was certainly moving but there were lots of times over the four days we went looking for stronger current.

This was another delightful canoeing the Peace River, even with a 90 minute rain shower. We saw more wildlife – perhaps five deer, four beavers (one that splashed directly in front of me) and a coyote but not a soul all day.

The scenery was similar to the first day with big hills lining the sides of the river but there were more islands. We missed a stop at Carter Camp – which can be reached by road – named for a couple who had settled here in 1917 to ranch cattle and run freight up and down the river.

We found the campsite at Pratt’s Landing marked by flagging tape and a mini white lighthouse – but still you had to be looking for it. Pulling off at the side of the river, my first thoughts were this doesn’t look great.

But crawl up the bank and you’ll find a lovely campsite – albeit a completely deserted one. Camping here is free and it comes complete with outhouses, firewood, cooking shelters, playgrounds and non-potable water. Although it was a beautiful site, it was also a little weird with no one else around – especially since it was a Saturday night. We did hear that the drive in can be steep but still it was odd.

Many people would tackle this paddle over five days instead of four and stay at Dunvegan for the night instead of continuing on to Camp Island. We opted for a longer day on the river and a shortened tour of historic Dunvegan Provincial Park but since it had poured hard first thing in the morning we didn’t get going till 9:30. Later we heard that it had teemed with rain for the entire day closer to Peace River. We felt fortunate we only had a few minutes of sprinkles once we hit the water.

It’s a relatively short 28 kilometre paddle to reach Dunvegan. You can pull off on river left past the bridge and then walk up to explore the park. You can camp here for $34 per night.

Historic Dunvegan and the provincial park share the site. There’s a Visitor Information Centre where you can talk to staff and pick up a map of the area. Really you need two to three hours to make the complete tour as there’s a lot to see and a lot of ground to cover. It’s also possible to take a guided tour and if we’d waited around a little longer we could have eaten fresh baked bannock cooked over a fire.

The Peace River has been a corridor of travel for several thousand years. Fire pits and arrowheads from 2000 years ago attest to its use. Europeans and missionaries arrived in the early 1800’s, with the first trading post established in 1805. Named Dunvegan by Archibald Norman McLeod of the North West Company for “his ancestral castle on the Isle of Skye,” it later merged with Hudson’s Bay Company and operated as a post until 1918.

It’s a short walk from the Visitor Centre to see the beautiful St. Charles Anglican Church and Rectory – but you can’t get inside. We missed the Dunvegan Gardens and were scolded for doing so by Ann of Peace River Cabins. (I guess they’re quite beautiful.)

However, they are a two kilometre return walk from the Visitor Centre and we still had 40 kilometres of paddling to do. And we missed the historic area on the other side of the bridge though we did see some of it from the canoe.

The rest of the paddle, despite its length was a joy. The water was calm and the cloud formations and reflections kept it interesting. Once past Dunvegan there were more signs of life with the occasional cabin or house to be seen high up above the Peace River.

We probably rolled into Camp Island about 7 PM – and again we weren’t quite sure if it was the place to be. It’s used by fisherman – and in the interior, it’s none too pristine so we camped close to the water on high ground.

There are no services here and more mosquitoes than anywhere else. But it was peaceful at least initially. Later I lay awake wondering what was making munching noises not far from the tent door. I never did find out. That night I finally fell asleep to coyotes howling and owls hooting.

On the last morning I said to John – I want a moose and a bear today. Less than 10 minutes later I got my bear.

I saw something black jump into the river and start swimming. We coasted as close as we deemed safe (with bear spray very handy) and watched a black bear swim across the river through strong currents in about five minutes. It got up on the far shore, shook once and took off – but all the same it was a real thrill. And I finally got my moose sighting on the drive home.

It was mostly a mellow day canoeing the Peace River on our fourth and final day. Generally the banks were lower than earlier in the trip and the river still retained its deserted feel.

In fact we NEVER saw another paddler and in total over four days we saw only two boats, two fisherman at Camp Island, a handful of people at Many Islands Campsite and some visitors in Dunvegan Provincial Park.

Lunch on the last day was beside a stack of logs left when the river dropped. We saw these on numerous occasions and truly marveled at the power that could carry such a load. At times the Peace River lives up to its other name – the MIGHTY PEACE.

It’s always bittersweet when a trip comes to an end. I’m thankful we made it one piece, and proud of the fact we paddled as far as we did in just four days. Ideally it would have been great to have another day and paddle all the way into the town of Peace River, a further five hours away.

According to our hosts at Peace River Cabins the bulk of the people who rent their boats do only day trips to the town of Peace River. But if you’ve got some paddling skills and you’re comfortable in the wild, I think most every paddler would enjoy this trip.

While canoeing the Peace River is most definitely a wilderness experience – some of Canada’s richest farmland and gas country is just a short distance back from the hills. You’ll only find spotty cell service around Many Islands Campground and Dunvegan Provincial Park.

In theory you can paddle the river from Hudson’s Hope in BC all the way to Horse Point, a total distance of 708 kilometres. Our 175 kilometres canoeing the Peace River was but a small taste of what the mighty Peace has to offer.

Further reading on paddling in Alberta 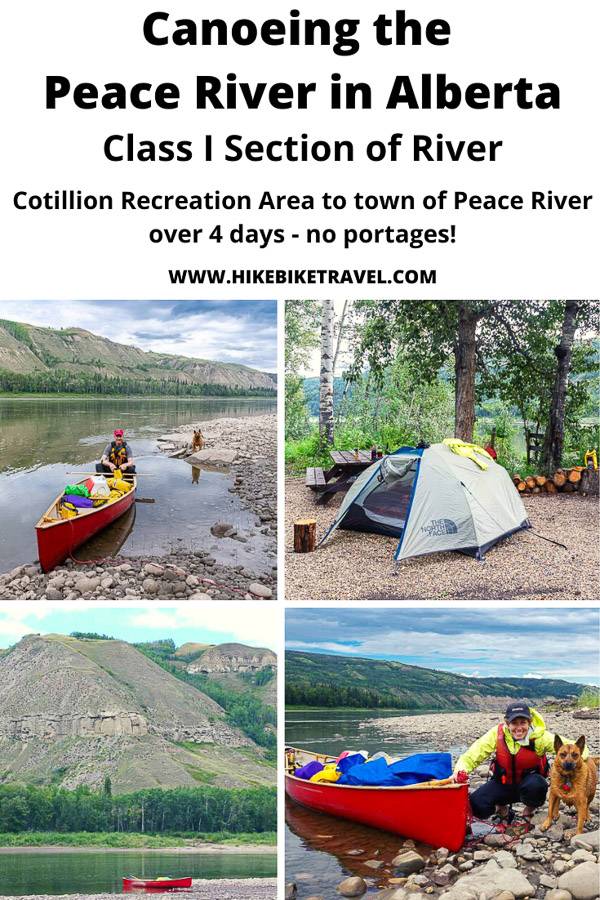 Thank you to Travel Alberta for sponsoring this post – and suggesting I do such a trip. It was a treat to disconnect from the world for four days.