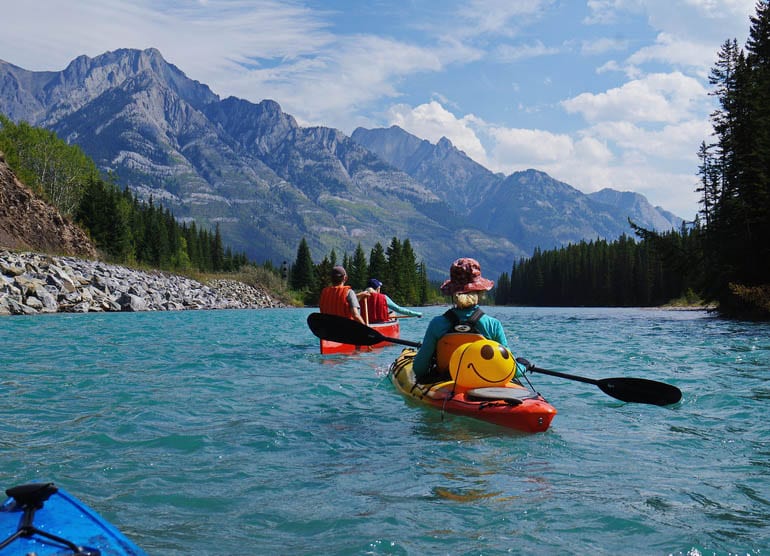 If you’ve ever driven the Trans-Canada Highway through Banff National Park you’ve seen the Bow River. It’s a beautiful ribbon of turquoise-blue that you can’t miss. I’ve wanted to paddle it since moving to Calgary. I finally did.

The Bow River starts in the Rockies and flows onto the prairies to meet the Oldman River which then drains into the South Saskatchewan River. In Banff  National Park there are three sections of the Bow River that are popular for paddling. We did a variation of the second section.

Where do you launch on the Bow River for a Castle Junction start?

We paddled about 28 km along a stretch of the Bow River beginning at Castle Junction with the actual launch within metres of the bridge just off the Trans-Canada Highway. Get off at the exit for Highway 93 and go north towards Castle Junction.

You’ll find a parking lot if you take the first right immediately after crossing the bridge shown in the photo below. It’s very obvious and it’s literally seconds after you get off the Trans-Canada. Also check out the huge osprey nest on the bridge while you’re there. We could hear osprey but we didn’t see them.

For the most part the river is very easy to paddle. You do need to keep an eye out for the occasional rock and certainly sweepers, especially in the latter half of the paddle on this section. There are lots of riffles and Class I rapids – all great fun providing you hit them head on.

The one major area of concern is where Red Earth Creek Rapids meets the Bow, about two kilometres past the Johnston Canyon Campground. When you come around a big right hand bend there’s a big eddy where you can pull out. Then it’s a quick walk through the woods to scout the rapids. We did just that yesterday and decided they looked safe.

The short section ended up being a thrill – but if it was earlier in the season or you were unsure of your paddling ability, plan to portage the short distance.

The paddling after the Class III rapid was a mix of riffles mixed with long stretches of almost calm water. Certainly the last hour required a lot more effort as the current had all but disappeared. We were lucky we didn’t have a head wind.

Getting off the river

We didn’t go all the way to Banff. Instead we had left a vehicle in a pull-off on the Trans-Canada. It’s the first place you come to after the junction with Highway 1A as you head west. We could see the parking lot from the river and could easily get ourselves in position to get over and then off. The only downside was the muddiness of the pull-off location.

Paddling the Bow River – either for a day or over a couple of days should you elect to start in Lake Louise is a marvelous one to two day adventure.

Its fun, beautiful and a great way to spend time with friends. If you don’t have a kayak you can rent one in Banff from the Banff Canoe Club – though they won’t let you reserve. You’re probably better off renting from MEC, Sports Rent or the Calgary Outdoor Centre.

Further reading about paddling in Alberta 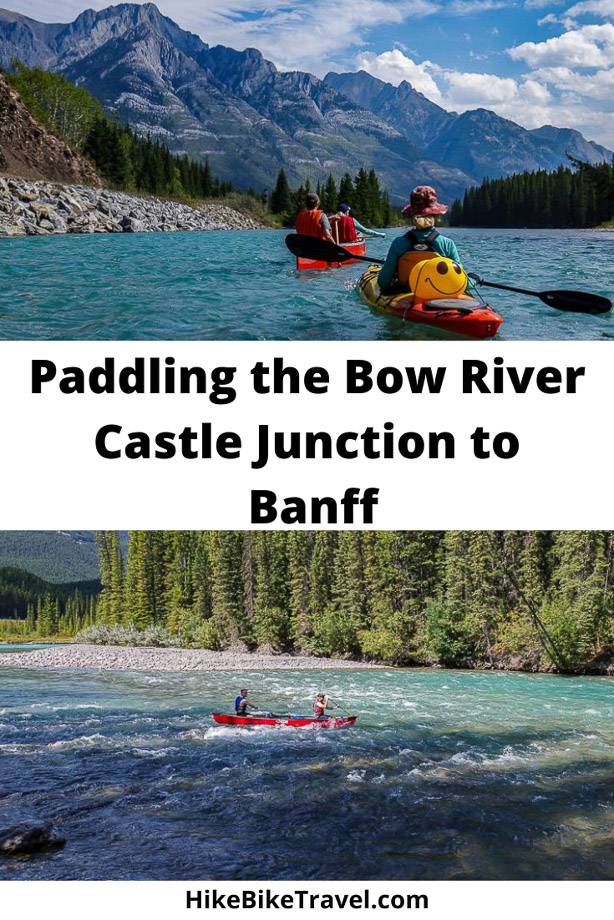