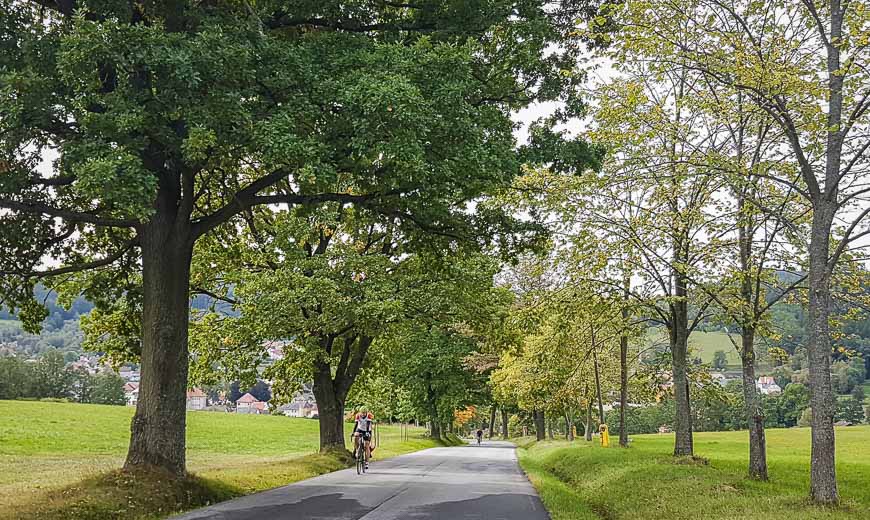 This hill doesn't quite fit the punchy climb category

Three days of cycling in the South Bohemian region of the Czech Republic merely whet my appetite for what’s available in the country. Lots has been written about the Prague to Vienna bike ride, especially with so many outdoor-adventure companies offering the tour.

But the lesser known parts of the Czech Republic like the South Bohemian region are not nearly so well represented online.

Our group of cyclists, made up of five young males and myself enjoyed a three day tour with Lucas Svarovsky, the owner of Europe Bike Tours. He has been designing, organizing and leading bike tours for years all over the Czech Republic and into Poland, Austria, Hungry and Slovakia. I’d recommend his company in a heartbeat – for their knowledge of the area, the back stories we learned and because he’s just such a nice guy. Plus he speaks perfect English.

Check out the video on cycling in South Bohemia below.

Our bike tour started with a shuttle to Šumava National Park from Prachatice, where we had done a culinary e-bike day tour the day before.

First we knocked off a short, easy section of the EuroVelo 13 – otherwise known as the Iron Curtain Trail. It was eye-opening to cycle to the border of Germany and the Czech Republic. You can’t help but reflect at the hardship and the lives lost when you look up to the guard tower – and literally at an iron curtain of barbed wire stretching along the length of the border.

This section of trail in the South Bohemia region is extremely well-signed as you can see in the photos below.

After a return to the starting point it was time for a snack – because we’d just cycled all of about 12 kilometres – though we really did need the fuel for the climbs ahead.

The riding in Sumava National Park was primarily in the trees, sometimes on insanely bumpy roads as we would discover over the course of the day.

Our bikes – made by Specialized – are called gravel bikes in Europe. I was incredibly impressed at how they handled the bone-rattling sections of the day, and yet the tires weren’t fat like a traditional mountain bike.

By the time we stopped for lunch at the Wellness Hotel Marlin, everyone was legitimately famished. We dispatched with a couple of punchy climbs – my new term for a gnarlier than average climb – and were ready for a meal of fresh trout followed by a slice of apple strudel – and a beer of course.

After lunch we made one stop on the way to the Lipno Reservoir to photograph a beautiful old church filled with moss-covered headstones in what is now the defunct village of Zadní Zvonková.

Continuing past the church, the road quality improved immeasurably. We descended on lovely, smooth asphalt roads to eventually reach the Lipno Reservoir. The cycling for the last 15 or so kilometres was fast and easy.

To finish our 73 kilometre cycling day we waited for a ferry to take us across the Lipno Reservoir to Frymburk and finally the Hotel Maxant our home for the next two nights. It was a mellow way to end what was a harder than expected day on the bike.

A day of “punchy climbs” on route to Český Krumlov

Looking at the itinerary, I figured we were in for an easy bike ride from Frymburk to Český Krumlov. According to the notes we would cycle a mere 46 kilometres with two or three punchy climbs.

Scroll down to the map at the end of this section and you can see we were wildly misled (though trust me by the end of the day I was really happy at what we cycled.) I count five punchy climbs – primarily after lunch. Fortunately I didn’t see the map ahead of time.

The morning was a complete delight. We crossed the reservoir via a bike path and then rode along its length, admiring the woods and the views, on a smooth dedicated, multi-use trail to reach the Vyšší Brod Monastery, called the spiritual centre of the South Bohemian region.

After a photo stop we did our only climb of note in the morning and in no time arrived via a lovely downhill ride into the beautiful riverside, thirteenth century town of Rožmberk nad Vltavou.

Lunch was eaten outdoors on a patio with views of the gorgeous Rozmberk Castle. By now we were into a routine too – with the guys all saying an enthusiastic yes to big mugs of beer to accompany lunch.

The climb to Český Krumlov

The fun started immediately after lunch. The road took us up towards the castle you can see high on the skyline in one of the photos. It was actually incredibly beautiful with massive trees lining much of the roadway.

After the first high point I figured, as did the others, that there was only one big climb to go. It wasn’t until Lucas recommended we each choose an energy gel and eat it before the next climb that I started to clue into what lay ahead.

At the end of our cycling day our host Jiří explained to us that we cycled over a few hills that were Category 3 and 4 climbs. What that means is that they were steep, long hills with over a 7% grade. He also told us we’d have to go to the Alps to get the HC (hardcore) category. No thanks.

Despite some moaning at times, I think all of us who did this bike ride felt an immense sense of satisfaction. Even better was the fact that we cycled right into the main square of Český Krumlov, a pretty a town as I’ve seen anywhere in Europe.

We arrived with enough time to do a quick tour of the castle, followed up by a well-deserved beer and meal with a view at the DEPO Gastropub. The day ended with a shuttle back to our starting point.

The easiest part of our South Bohemian Region cycling trip

Our last day of cycling was extremely easy. It took us from one pretty town – Hluboká nad Vltavou to another, České Budějovice, along the Vltava River. We enjoyed both the picturesque countryside and cycling alongside the river – watching the houseboat until it moved out of sight. I doubt it took us more than an hour.

The night was spent in the lovely Hotel Budweis overlooking the river – with dinner just a few blocks walk away at Restaurant Solnice.

The cycling in the Czech Republic is usually on either quiet roads or dedicated bike paths. I found the drivers to be very respectful of us. Although we had an English speaking guide with us at all times, Czech people are helpful so don’t let the language barrier stop you from traveling outside of Prague.

Lucas and his bike company – Europe-Bike-Tours offer loads of bike trips, including guided, self-guided and custom tours. They would be an excellent choice if you’re planning to visit the Czech Republic.

Thank you to Czech Tourism for hosting my stay. Thoughts as always are mine alone. 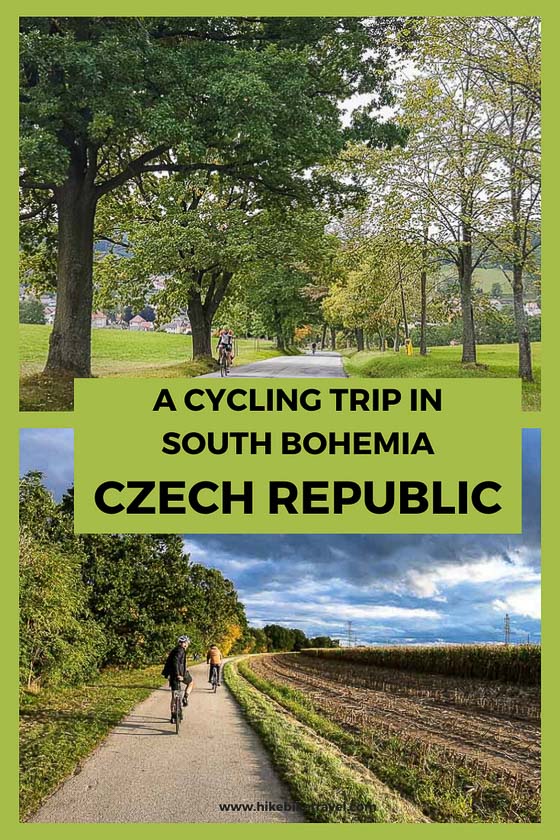