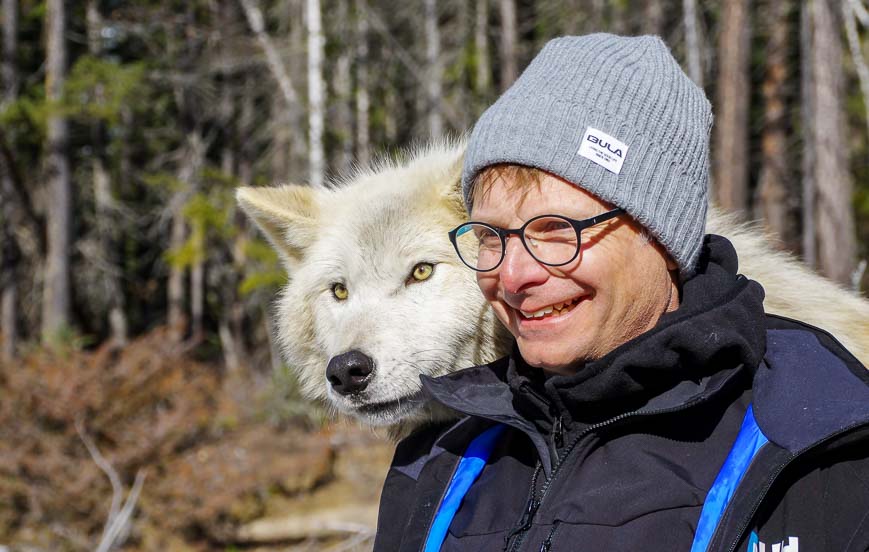 Walking with wolves in Golden

Walking with Wolves in Golden BC

The town of Golden, British Columbia is ringed by three mountains ranges. In my experience where there are mountains there are usually great hikes and walks. And that is certainly true in Golden. But just outside of Golden there is a walk that’s a little more unusual than most – dare I even say unforgettable. For it is here that you can walk with wolves in Golden BC in the wild.

There are also opportunities at the Northern Lights Wildlife Wolf Centre to learn about the wolves, how they’ve been treated – and to actually meet a lot of them.

Created in 1998 by Casey and Shelley Black, the Northern Lights Wildlife Wolf Centre is focused on educating the public about wolves. They are both passionate and outspoken on the topic of wildlife.

Their feelings about how the wolves have been mistreated by the government at all levels is laid bare. As Shelley says “we treat our wolves like vermin yet they are a keystone species and hold the balance in our environment.”

The wolf centre in Golden is also a place of hope.

Every visitor – from schoolchild to octogenarian – leaves with an understanding of the critical role that wolves play. In their handouts and in discussion with the Blacks you’ll begin to understand why wolves are so important to the environment. Repeatedly our group is told that they do not deserve the bad reputation they have.

Wolves are at the top of the food chain

Wolves play a critical role on every plant and animal in the ecosystem. That is beautifully illustrated in this video about what happened when the wolves were reintroduced to Yellowstone National Park in 1995/96.

Since then, vegetation is growing back, the beaver population is increasing, ungulate herds are smaller but healthier and birds that hadn’t been seen since the 1960’s have returned.

All the wolves at the Northern Lights Wildlife Wolf Centre were born in captivity – many in zoos. They were adopted in the first days of their lives and hand-raised. The wolf pups must be introduced early to both the pack and humans to reduce their stress level in captivity.

Walking with wolves in Golden

We spent a few hours walking with two wolves unafraid of humans – Scrappy Dave and Flora. The walk takes place off the property in the woods via a short ride in a truck. The walk we did was on public land so in theory we could meet people along the way. It’s for that reason that most walks take place in the morning.

Once we got to the starting point, the wolves are released and immediately head into the woods and start sniffing. In fact, to our disappointment, they don’t actually find us that interesting.

We walk for about 45 minutes up what seems like a logging road before heading off on a track to a stream. Over that period of time the wolves come back to the Blacks with a quick bang on a metal container full of wolf treats.

They behave much like dogs. They like to sniff and lick. If they’ve found poop in the woods they’ll have a good roll in it. And any sort of garbage is unfortunately of interest too. Occasionally they come to check one of us out – and when it happens its fun, memorable and magic simultaneously.

When we get to the stream, the wolves pose for us and with us. They seem to love mugging for the camera! 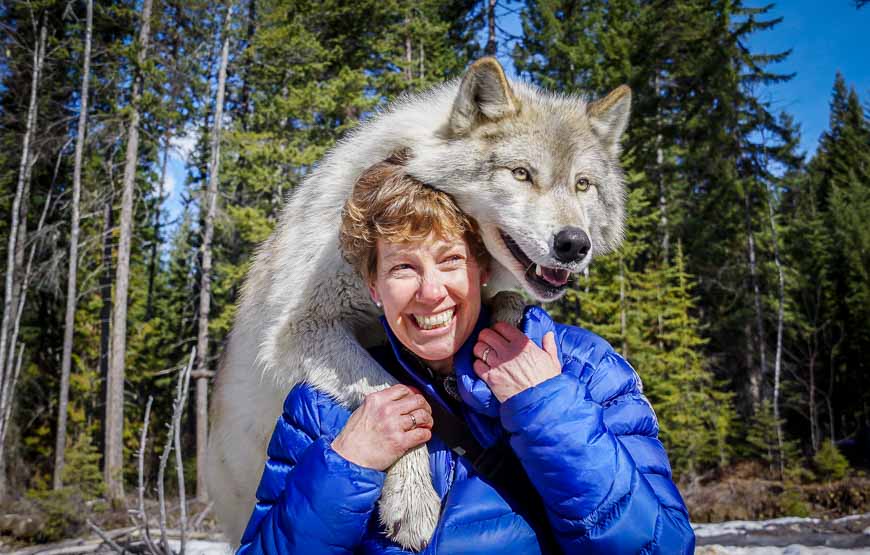 A wolf smells 100 times better than a human – with a nose that’s got 25 times more surface area than ours.

A wolf can read a smell – and can tell what you’ve eaten, where you’ve eaten and how healthy you are.

Wolves can hear approximately 20 times better than humans. They pick up higher and lower frequencies than we do.

Some wolf packs cover territories as large as 2000 square kilometres.

According to the Northern Lights Wolf Centre you can tell the difference between a wolf and a coyote by the way they run. A wolf is “smooth like a Cadillac” and “a coyote is bouncy like a Ford Escort.”

The paws of a wolf are about twice the size of a similar weight dog.

The average size of a wolf litter is six pups though only half usually survive the first year.

A wolf pup weighs about a pound at birth. They can’t see, hear or maintain their own body temperature.

Wolves comfortably sleep outside in temperatures of -40°C.

Large animals like moose, deer, elk and bison are the preferred food of wolves.

A wolf pack on average is made up of 4 – 8 wolves but they can be as big as 20 – 25 wolves in the north. Lone wolves attempt to join a pack or start their own.

Wolves can see much better than humans at night because of reflective retinas.

Wolves on average live to 15 in captivity and 3 – 6 years in the wild.

Less than 1% of all livestock deaths are caused by wolves.

Make a point to stop at the Wolf Centre in Golden

I have passed the sign on the Trans-Canada Highway pointing to the Wolf Centre at least a dozen times. Next time you’re near Golden, stop in and check them out.

They are open seven days a week and you don’t need a reservation to visit the centre – though it’s a good idea to book ahead if you want to walk with the wolves. For a 90 minute walk the price for two people is $380. Additional people are charged $138 with a maximum of six people permitted at a time.

It was an unforgettable walk with the wolves in Golden BC – and I feel privileged to have experienced it.

I highly recommend the book The Wolf – A True Story of Survival and Obsession in the West. It’s a heartbreaking read but a great one and very eye opening. 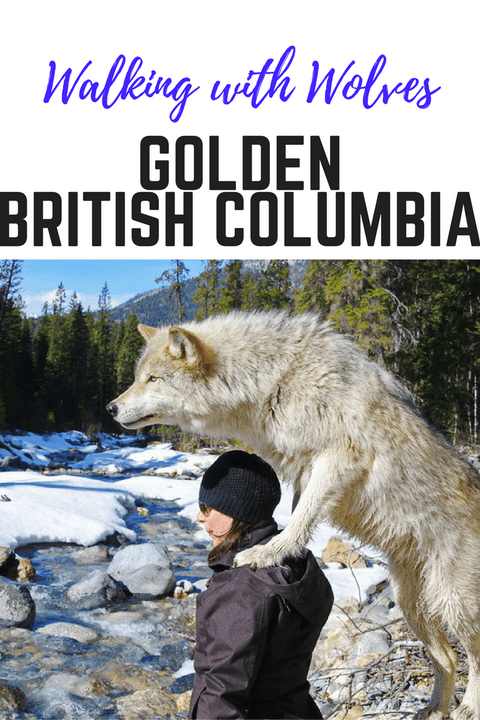 Thank you to Tourism Golden for inviting me on this walk. It was truly a memorable experience.