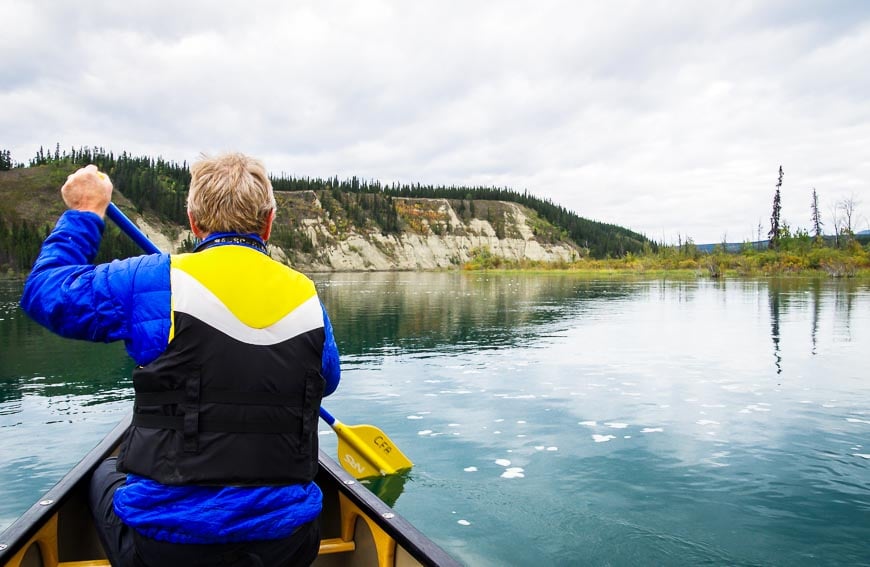 Canoeing the Yukon River to Whitehorse

You can also go canoeing on the Yukon River via a 30 kilometre section from Marsh Lake south of Whitehorse to Schwatka Lake in Whitehorse over the course of a day. The river does much of the work! That’s what John and I did as we just didn’t have time to do more. Still, it was an utter delight as you’ll see in the photos below.

Fun fact: Did you know that the Yukon River starts in northern British Columbia to empty into Alaska’s Bering Sea? Or that it has played key transportation roles, especially during the Klondike Gold Rush at the end of the nineteenth century.

The Yukon River cuts through a scenic river valley lined with white cliffs made of lake bottom sediments with the odd layer of volcanic ash. We were lucky to see two moose swimming in the river. You shouldn’t have any trouble spotting bald eagles either.

The Canyon City Heritage Site on the Yukon River

Although the Yukon River is fast flowing, especially through Miles Canyon, there are no rapids or portages to deal with on the 30 kilometre section we paddled. But there were years ago.

You can see photos of what they looked like if you pull over and explore the Canyon City Heritage Site. For over 2,000 years it has been an important campsite as it was the last safe spot before the dangerous White Horse Rapids, which have since been flooded by the dam further downstream.

Miles Canyon is a lot of fun to paddle

Miles Canyon is definitely the highlight of the day. Rocks tower above you on all sides as the river narrows and picks up speed.

In only a few minutes, you’re through it and into Schwatka Lake and the buildings of nearby downtown Whitehorse can be seen. The pullout is in a day use park on the eastern side of the lake about a kilometre after exiting the canyon.

Other trips you can do canoeing the Yukon River

There are a number of other day trips one could choose to do on the Yukon River. If you start in Whitehorse above the dam, then you can paddle to the confluence of the Takhini River or to Lake Laberge. I was happy we had time to get at least a taste of what this great river offers the paddler.

Every summer, the world’s longest kayaking and canoeing race – the 715 kilometre Yukon River Quest – takes places between Whitehorse and Dawson City. Winners have finished the race in less than 41 hours though most mortals take about two weeks to cover the distance. 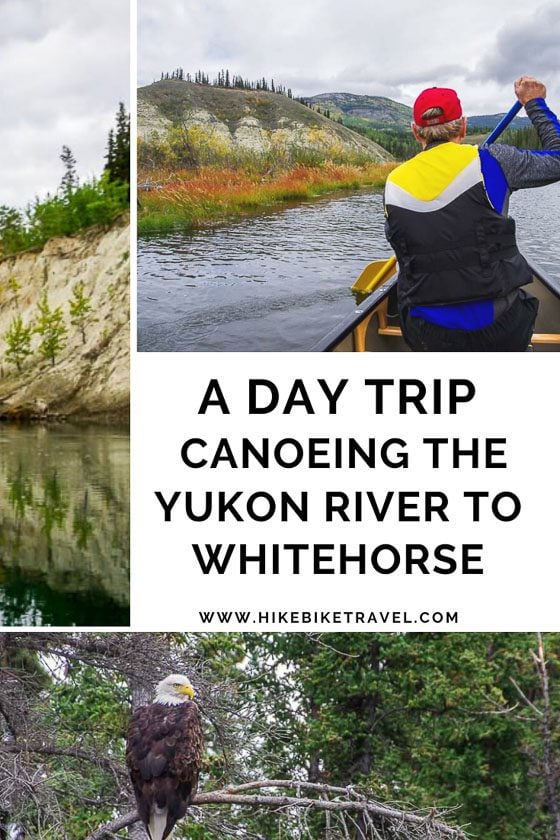