You can’t help but notice cyclists and rollerbladers on the Banff Legacy Trail when you drive the Trans-Canada highway between Canmore and Banff. But until recently I’d never cycled it.

The Legacy Trail was built in 2010 to commemorate the 125th anniversary of Parks Canada. Its 26 kilometres long one way and a very comfortable three metres wide. It takes you from the outskirts of Canmore into Banff, along Vermilion Lakes Drive all the way to the junction with Highway 1A.

Although a good part of it is dedicated bike trail, there are sections through the town of Banff that are along the road. In total there is a 185 metre elevation gain, and a 106 metre elevation loss. The Canmore to Banff section has more uphill than the return. 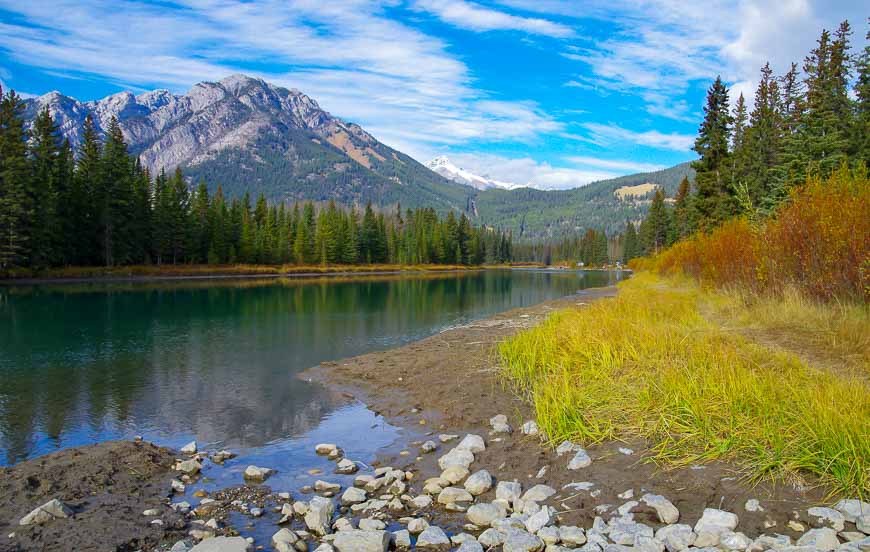 Biking from Canmore to Banff

We chose to ride from Canmore to Banff. The trailhead is a snap to find. It’s located at the Travel Alberta Visitor’s Center just off the Trans-Canada Highway. In addition to washrooms there is lots of free parking.

Although I have a yearly National Park’s pass it appeared that you didn’t need to stop and buy one as you entered Banff National Park. To do so would involve crossing many lanes of traffic. If you started in Banff you would absolutely need to have a park’s pass.

Parts of the trail have been recently repaved after being destroyed by floods in June 2013. The trail is in excellent shape now. 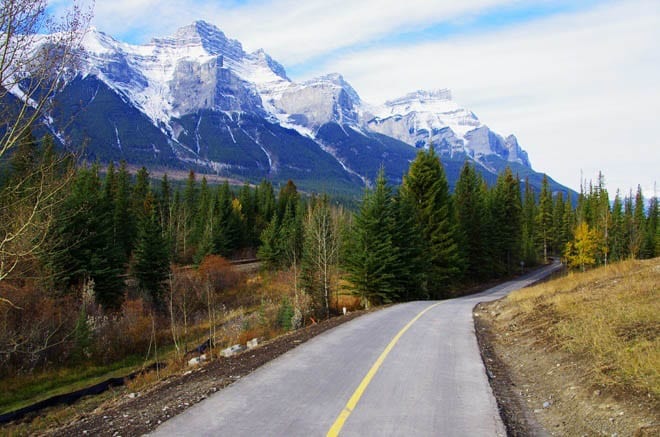 Near the start of the Legacy Trail in Canmore

My preconception of the Legacy Trail was very different from the reality.

I figured because the Legacy Trail paralleled the highway from Canmore all the way to the Banff exit, that we’d hear nothing and see nothing but cars. Although you do see and hear cars, the trail weaves away from the highway on plenty of occasions.

In fact it takes you by an extensive picnic area after cycling only eight kilometres. I never knew it existed. It affords fantastic views of the Three Sisters – a trio of peaks overlooking the town of Canmore. Interestingly I have probably driven that section of highway close to 100 times and never noticed the exit to the picnic area before. That’s one of the benefits of exploring by bicycle. 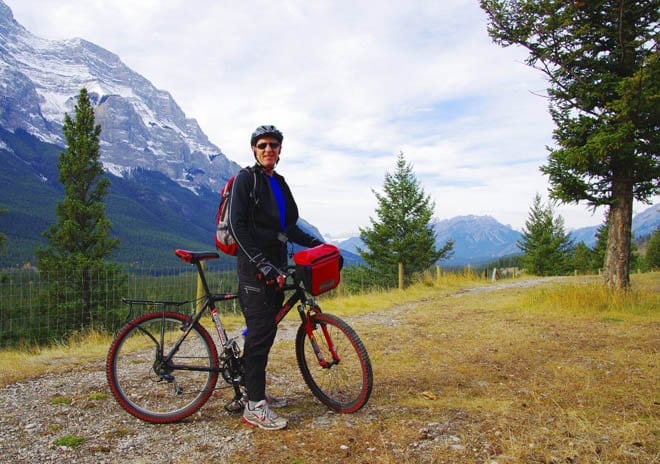 As you continue towards the Banff exit, Cascade Mountain looms in front of you. On a bike you better appreciate the majesty of this mountain the closer and closer you get. 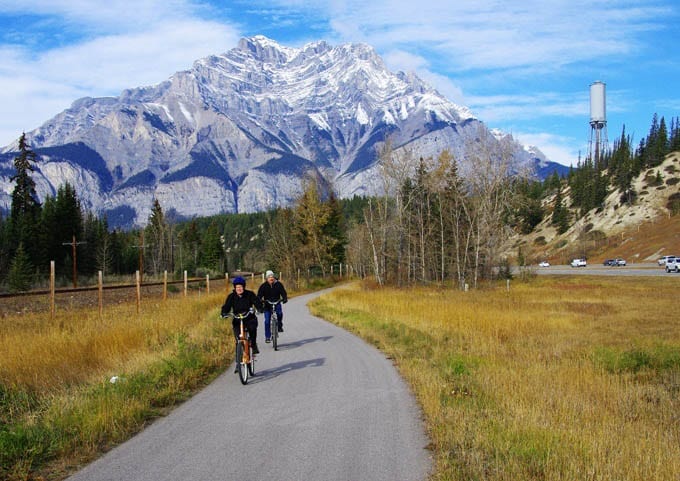 Cascade Mountain is in your face

When the trail leaves the highway, it takes a hard turn south towards the town of Banff. And after a few kilometres the trail dies out entirely. My recommendation is to weave your way along side roads to reach the town center. We stopped at Wild Flour Cafe for a latte and then made our way over to Vermilion Lakes Drive.

Again I’ve seen the Vermilion Lakes every time I’ve driven the highway but I didn’t appreciate that there was a road alongside them, complete with several docks where you could launch a canoe or kayak. The views of Mount Rundle from along this VERY QUIET road are superb! 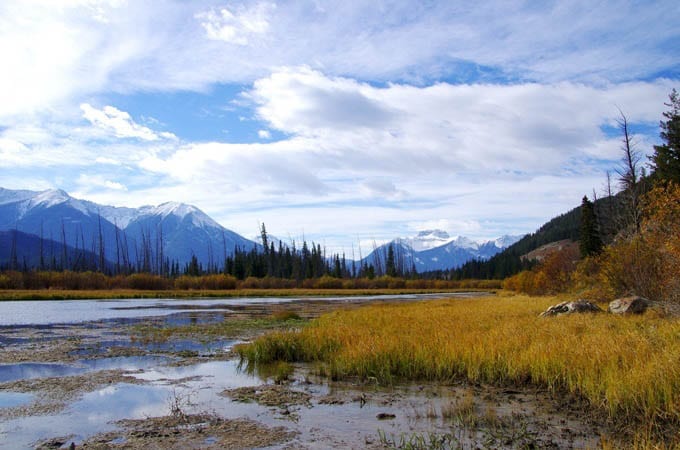 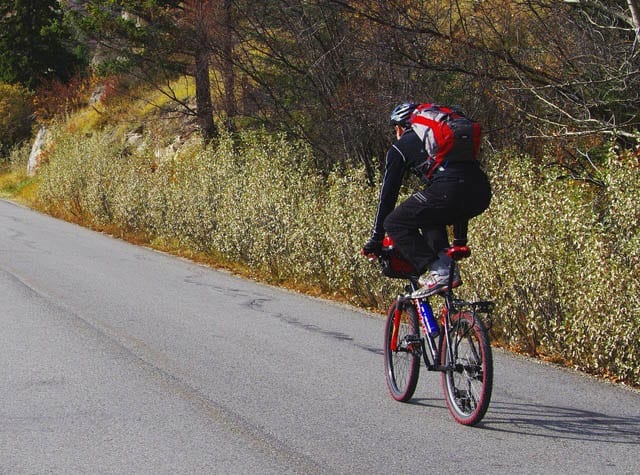 My husband still thinks he is 16 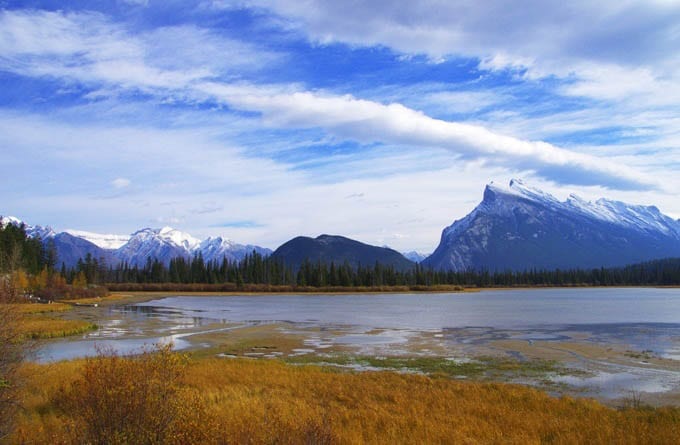 When you pass the last of the Vermilion Lakes you’re onto dedicated bike trail again all the way through to the junction with Highway 1A. There was hardly a soul on this part of the trail last weekend – and it’s where we were lucky enough to see a moose chomping away in the field. 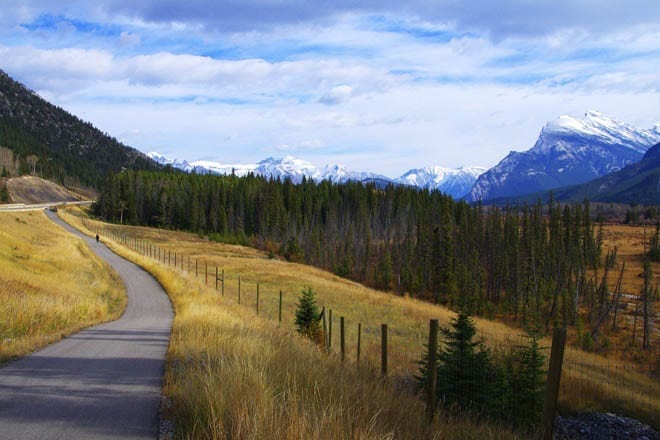 Beautiful section of trail near the intersection of Highway 1A 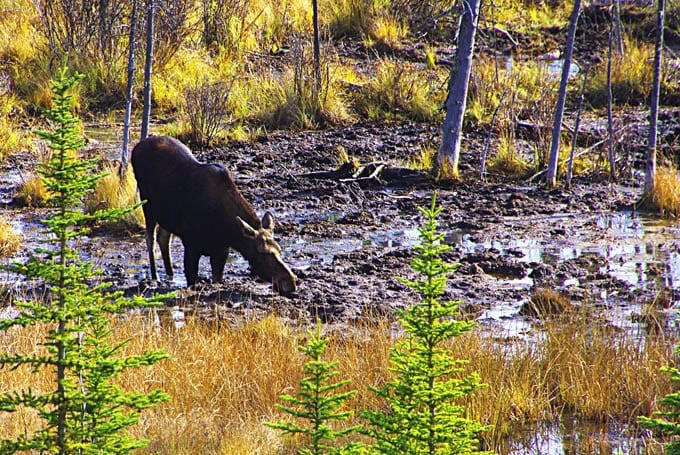 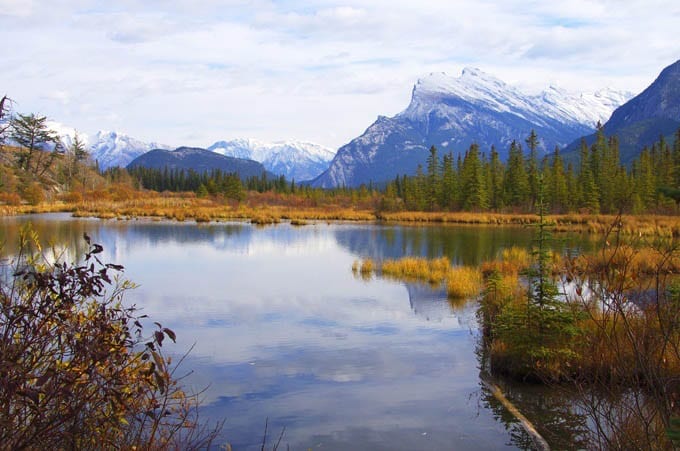 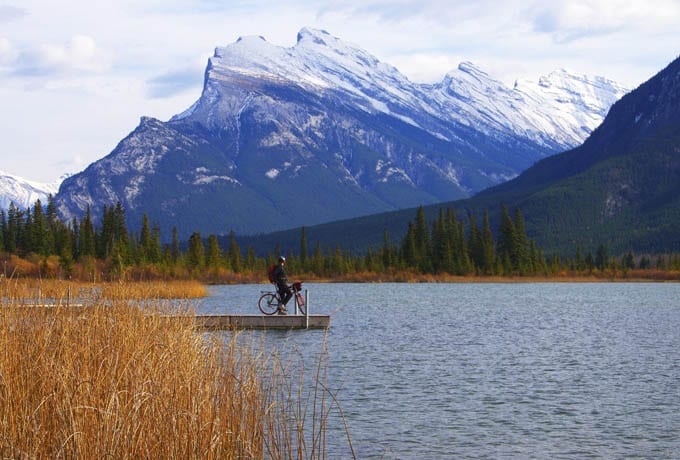 On our return to Banff I stopped to get these two shots of the train tracks. 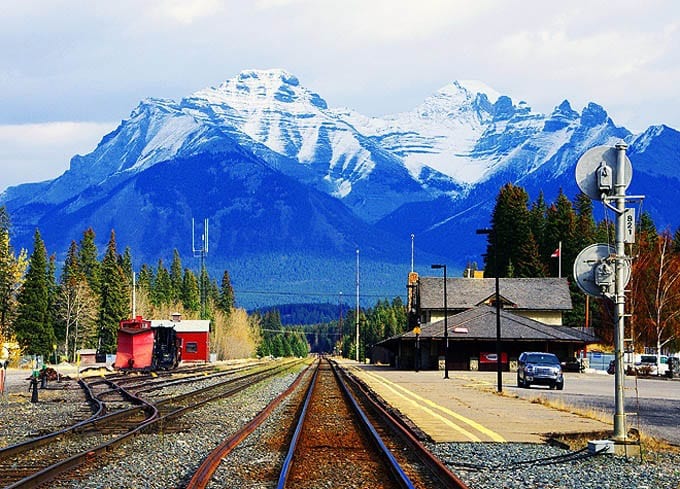 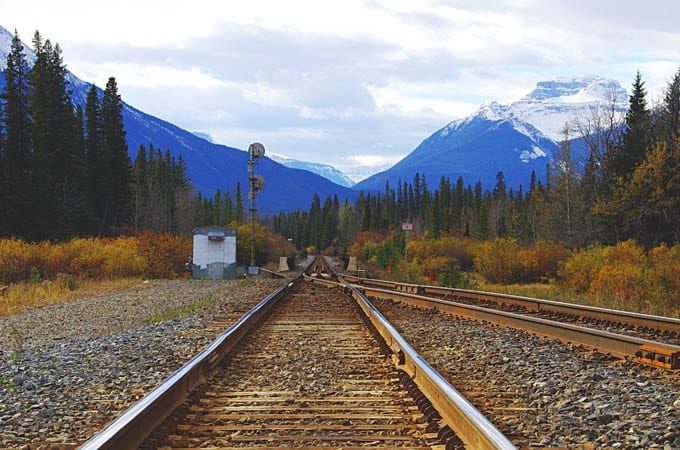 Looking the other way down the tracks 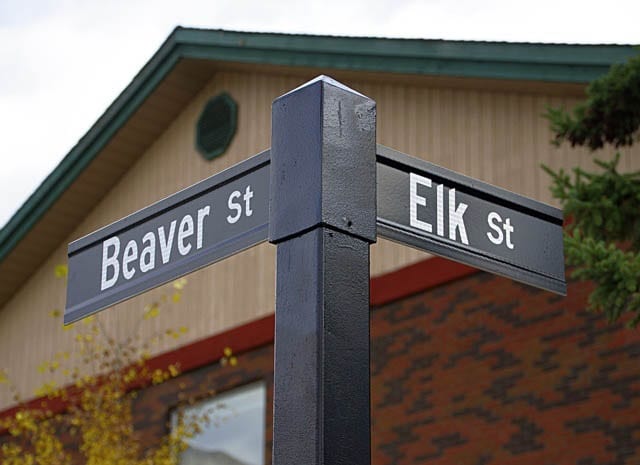 Cycling back to Canmore from Banff took no time at all. The wind was at our back – by some miracle – and there was more elevation loss than gain. It took us less than an hour with time for photo stops. 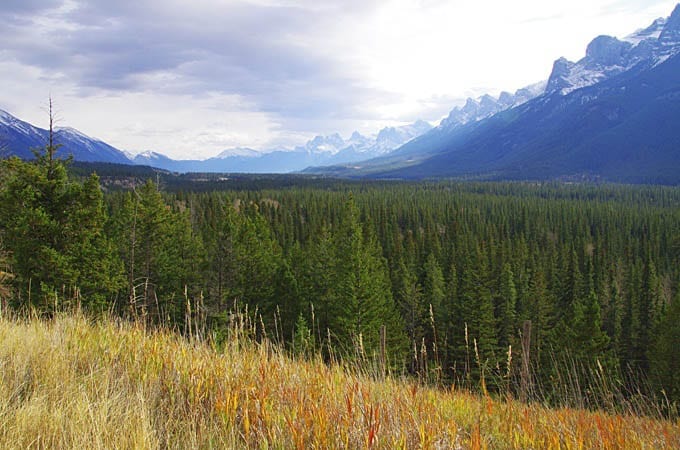 The Three Sisters mountain range as one approaches Canmore

The Banff Legacy Trail is a well-used trail. It’s easy enough for families to cycle and it’s a great way for out of town visitors to experience the Rockies. Bikes can be rented in Canmore from Gear Up Sports, located across from the hospital. In Banff you can rent from Soul Ski and Bike or Snowtips-Bactrax.

The season for cycling goes from late April until sometime in October. We were very lucky to have a warm day on an October weekend. At some point an extension of the trail to the Canmore Nordic Centre should be complete.

If you like cycling don’t miss a chance to explore the Banff Legacy Trail.

Other posts about biking in Alberta you might enjoy: The Hike to Burstall Pass in Kananaskis Country

The hike to Burstall Pass happened by accident. On a summer Sunday our extended family…

The Stunning Hike to Buller Pass in Kananaskis Country

The stunning hike to Buller Pass takes only four - five hours round-trip. It's one…